Meet ‘Instastories’! I’ve been looking for a fun way to share my Instagram photos here on Cider with Rosie for a little while now, and think ‘Instastories’ is the one! I’ll be sharing little stories alongside each photo, that would otherwise have been lost in the interest of Instagram caption brevity. I really, really hope you like it :) 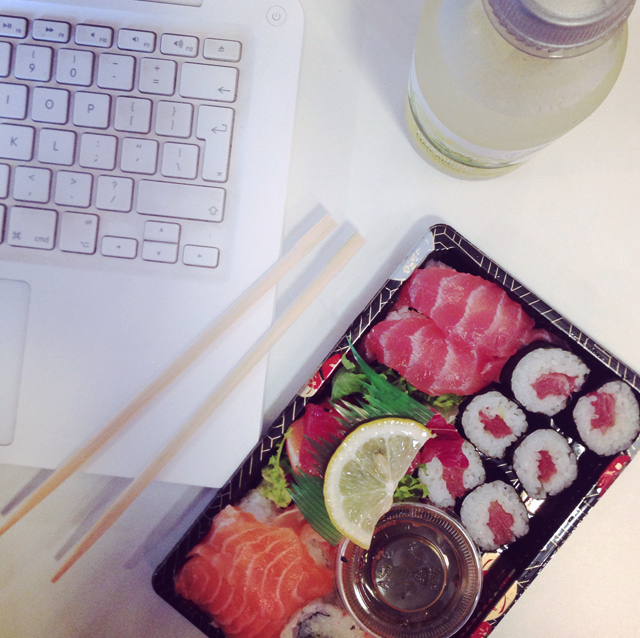 Captured: Last Friday, when I spent the day at Jason’s offices working my way through writing a couple of magazine articles.
The Story: I kind of consider sushi-for-lunch a mandatory thing whenever I spend the day working in Guildford. It seems a shame to have a stodgy sandwich for lunch when I’m within walking distance of Kokoro, on North Street. My favourites are the tuna sashimi & the salmon and avocado rolls. This lot kept me going for hours, which I was glad of. Jason was glad that it didn’t take too long for the smell of sushi to clear from his meeting room ;) 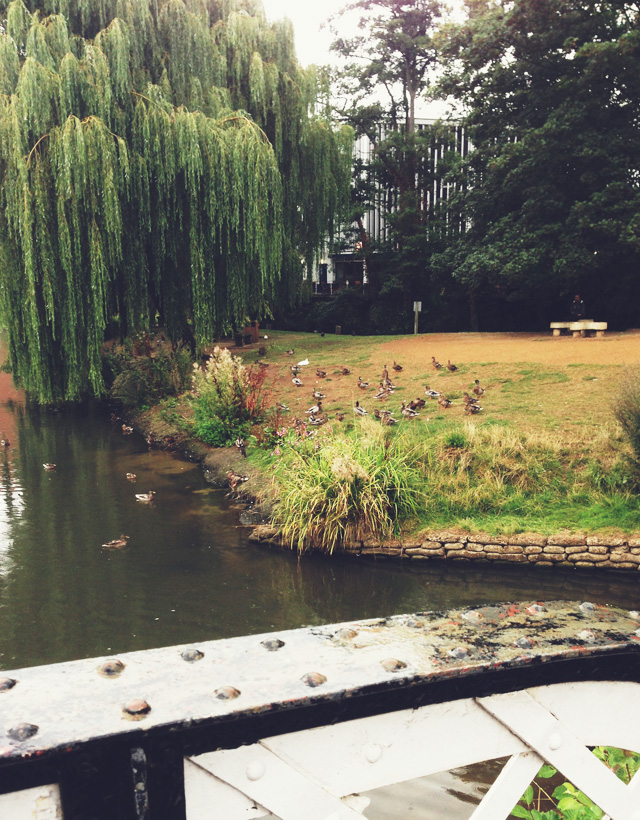 Captured: As Teddy and I were finishing our morning walk along the canal in Guildford.

The Story: It took all Ted’s powers of self control not to go charging off into that group of ducks. He hates them with a passion, though not quite as much as he loathes pigeons. Jason spotted a few ducklings on the canal the other week, but I didn’t see any on our travels. It was pretty soggy that morning, and my sock got wet for the billionth time since my Hunters forgot how to welly boot and stopped being waterproof. I’ve now taken to wearing a plastic bag inside my left welly, to stop my feet getting wet. It’s classy stuff, I tell you. 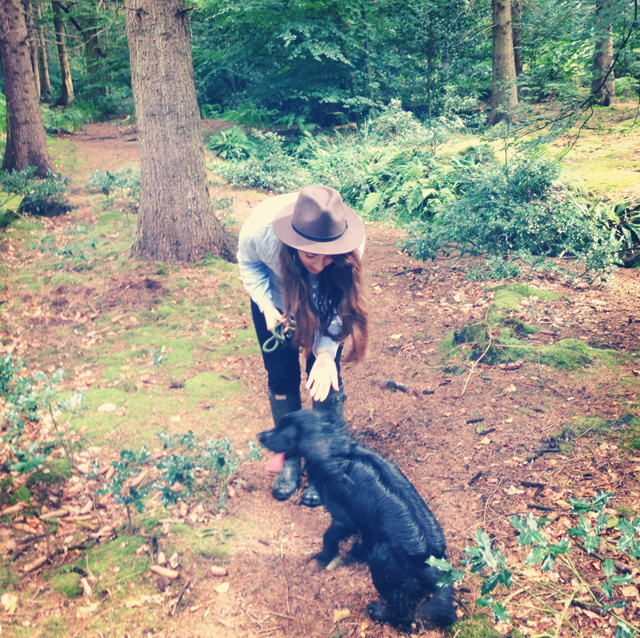 Captured: At the very beginning of our Saturday morning dog walk.

The Story: I finally took Jase up to the bluebell woods on Saturday morning, after Ted and I fell in love with them months ago. We’ve not been able to walk up there all summer, since the deer ticks became such a problem and poor Ted had had enough of us tugging bugs out of his skin every night. Even though the bluebells have long since died away, it’s pretty beautiful up there. We especially enjoyed walking on the thick moss, because it was so springy it felt like walking on a trampoline. On our walk I learnt that if I wear that panama hat with my green dog walking jacket, it instantly stops looking vaguely cool and ‘fashiony’ and instead makes me look like someone who regularly plucks and butchers freshly caught pheasants. You know the type? Not that there’s anything wrong with being *that* person, of course, it’s just not the look I’m ever likely to be going for… 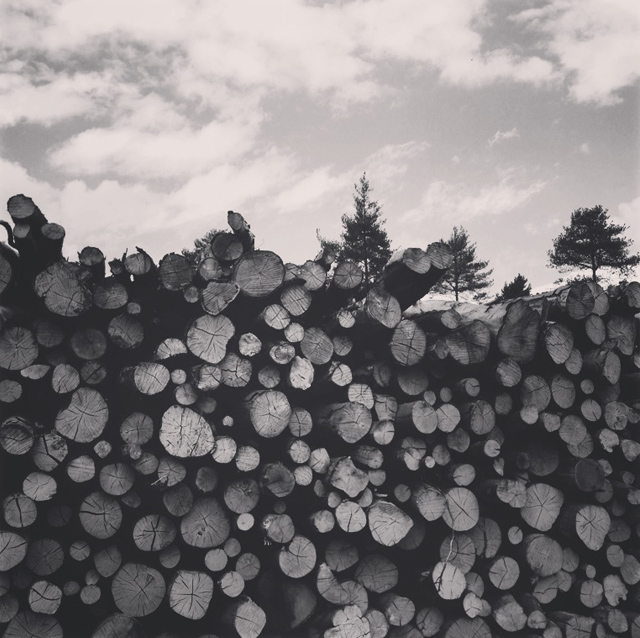 Captured: At the end of that same Saturday walk.

The Story: Jason has this *thing* for walls made out of stacked logs (the type you find in lush Italian restaurants, you know?) and so stood for ages admiring this handsome pile. We’re thinking we might have this photo blown up and framed, we like it so much. 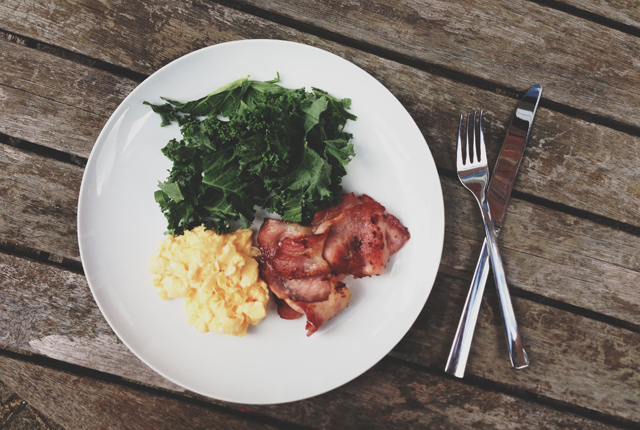 Captured: Late Sunday morning, after I stayed in bed for as long as possible to make the most of it being Jason’s turn to get up with the dog…

The Story: This was brunch. I’m still doing the low carb thing, so I had kale in the place of what normally would’ve been a slice of toast (or two). I’m pretty obsessed with kale at the moment. I love how rich and irony it tastes, and how well it stands up to dressings that normally wilt lettuce in five seconds flat. I’m planning on having a go at making kale chips soon, so will let you know how that most hipster of activities goes down… 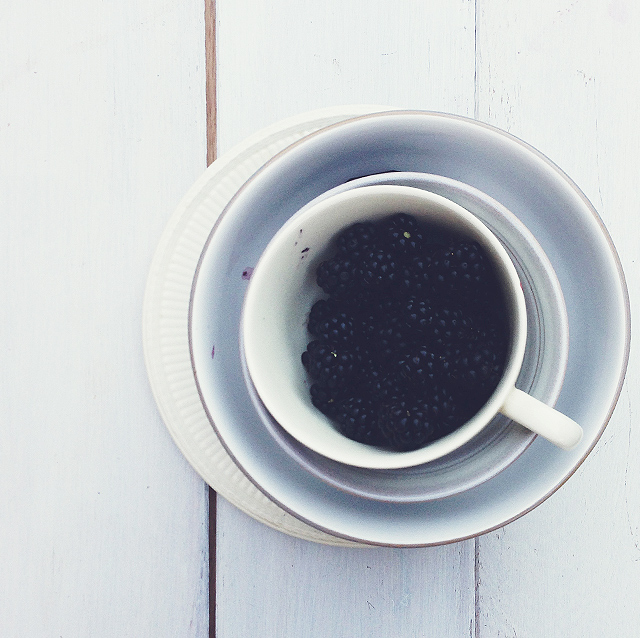 Captured: Just as I was tidying up dishes, having taken these photos of my blackberry bounty.

The Story: I can’t seem to find many more blackberries growing locally for my jam project. I guess I could go and buy some (there’s a great farmer’s market at the university I attended not too far away) but it somehow doesn’t seem as satisfying as preserving handpicked produce. And now it’s two post in a row I’ve written about blackberries, so I promise I’ll stop. 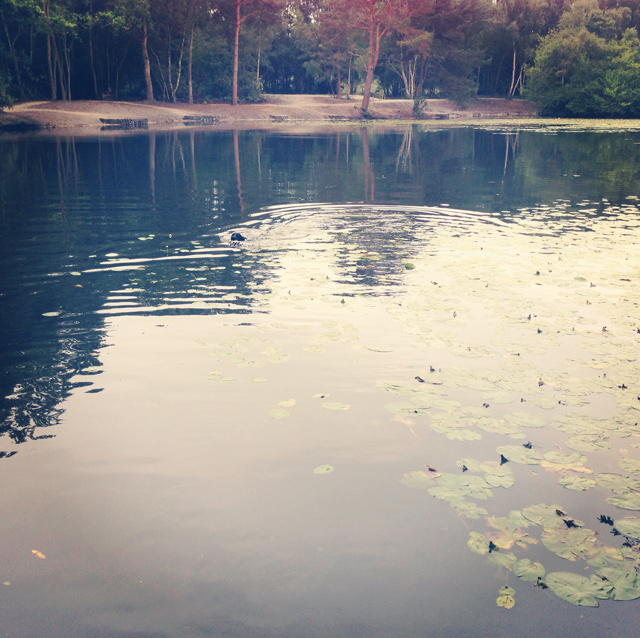 Captured: With my phone’s remaining 1% of battery, on our Monday morning walk.

The Story: Just before I took this photo, I threw a big stick into the water for Ted to go and fetch. We were standing next to a little wooden jetty, and when I released him to chase after the stick he plopped into the water next to the jetty and began to swim after it. After about three paces though, he turned round and climbed out of the water. I thought maybe he’d decided it was too far to swim, and that he couldn’t be bothered to retrieve it. But no! He’d obviously felt his first entry into the water wasn’t quite fun enough, so backed up, took a little run up, and then leapt off the jetty into the lake and continued swimming until he’d got his stick back! I can’t quite express how much I love that little dog of ours, and his eternal ridiculousness :) 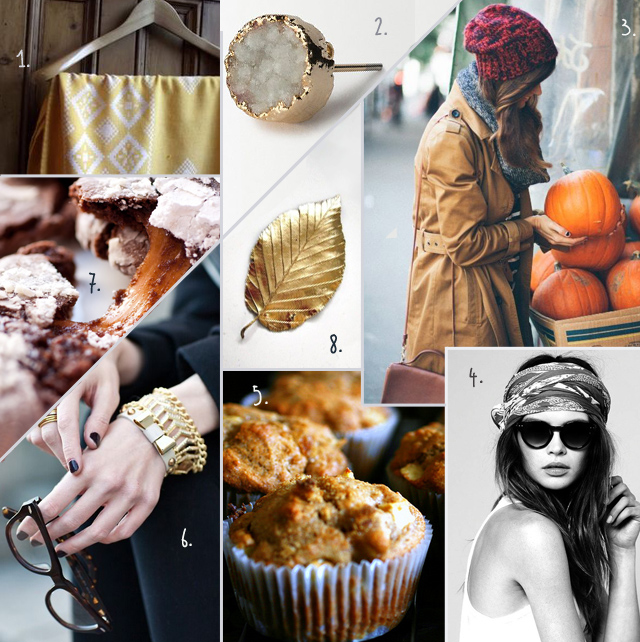 1. A soft yellow print scarf. Wouldn’t it look so pretty all draped and bunched alongside a tweed jacket?
2. Roughly cut gold and amethyst earrings. I bought Jo a similar pair of uncut diamonds for her 21st last year, and have been hankering after a pair of my own ever since!
3. This tan trench coat.
4. Bohemian head scarves. Are they too summery to be worn in autumn though, do you think?
5. Wholewheat apple muffins. I made blueberry muffins the other day, and even though I cut down the sugar massively (370 grams down to 250!) they were still far too sweet for my taste. I think these ones from casa del Smitten Kitchen sound wonderful.
6. Chunky gold bracelets and navy nail varnish.
7. Caramel chocolate crinkle cookies. I could look at that strand of caramel aaaaaall day! ;)
8. A leaf, gold-leafed.

Left// I ate avocado toast for the first time ever a couple of weeks ago, and can now join the rest of the planet in agreeing that it’s totally delicious. Right// Pyjama pants and bright pink shoes. 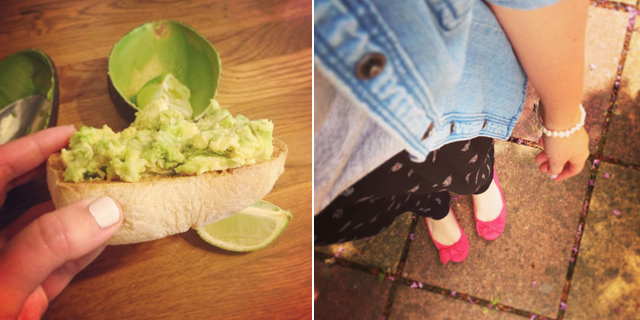 Left// Just those churros, again. Right// We found a new path through the woods that takes us under the tallest trees. 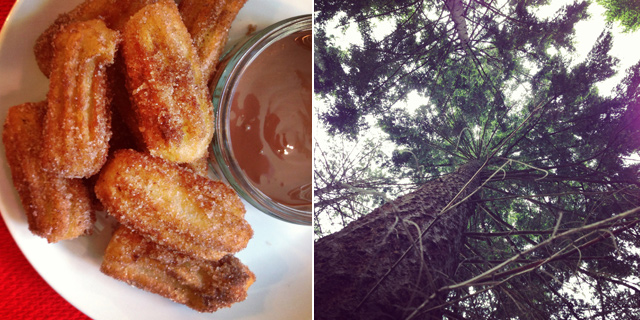 Left// Those buttercups made me happy. Right// He gets muddy paws every.single.day. 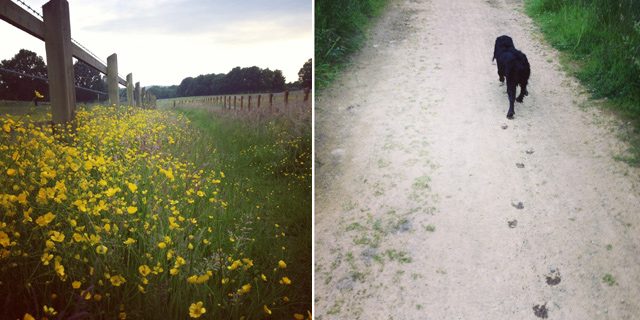 Left// There’s hardly any space for Teddy to swim in the lake now, since it’s been completely taken over by lily pads. Right// She was an absolute sweetheart. 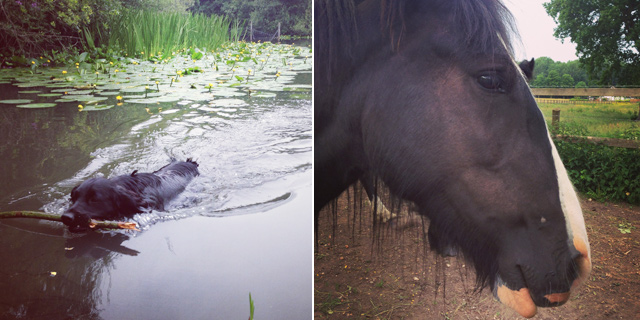 Left// I made coleslaw, and used my mandolin for the first time. I nearly shredded my fingers a few times, but it was weirdly satisfying being able to chop the carrot so uniformly. Is that weird? Right// That plant pot lasted about three minutes before he started to chew it up, and I took it away from him. Ted was not happy to give it up, I can tell you. 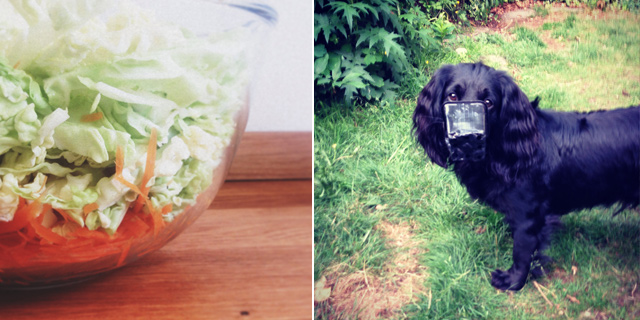 Left// Homemade pasta. Another minute or so of kneading, and that dough was ready. Right// Heaping bowlfuls of fresh tagliatelle with pesto and parmesan. 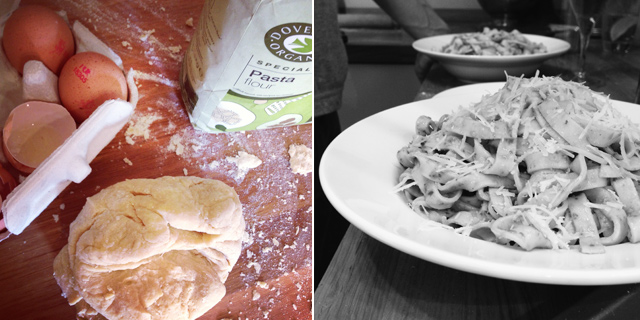 Left// Maybe my all-time favourite photo of Ted. He’s been obsessed with curtains ever since he was tiny. Right// Risotto with mushrooms and fresh (kind of homegrown!) thyme :) 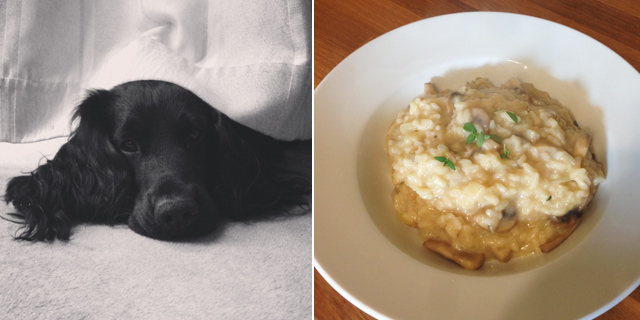 Left// I bought some peaches, and accidentally left them in my car for two days. It made them even riper and juicier than they were when I bought them. Right// This one tasted amazing smooshed onto toasted sourdough for breakfast. I’m all about fruit on toast at the moment. Can’t get enough. 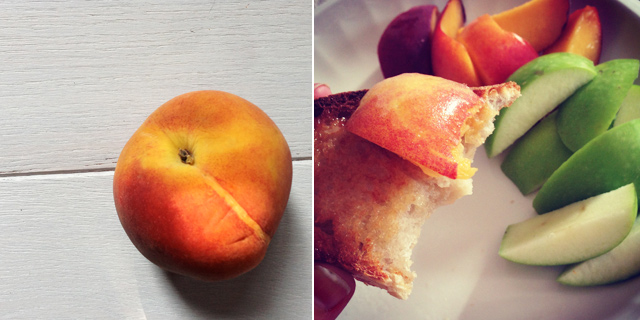 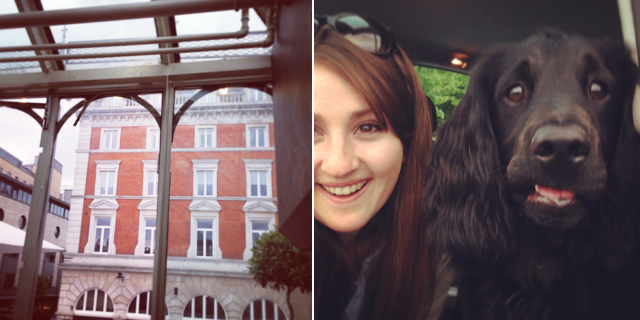 left// i finally fulfilled a life ambition the other day, and had tea in one of the rooftop terraces in covent garden! right// i love that drooly little man of ours :) 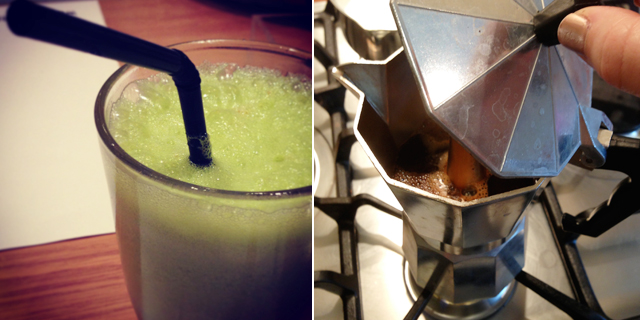 left// can’t get enough of those wagamamas green juices. right// i like to watch the espresso bubble up into the top of the pot. 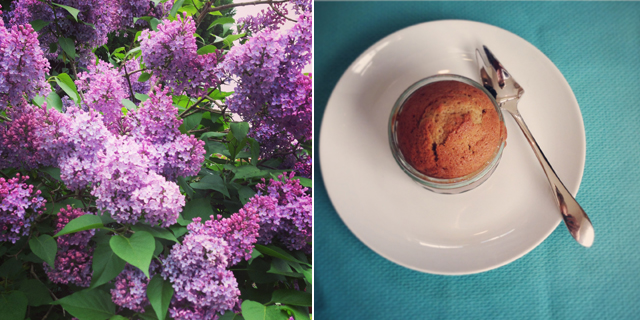 left// we walk past these lilacs most days on our way to the woods. the scent stops me in my tracks every time. right// left over batter led to individual banana cakes. yum! 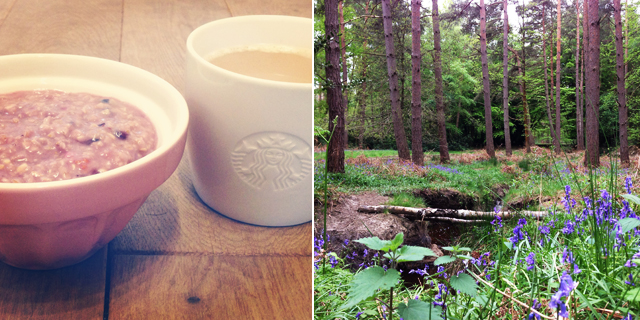 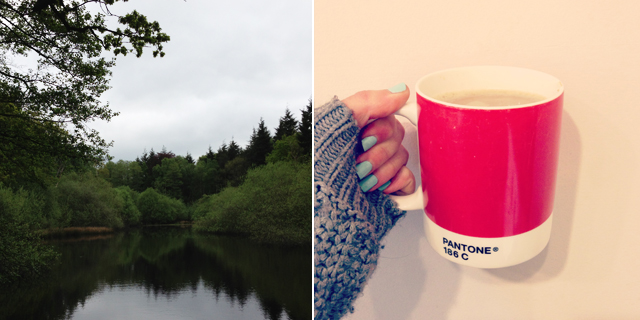 left// doesn’t this look like a scene from a twilight movie? right// it was a baggy jumper and latte kinda afternoon. 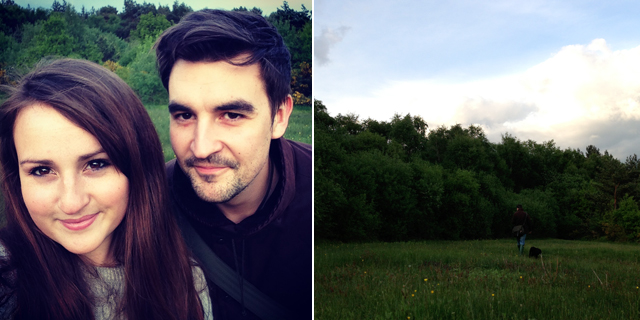 left// i love him so much. right// they’re hard to spot, but jason and teddy are walking off into the dusk in this photo.
left// gnocchi in a cheddar bechamel sauce with stilton and apple, a.k.a. the world’s most unnecessarily fancy lunch. right// i always look for four leafed clovers, but never manage to find any. maybe one day… 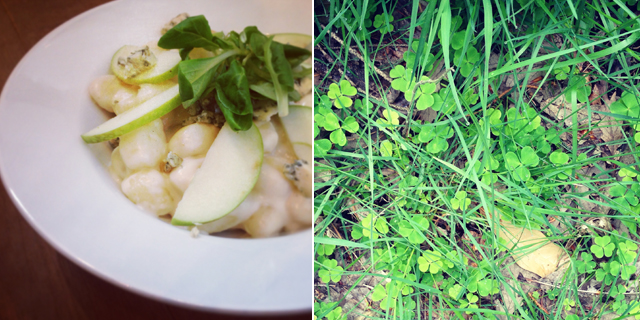