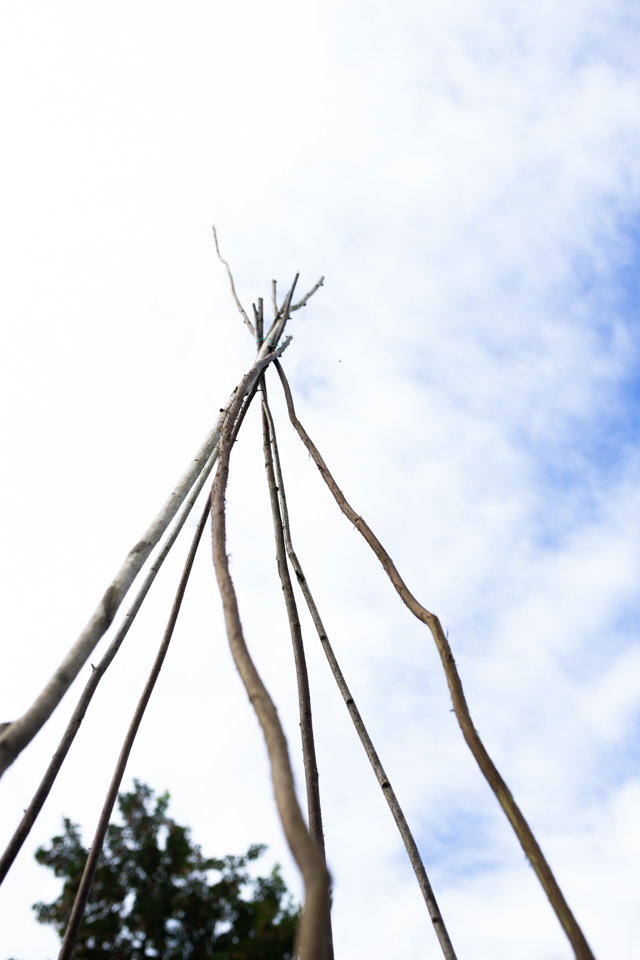 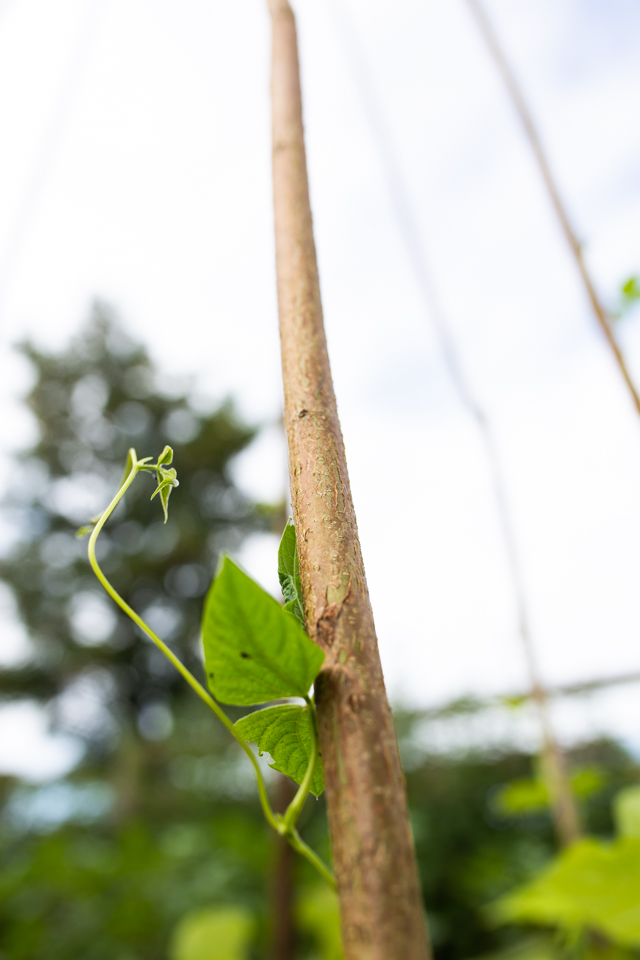 Oh, June. The dreamiest of months, where the plants seem in a race against one another to show off who can grow the tallest, climb fastest, sprawl widest. I’m utterly obsessive about my daily (okay twice, or sometimes thrice daily) wander down to the vegetable patch to observe, tend, harvest, and water, and now that there’s often a pod of peas or two to snack on whilst I’m down there, all the better.

The jobs seem as constant as ever this month, with successional rounds of seeds to sow, the first row of potatoes to harvest, and a jungle of tomatoes to support in the greenhouse. My most-used phrase these days seems to be ‘I’m just popping outside to do X/Y/Z, be back in 5′, and half an hour later I’m still outside, with hands caked in soil and half a dozen jobs ticked off my endlessly updated to-do list. 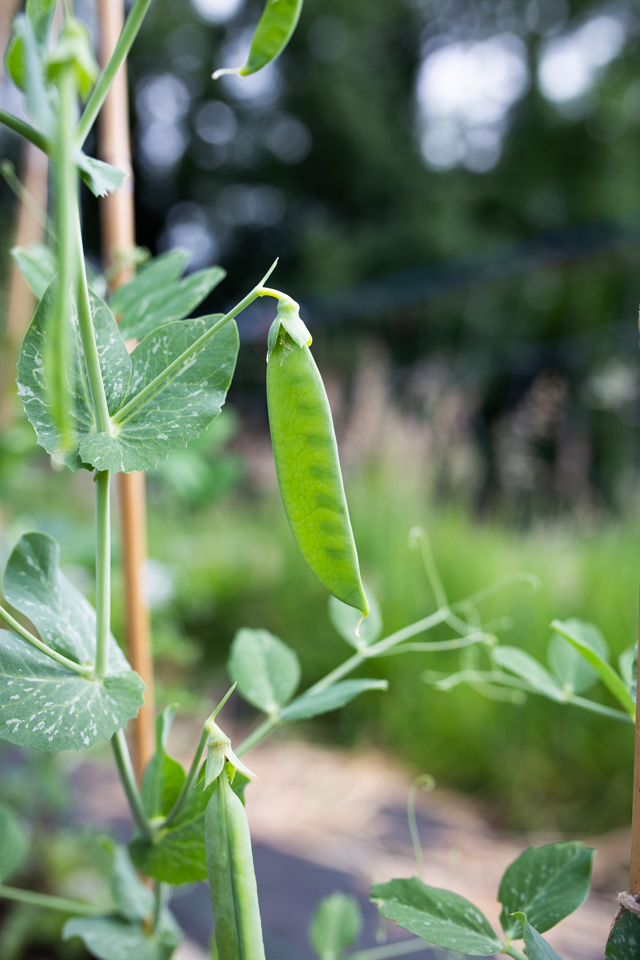 If there’s one most important thing I’ve learnt so far this growing year (and there’s been many things I’ve learnt), it’s that I can afford to sow three, four, five times as many pea and bean seeds and still have plenty of space to spare! In fact, that’s been my lesson in general this year, that it’s much better to have spares, extra spares, and a few more as backups rather than too few and risk being left with gaps in the beds and a sparse crop!

Especially since things like peas and beans ripen just a few at a time on each plant, I’m learning that to gather a really decent harvest in one go you need a LOT of plants! They really are so delicious though, sweet and tender straight from the pod and wonderful cooked into a pasta or risotto dish.

I’ve just sowed a new batch of petit pots peas (the variety is ‘Calibra’) to take over when the ‘Kelvedon Wonder’ main crop peas are done, and will be sowing some broad beans to overwinter in late autumn this year ready for the following spring. 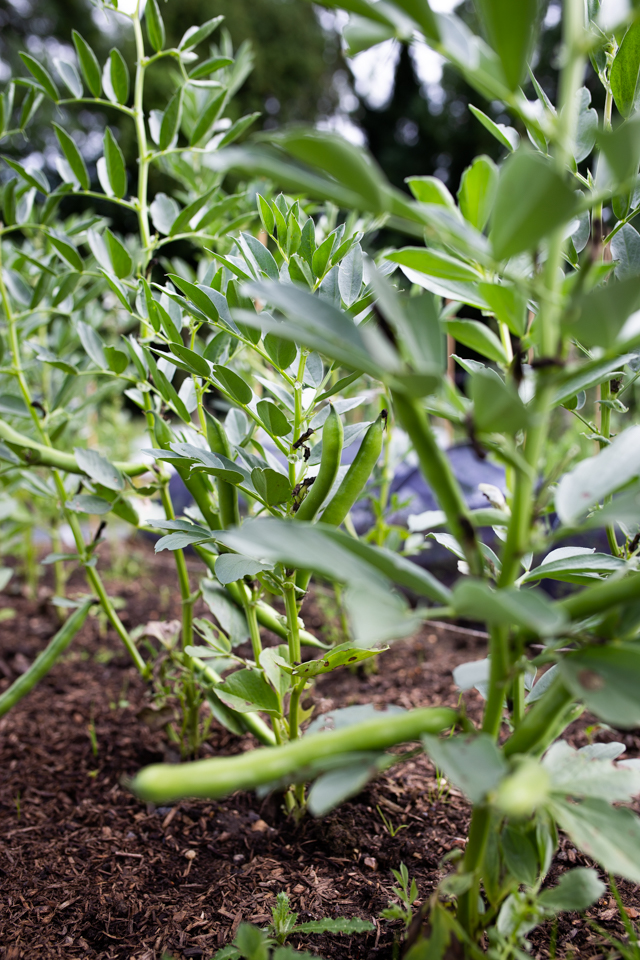 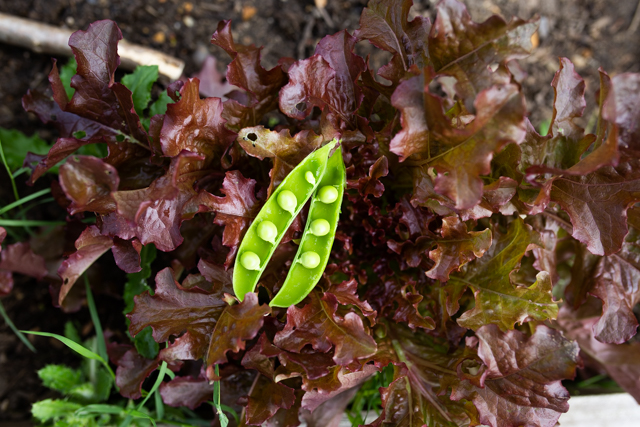 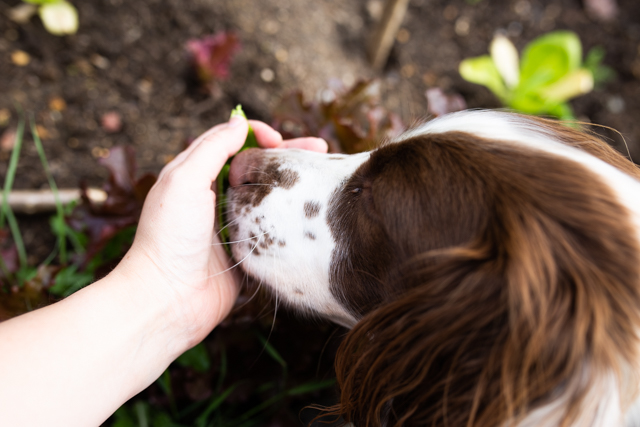 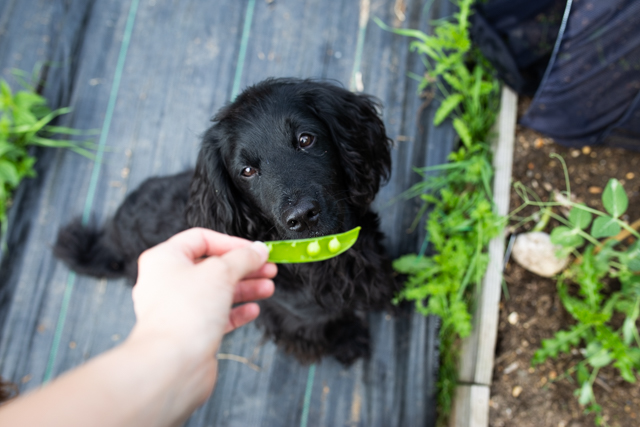 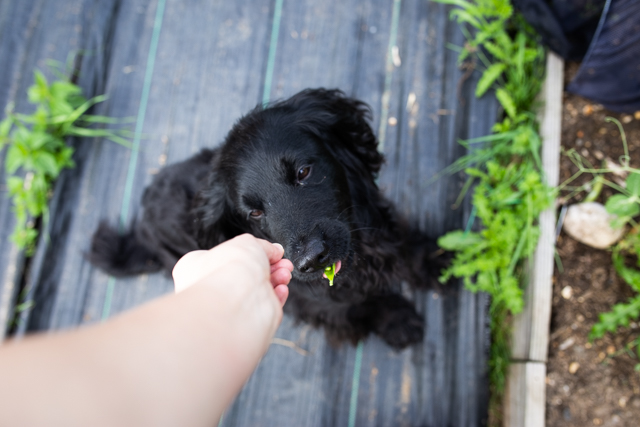 (Between Ottilie and the dogs, who all are more than partial to a pea pod or two, it’s a wonder I’ve even managed to get a look in this year. Roll on the sugar snaps!) 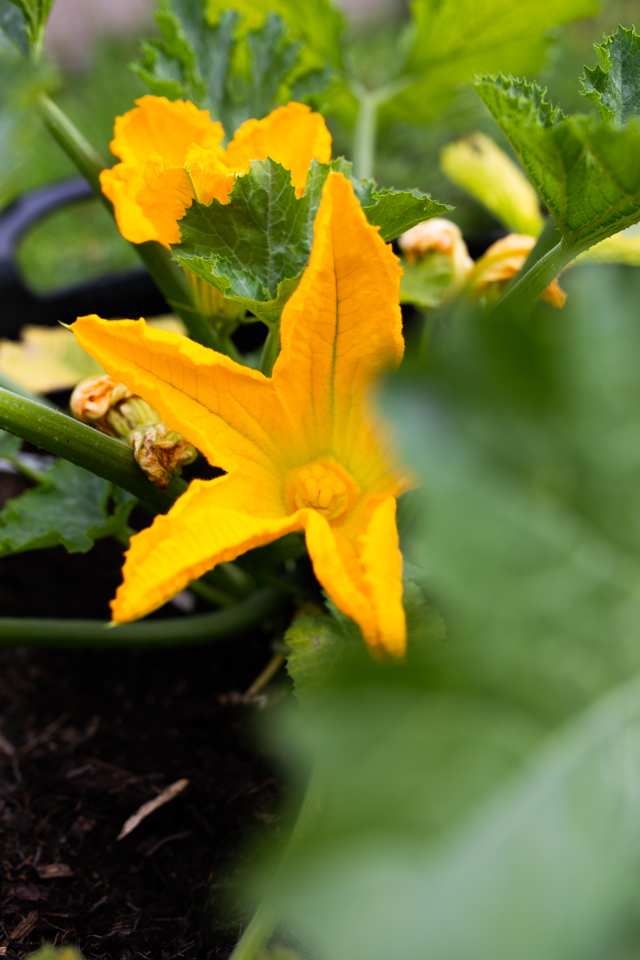 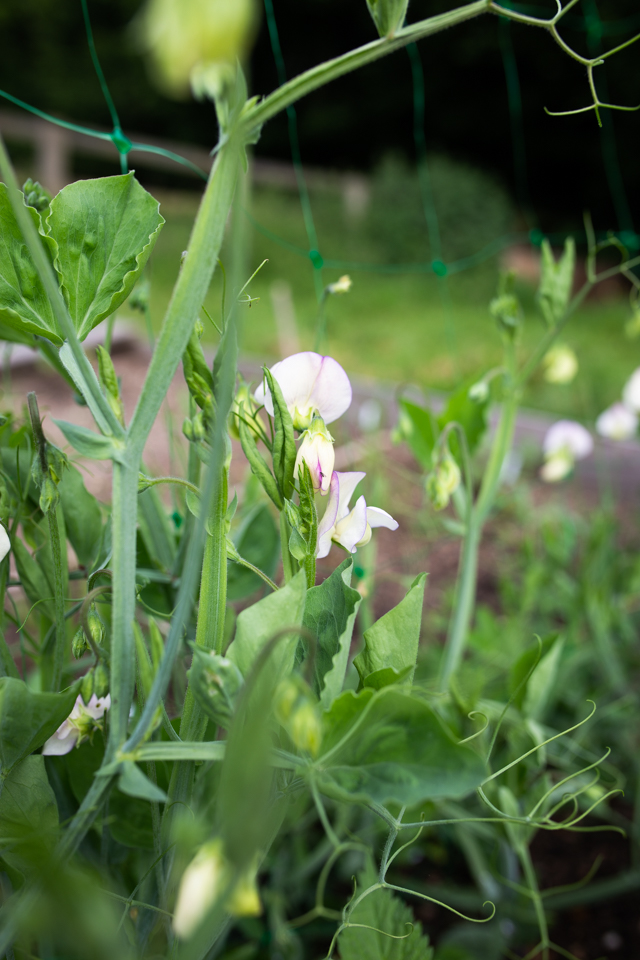 …some bringing the promise of food, and others merely for show!

It was actually Ottilie who put the ‘Lady Salisbury’ sweet pea seeds into a little tray of compost back in January of this year, with more care and dexterity than I ever expected from her tiny, then-16 month old fingers. And now look at them! They’re the most gorgeous variety, with each bloom having a unique pattern of lilac tinging around its white petals. I cut the first little bunch today, actually, and Ottilie was so proud to carry the tiny vase I’ve put them in into her bedroom and up on the mantlepiece.

And much less delicate, but equally as exciting for the promise they bring, are the courgette flowers! Big, bold, blousy- a screaming yellow beacon amongst the muted green and brown tones of the vegetable patch. It’s the ‘Soleil’ courgettes that are first to flower, two plants ready and raring to go with at least five little courgette babies on each and a couple of fruits already a few inches long and only a week or so away from harvesting I should think.

I’m sure I’ve said before but growing my own courgettes last year absolutely ruined all shop-bought varieties for me, in fact, I’ve not bought a single one single before last summer’s glut began! I’ve got three varieties all romping away in the garden right now, and am already dreaming of the light summer pastas, ratatouilles, risottos, curries, pickles, and even cakes I plan on making with their fruits this season. 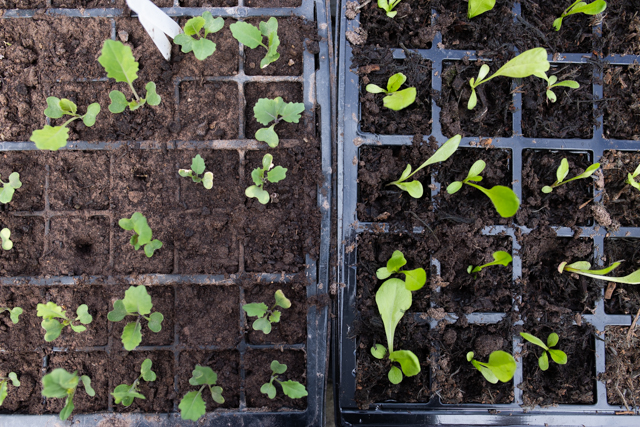 ^^ Always and forever tending to trays of seedlings- above are purple sprouting broccoli and winter savoys on the left, mixed radicchio on the right, and just out of shot is my next tray of lettuces ready to go…

In the greenhouse are trays of swedes, winter carrots (attempting multi-sowing in cells!), kales, cabbages, and some more runner beans all sown just this weekend, because I promised my mother-in-law an ample summer supply of her favourite runner beans and so must deliver! ^^ 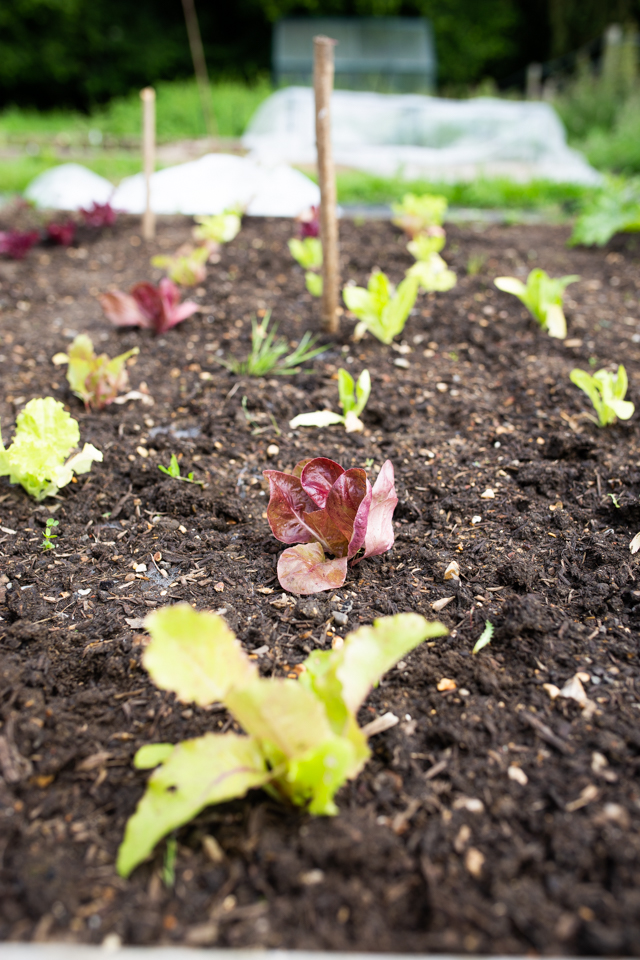 Now, I like to think that so far this year I’ve done okay. Most things have germinated, I’ve overcome issues with imbalanced soil and still-unidentified diseases in my broad beans and a courgette plant that sulked for weeks after planting out, but lettuces? That most easy, foolproof of crops? It’s been a nightmare!

One variety of seeds just would NOT germinate, despite me trying another packet of the exact same type, and all those I’ve got to planting-out stage have grown so very slowly I’ve only just begun picking the odd leaf here and there! In fact, most have stubbornly refused to grow at all ever since planting out…except the ones that were munched to the ground by rabbits, and now have come back as full, beautiful lettuce heads. 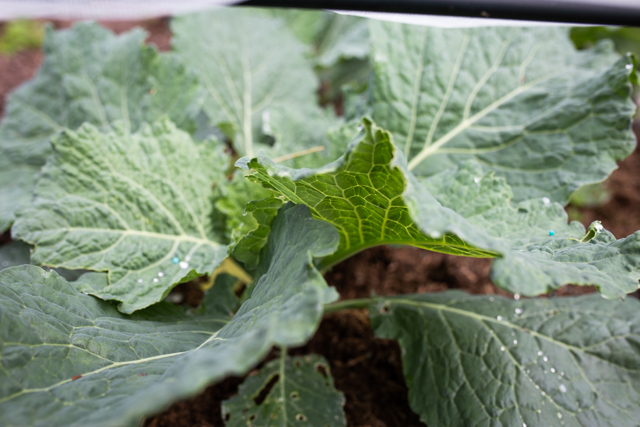 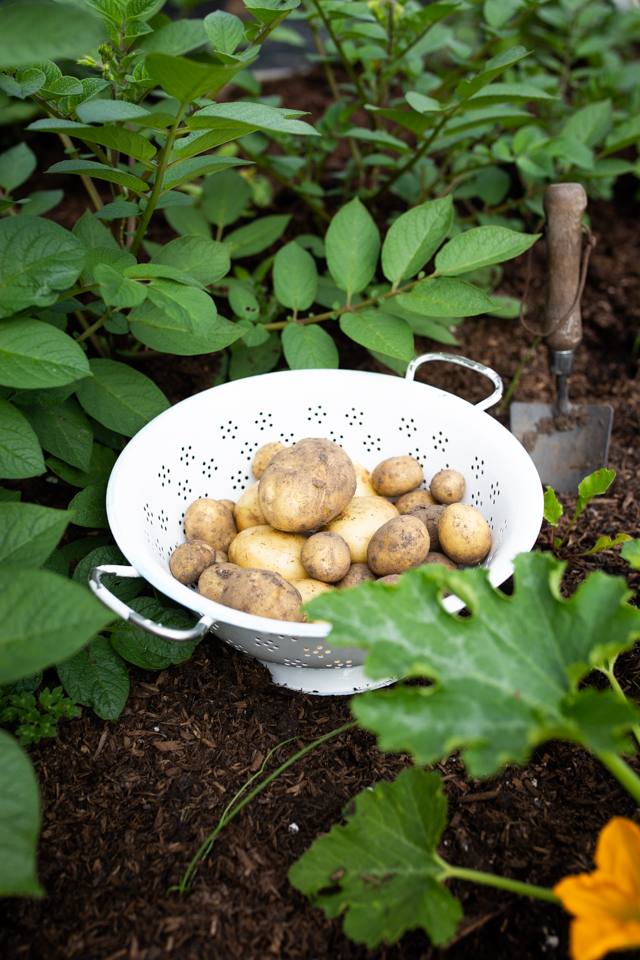 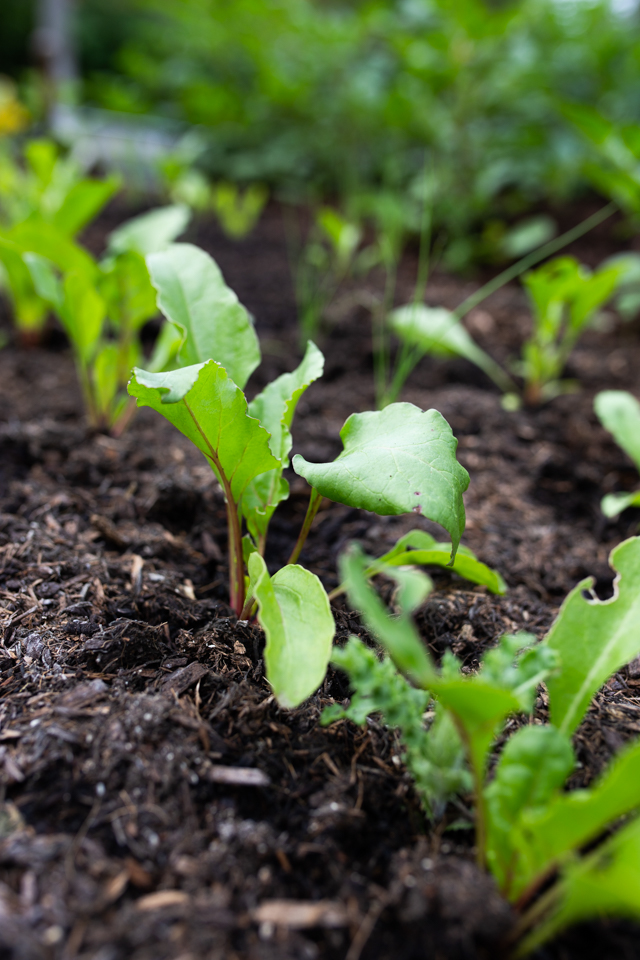 And lastly, happy and flourishing are the ‘Chioggia’ beets, a pink and white striped variety I just can’t wait to cut into and taste, the ‘Swift’ first early potatoes are up and mostly eaten and all completely delicious, and a supposedly mini, two-foot wide Savoy cabbage that is just beginning to heart up and is my pride and joy!

What’s growing for you, this month?