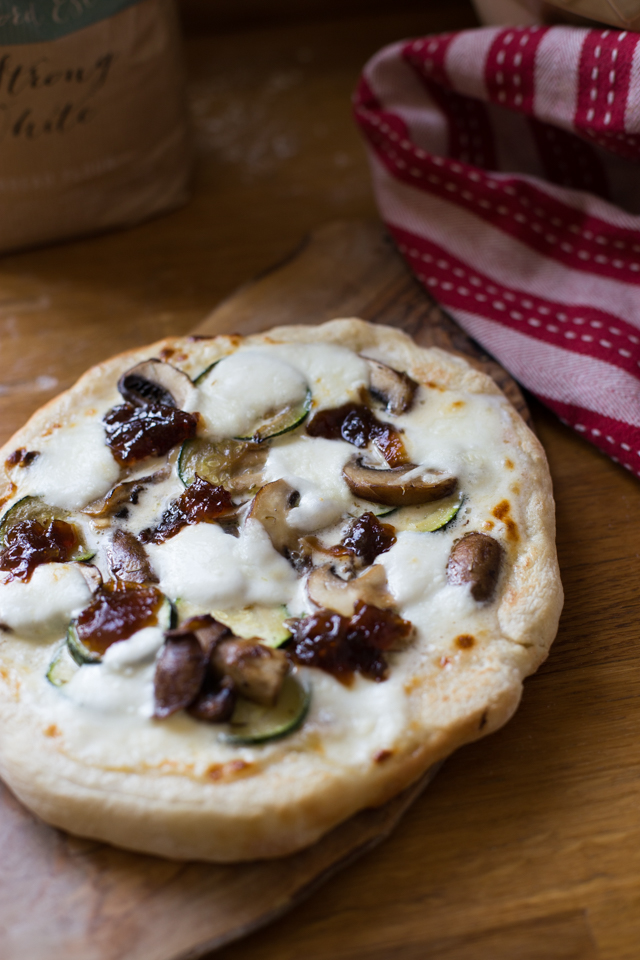 There’s something about going tomato-free that takes the whole pizza experience up a notch, if you ask me.

Don’t get me wrong, I love a regular, tomato-sauce covered pizza any day of the week, but once in a while the indulgence of an extra-cheesy, dairy-laden ‘white pizza’ (in Italian, ‘pizza bianca’) is a treat that can’t be beaten.

I’d not tried one until a couple of years or so ago, and it was a total revelation. Creamy and rich, and comforting in all the ways a traditional spaghetti carbonara is but with the added bonus of a light, fluffy bread base. What could be better? 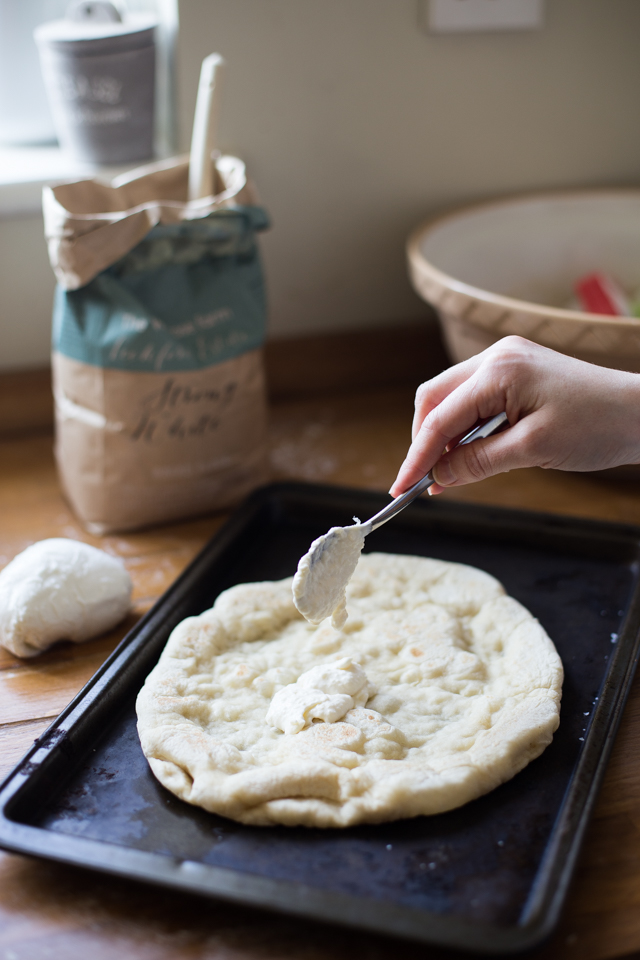 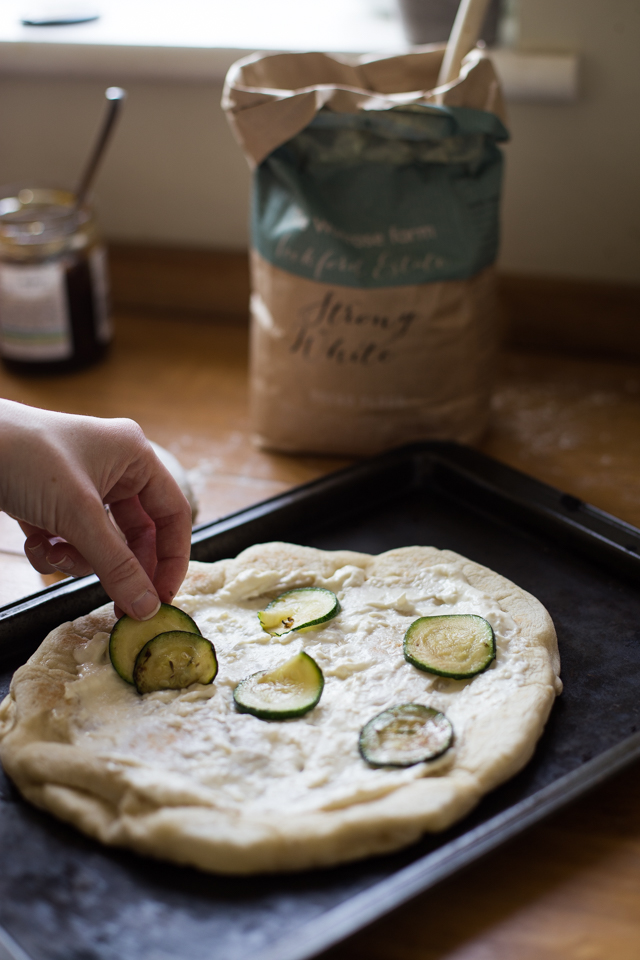 This recipe is a riff on the pizza recipe I named, maybe in a fit of arrogance (that I still totally stand by…), ‘the very best homemade pizza!’

The dough gets a long prove and is stretched out into rounds by hand, before being part cooked in a searing hot frying pan to create lightness before being finished off in the oven.

The beauty of the recipe also means that you can pre-prepare the pizzas- cooking the bases in a pan and topping them once cooled will let you put together a whole stack of pizzas that can then be stored in the fridge, and cooked whenever you fancy! 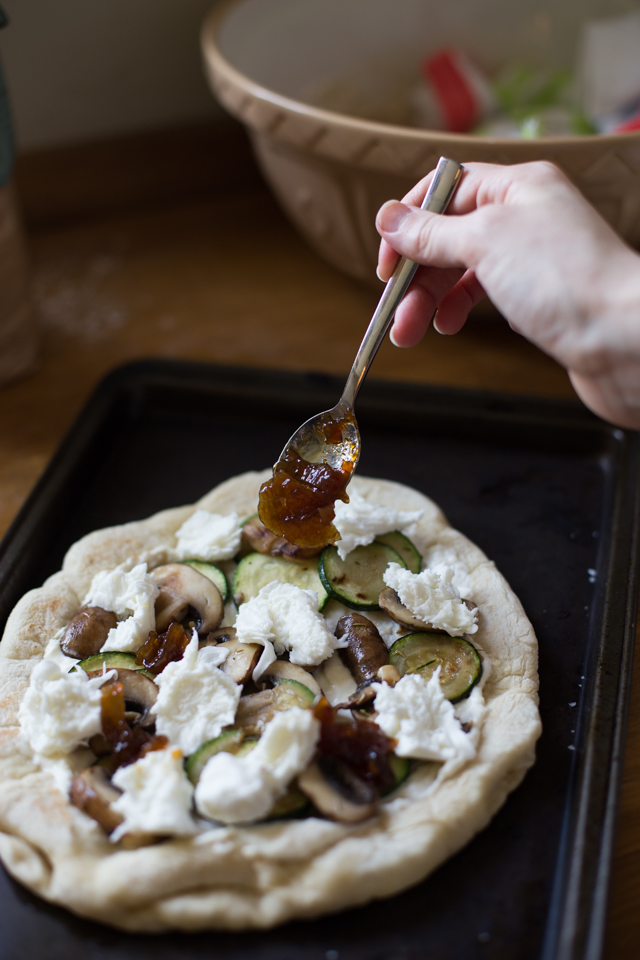 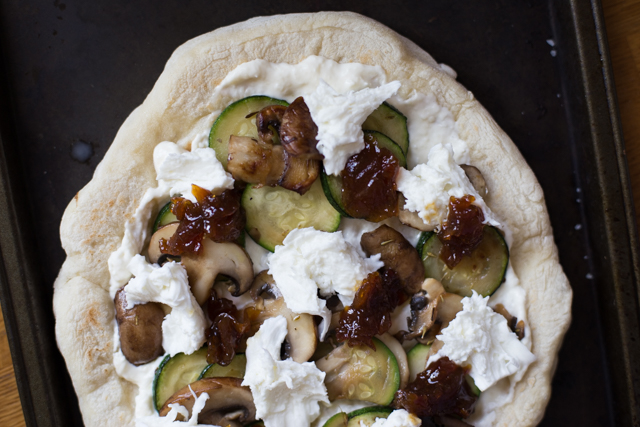 Enough about bases, let’s talk a little about toppings before we move on to the recipe itself.

We’re topping the pizza with a mixture of grated parmesan and creme fraiche, and a handful of sweet courgettes and buttery mushrooms. Shredded buffalo mozzarella ups the cheese stakes, and a few spoonfuls of tangy onion chutney finishes the job.

I made this particular batch of pizzas the Friday before last, and left one prepared for Jason to cook for his dinner that evening, since I was heading out to London for the night.

He told me later it’s the best pizza I’ve ever made him. And that, ladies and gents, is saying something. 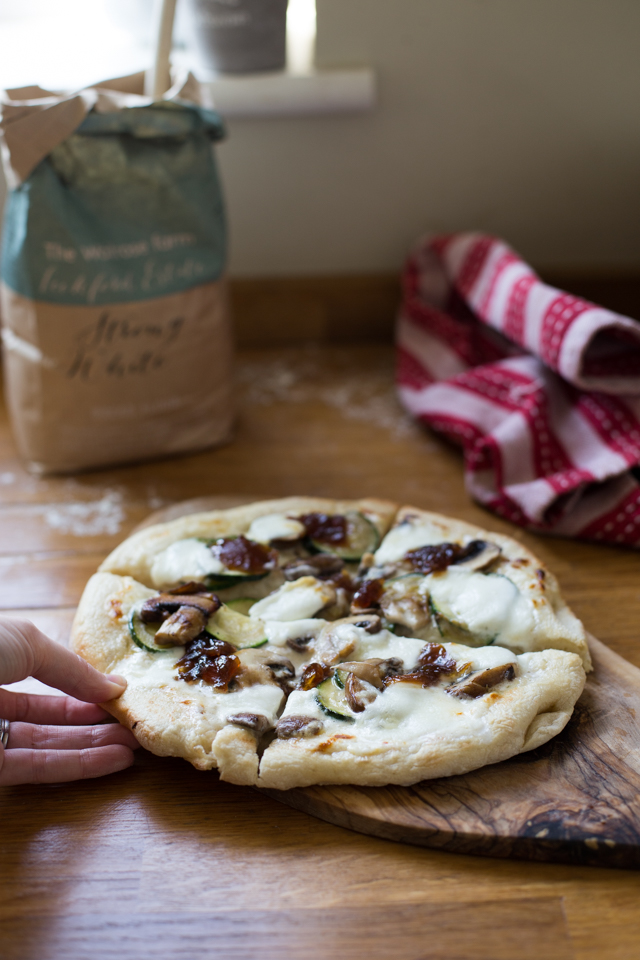 The dough recipe linked below makes enough for 4 pizzas, whilst the toppings are enough for 2. You can either double the topping quantities, or pop different toppings on the other two pizzas, or I often like to make a little bread loaf with the leftover dough. The possibilities are endless!

- Prepare the bread dough according to instructions listed in my recipe for ‘the best homemade pizza‘, stopping once the bases have been cooked off in a frying pan and transferred to baking trays.  Whilst the bases are still hot, rub each one over with the cut side of a clove of garlic.

- Finely slice the courgettes and mushrooms, and cook until soft in a little butter and garlic oil, along with a pinch each of dried thyme and sea salt.Transfer to a sieve once cooked through, and when the vegetables are cool enough to handle, carefully squeeze as much of the excess liquid out as possible, to prevent the pizzas getting watery whilst cooking.

- Top each cooked base with a couple of spoonfuls of the creme fraiche and parmesan mixture, and spread to a thin layer. Layer on a few rounds of courgette and slices of mushrooms, then half a ball of shredded mozzarella to each pizza.

- Finally, dot on some tiny spoonfuls of caremelised onion chutney, before transferring the pizzas to an oven preheated to 220 degrees celsius to cook for around 7 minutes, or until the mozzarella has melted. 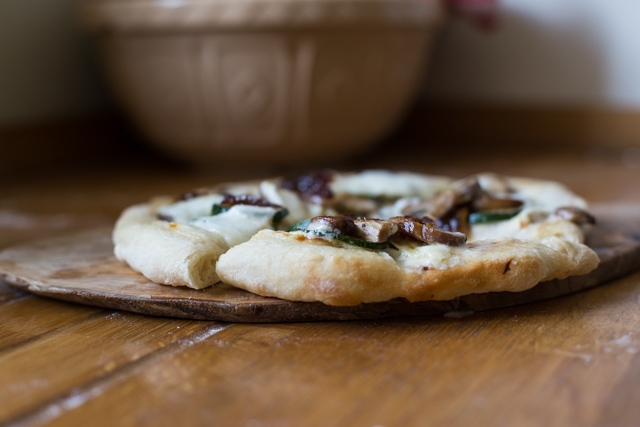 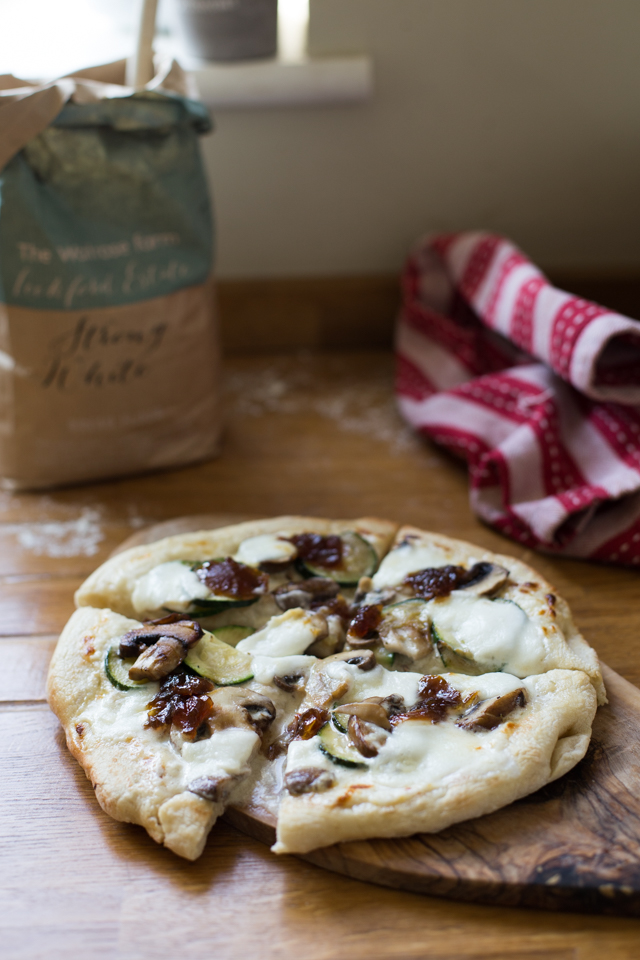 Don’t be put off by the idea of making the bases- it really is so simple, and *so* incredibly satifisying! I hope you love the recipe as much as we do…

18 Comments
Posted in FROM MY HOME TO YOURS, RECIPE, SAVOURY
Read from the beginning >