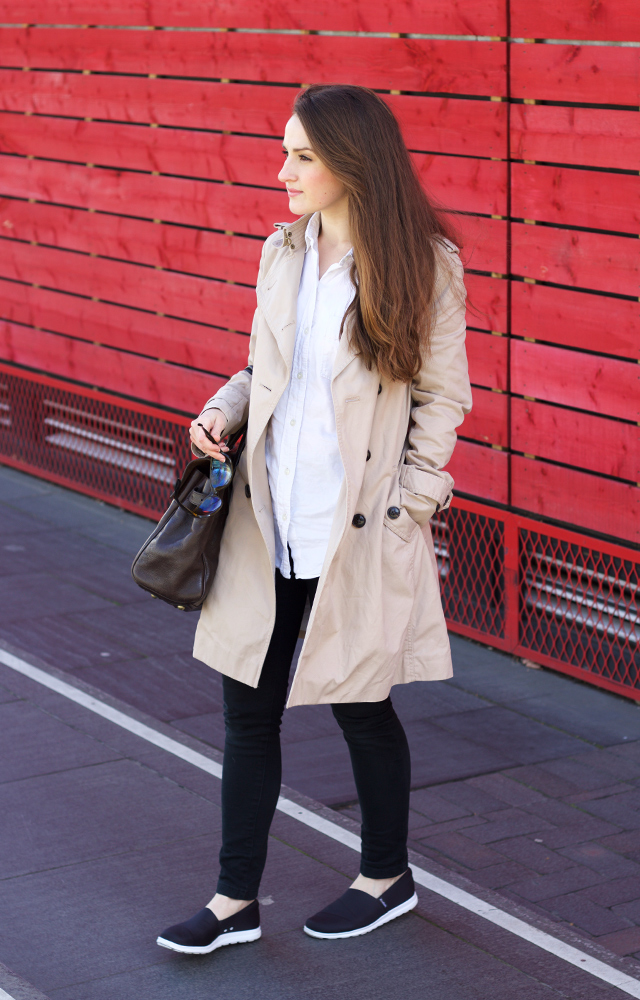 What better way to punctuate an errand-filled day, and to wrap up a rather beautiful, sunshine-filled week, than by having a burger date with friends?

I’m telling you, it felt like spring had well and truly arrived in London on Friday. We woke up to blue skies, and bright light streaming through the bedroom curtains. The sun had the merest hint of warmth to it, for the first time in so many months! I had a little wait for my train on my way into town so spent 10 minutes sat at on the station platform basking in a patch of sunlight, and found myself hoping that my train might be a couple of minutes delayed, just so I could enjoy the warmth on my face a little longer. It was total heaven.

Tania, Freya and I made plans to meet at Byron on The Cut (off the back of Waterloo station) at midday, to catch Freya on her lunch break. That branch of Byron has become something of a staple hangout for us, and I’m not too sure how. I think it’s been a case of ‘right place, right time’ as it’s just happened to be on our path back to the station during one or two evenings out in town over the past couple of years- I’m think especially of the time we drank cocktails in Topolski’s so potent we found ourselves on a mad hunt for carbs at gone 10.30, and everywhere else we tried was shut. It was a carb-crisis, okay? ;)

The burgers at Byron aren’t by any means the best you can find in London (tasty, but missing the je ne sais quoi that the likes of Patty & Bun burgers have by the bucketload)…but the Oreo milkshakes? Now those really are something else. As far as I can see, they’re made basically by just blending Oreos with vanilla ice-cream and milk. As dreamy as you’d imagine. We ordered one for Tania before she’d even arrived, because true friends know each other’s milkshakes orders ;) 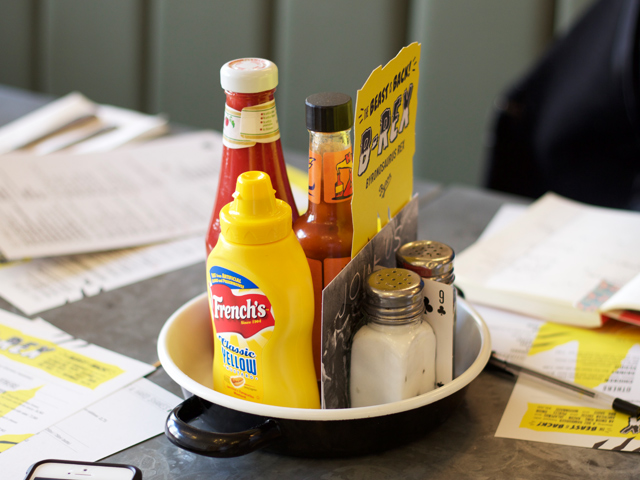 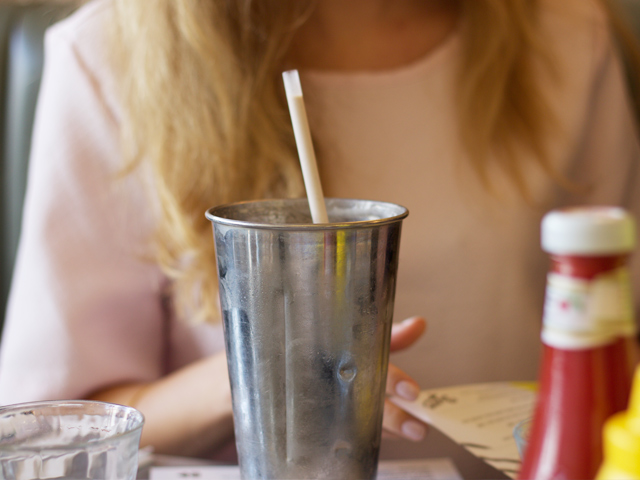 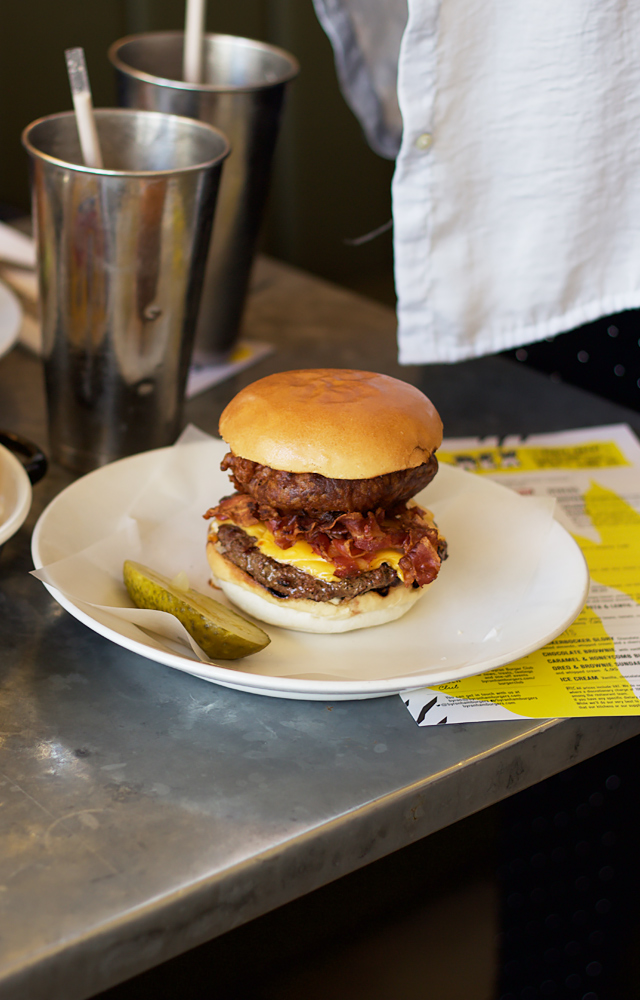 ^^ Uhh…I over-ordered. My eyes were bigger than my stomach. Though does that saying still count if you eat it all? I did leave *some* of the bun though, so whatever…^^

I went for the B-Rex- a towering monstrosity of a burger made up of a beef patty (so steak-y and tasty!), melted cheese, BBQ sauce and mayo, bacon, an onion ring, pickles, and jalapeño chilis. For the sake of dignity-when-consuming I had to take out the onion ring before eating, but yep. Ate the lot. For LUNCH. And since it’s now a few days later, I can tell you I didn’t feel hungry again for about 48 hours afterwards…a job well done, I’d say! ;) 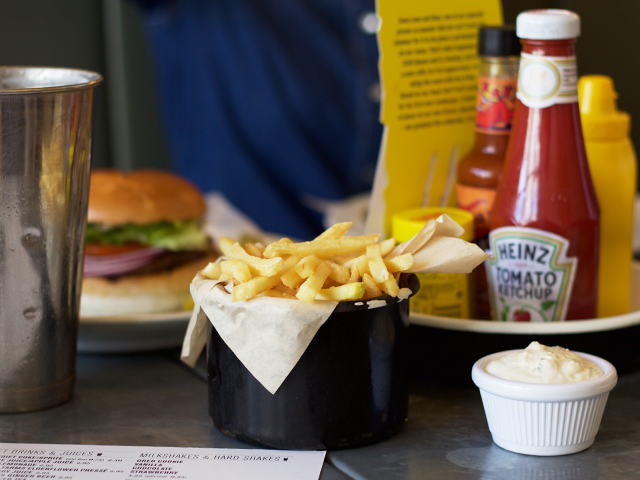 ^^ A token portion of fries for the table, plus blue cheese dip of course! ^^ 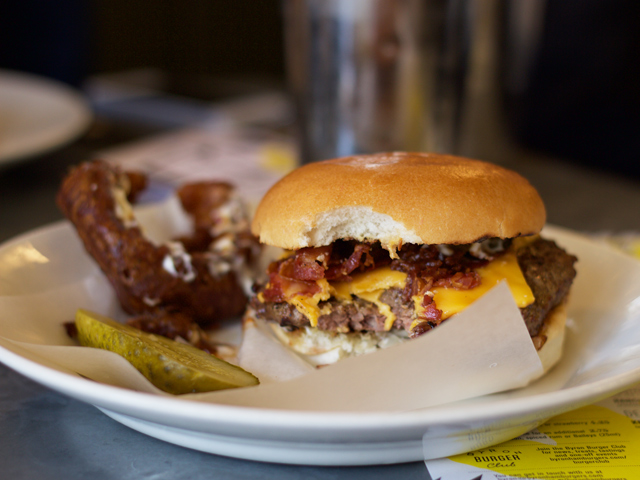 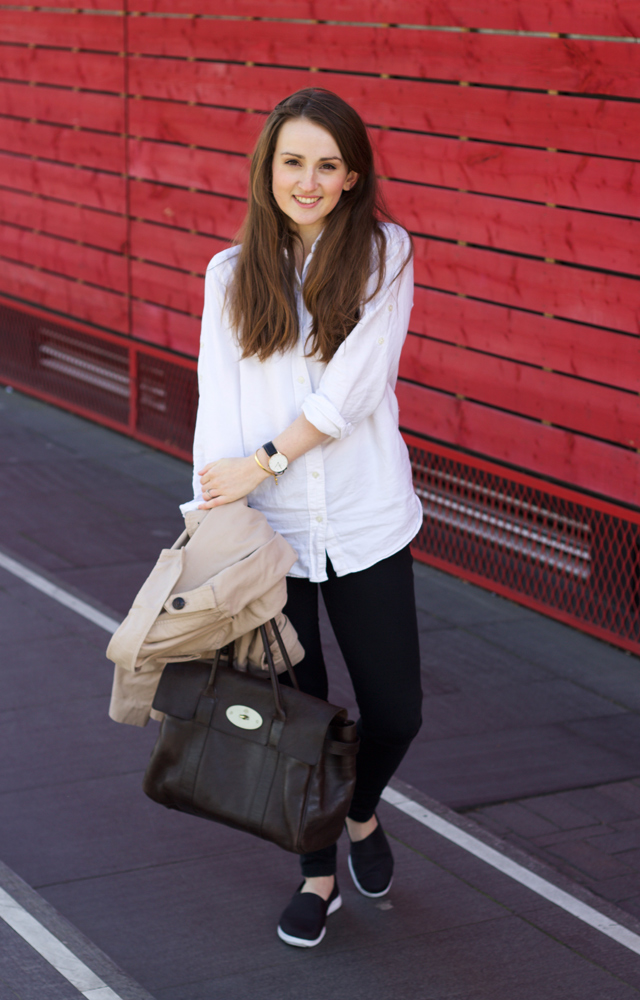 Once we’d finished our meal, and chit chatted about everything from the best beauty salons in London to where we should head for Tan’s birthday this week, we kissed Miss Freya goodbye (she was heading back to the office), and Tania and I moseyed over to the South Bank for a coffee and a wander. I’m going to omit the part where we stopped by Konditor & Cook to buy a brownie each, alright? It’s struck from the record. Never happened…

The South Bank had this amazing feel to it on Friday afternoon, full of people out making the most of the sunshine and taking photographs of the Houses of Parliament and the light on the river and all those other things that make for great Instagram snaps in London. The below photo, of two red balloons tied to a child’s pushchair, was my favourite from the day. And actually, maybe my favourite photo from this year so far! 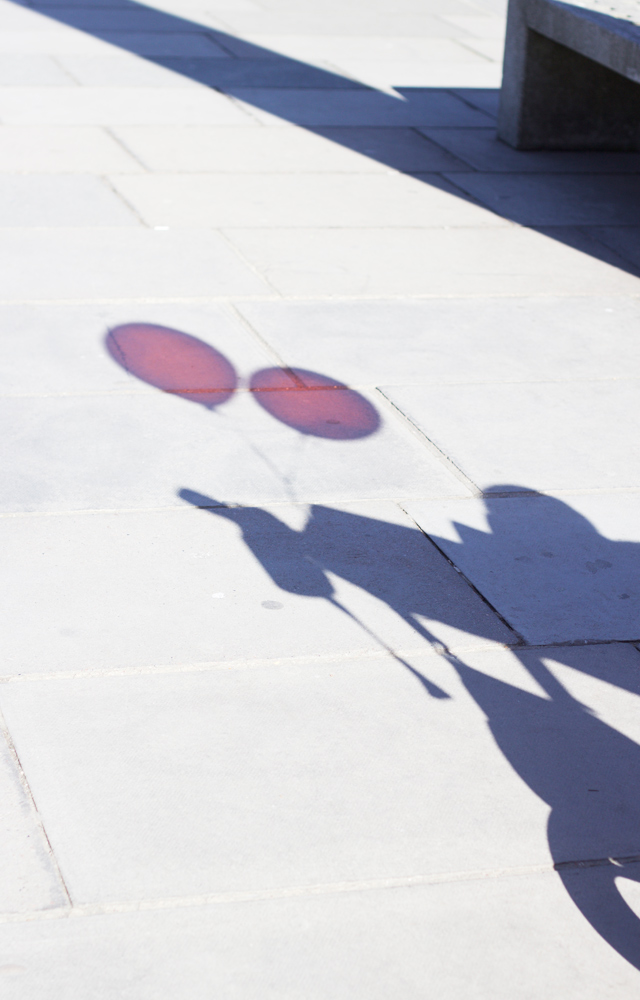 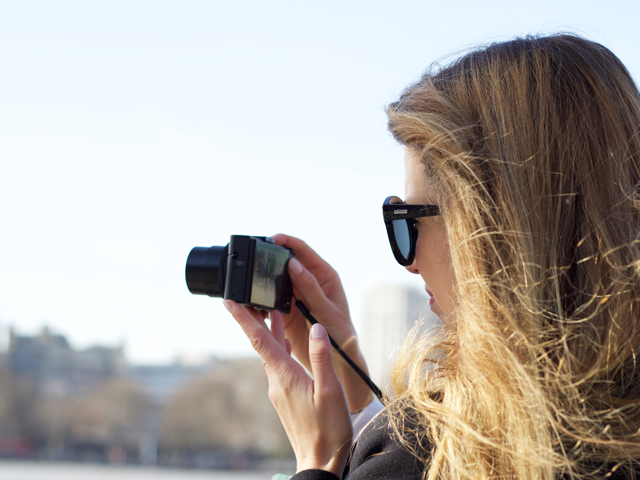 ^^ Having shutterbug friends is the greatest, especially ones who not only don’t mind, but actively encourage you to not feel embarrassed about talking to your camera whilst recording video snippets for vlogs! Those kind of friends are the best of the best :) ^^ 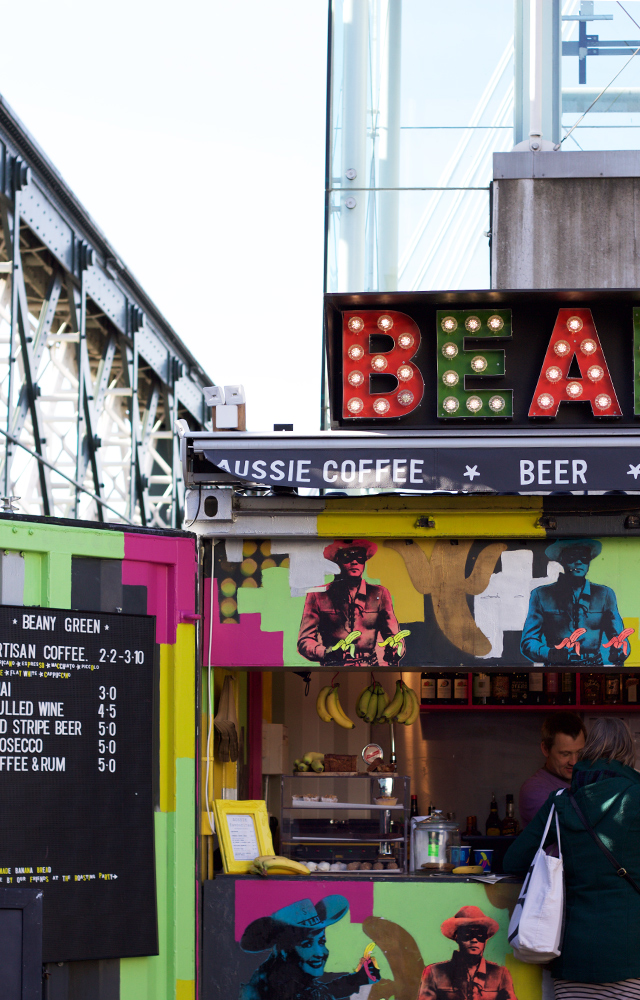 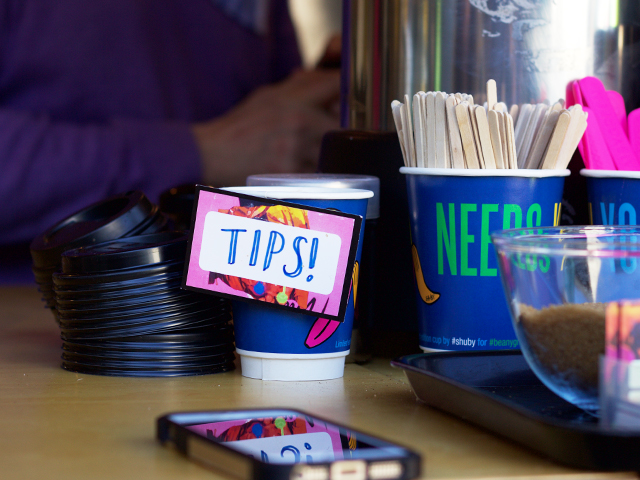 Our last pitstop was to Beany Green, a freestanding coffee shop that sits just beneath the Golden Jubilee bridges (outside the SouthBank centre). It serves the most dreamy Australian coffee, so we ordered a couple of flat whites and drank them sitting right underneath the steps of the bridge at a little makeshift bar made out of crates. The coffee was exactly what we needed after such a heavy lunch- strong and not too milky- and helped fix the mid-afternoon slump that hits me every day without fail.

We walked back to Waterloo once we’d finished our coffees, and then spent ten minutes buying bath bombs from Lush in the corner of the station before jumping on to our respective trains home.

It was a totally heavenly way to end the week, and if spring continues on the way it’s begun? Well, I’d be pretty happy with that.