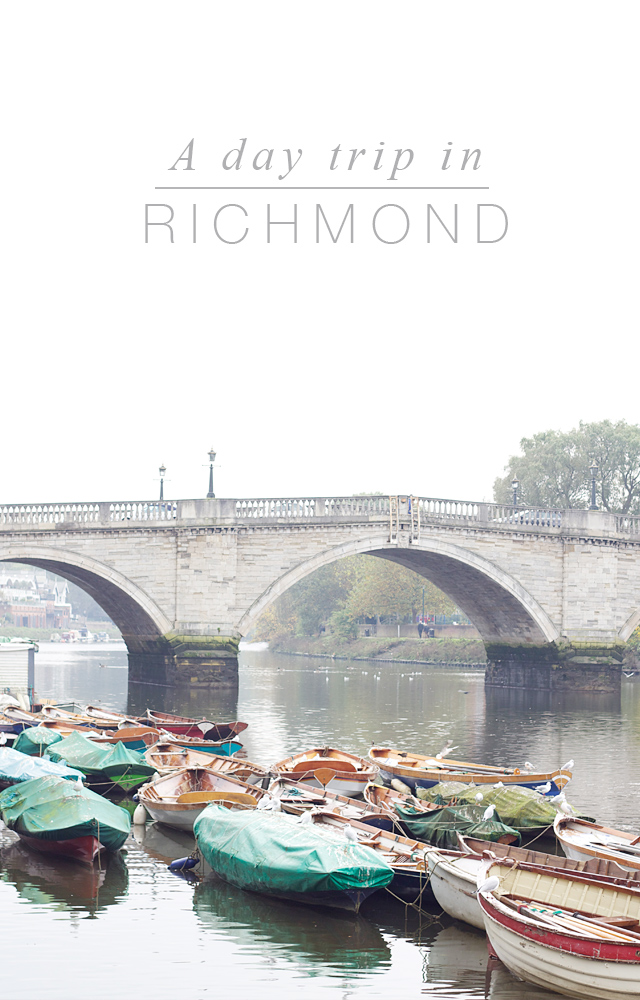 I decided on Wednesday morning that it’d been far too long since I’d had a trip to Richmond. The last time we went was back in summer when we visited with friends.  I made a quick phone call to my little sister to see if she fancied coming along approximately 30 seconds after the ‘I fancy a trip to Richmond’ thought had crossed my mind, and she did! So Thursday morning we left early(ish), and were in town by 11am.

Richmond at the weekend is lovely, but during the week, it’s magic. It sort of feels like a village instead of a city- quiet and peaceful, but with the added bonus of being able to stop by an Anthropologie whenever you fancy…and I always fancy a trip to Anthropologie.

The main aim of the day was to find a great slice of cake. I had every intention of seeking out some sweet and charming independent cafe I’d never visited before, but then we walked past Hummingbird and…you can guess what happened. I just can never turn down their cream cheese frosting- it calls out my name as I walk past the shop, and before you know it, I’m at the counter! Plus they make an excellent flat white too, which is always a clincher for me. 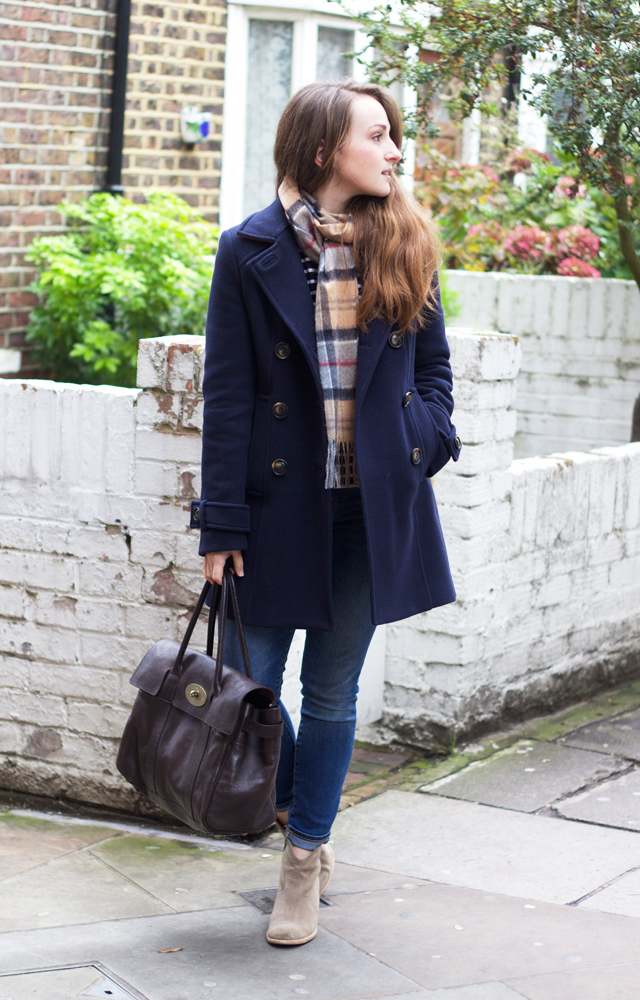 What I wore :: Ledbury pea coat (on sale right now, too!) || Breton top || Tartan scarf || Jeans || Boots || Bag  (And whilst we’re on the topic, can we just take a minute to note that those are the shortest length jeans that Gap sell, and I still have to cuff them to be able to wear them with boots? Le sigh.) 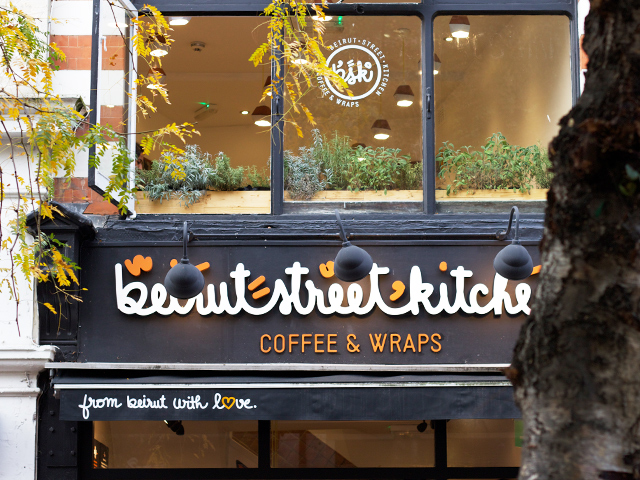 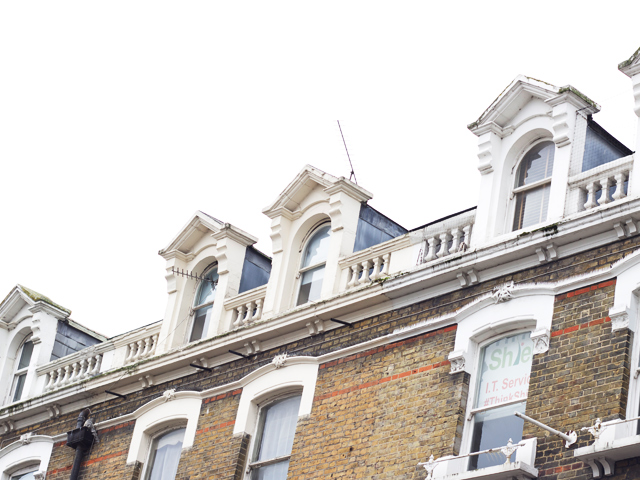 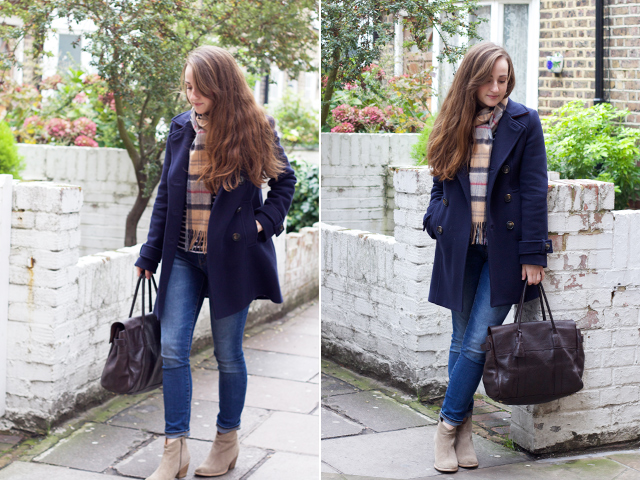 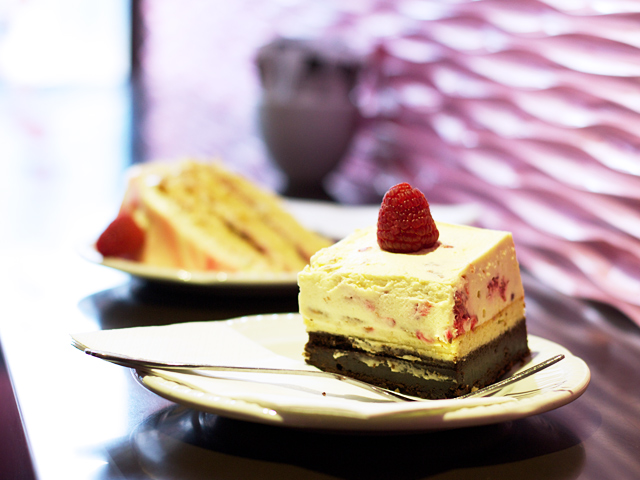 Let’s talk for a minute about cake. I’ve sampled a good variety of the Hummingbird menu, and now it’s high time we got serious about the whole cake-eating business. The three layered cheesecake brownies are good. Really good. The brownie is dense and fudgey, and so amazing paired with the light raspberry-flecked whipped cream on top. The layer cakes are for those of us who like a 3:1 frosting to cake ratio. I ate a slice of the lemon and raspberry ripple cake during last week’s visit so large and so heavily frosted it was almost vulgar, and even though I’m a huge fan of cream cheese frosting (especially lemon cream cheese frosting!) it was a bit much even for me. (I did soldier on and eat the whole slice, mind you. Because I’m a trooper like that, and dedicated to my cause.)

The cupcakes really are where it’s at with Hummingbird, if you ask me. There’s always just the right amount of frosting, they’re generously sized but not so big they become sickly, and the flavours are the best. I highly recommend the S’mores flavour (it’s limited edition though, so you’ll have to hurry!), the carrot cake, and of course (of COURSE!) the red velvet! And like I said, their flat white is the bomb (so strong it’s like being punched in the face with a bag of coffee beans). 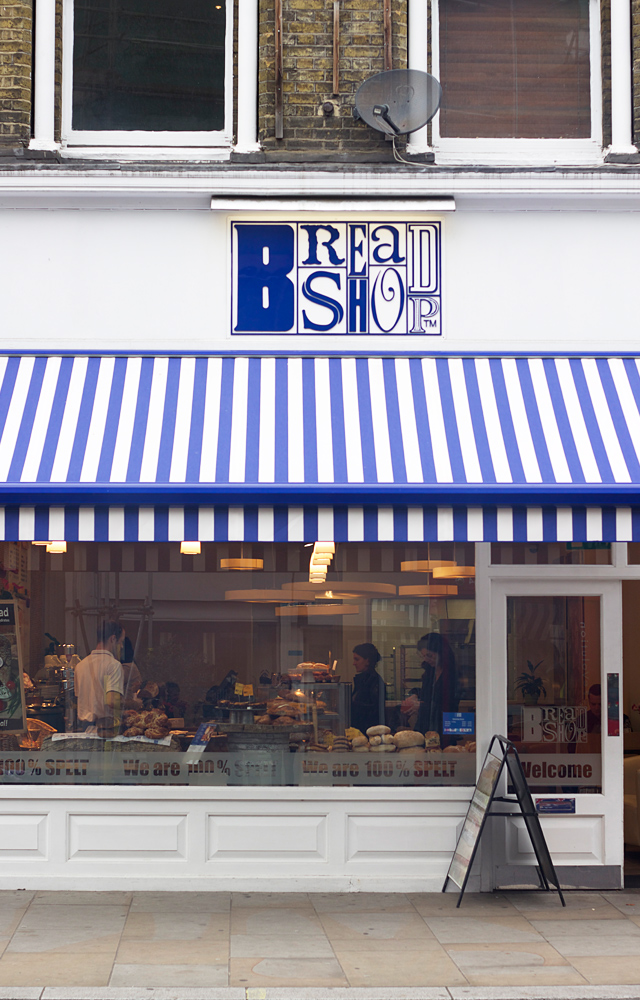 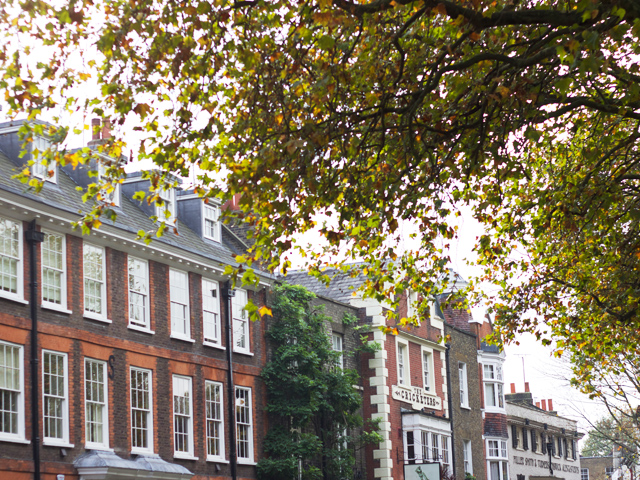 To work off our post-cake stupor, Cesca and I moseyed on down to the river for a walk. Spending time with my sister seems to get more and more special as the years go on. Because of the huge age gap between us (seven years and 364 days!), it’s always felt like we’ve been in two separate worlds. As we’re getting older though, the gap is closing faster and faster. I can’t quite believe that she’s off to college next year, and is not that far off being able to learn to drive. It feels so very recent that I was at that exact same point in my life- panicking over GCSE coursework deadlines, taking my first day of A-level classes (where, fun fact, I was actually taught English Lit by my very own Mum! :), spending the ‘rights of passage’ summer between school and college performing in a production of Oliver and falling for a guy who wound up being my very first boyfriend.

It’s so exciting listening to Francesca tell me all her plans and dreams (she has such big plans!), and to think about how very different we are. Whereas my talents lean more towards the creative and artistic, my sister is as logic-based as they come. She started explaining something about ‘circle theorems’ (or something like that, I don’t even know) over coffee on Thursday, and I’ll be honest, I’d zoned out and was thinking about what lovely light there was and how it was making for easy photo-taking at the first mention of the word ‘denominator’ ;) 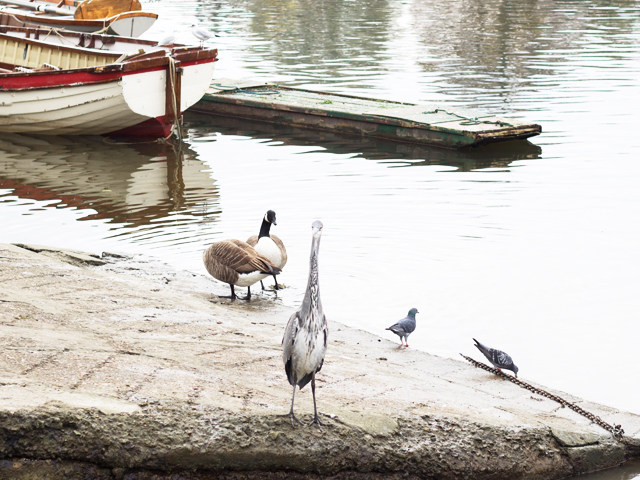 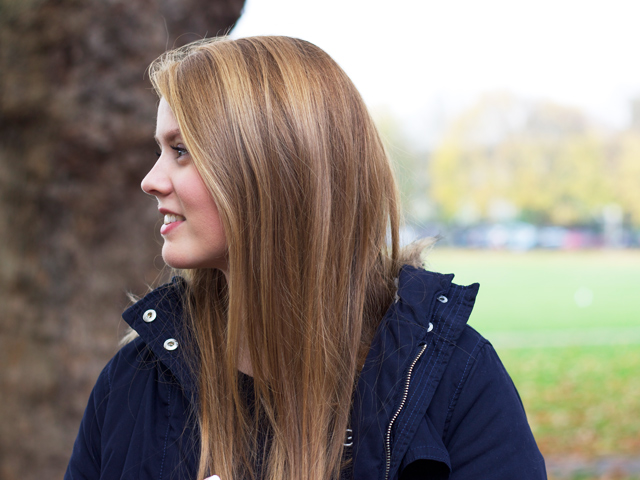 ^^ My sister is basically Rapunzel in a navy blue parka. Isn’t her hair so beautiful? The photo doesn’t even do it justice! ^^ 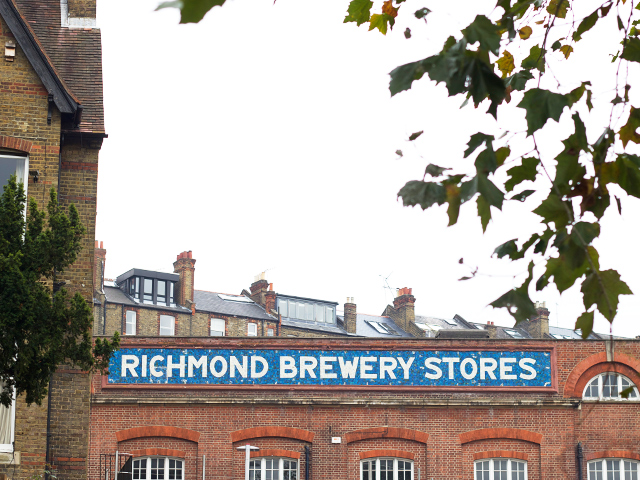 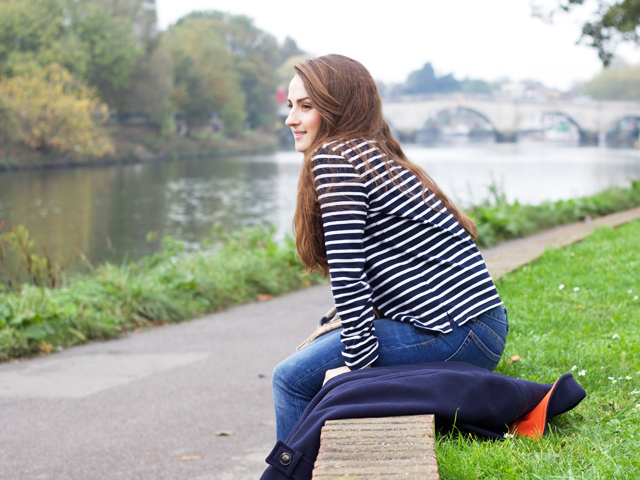 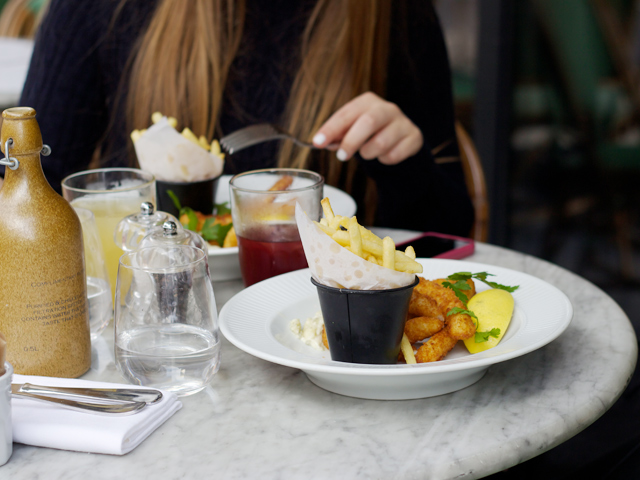 For lunch, we decided to stop by Cote- partly because the sweet green cafe chairs were too charming to pass up, but mainly because the french fries are the BOMB. We both ordered the cod goujons with fries- little sis ate hers with ketchup, I polished off one and a half portions of tartare sauce, and all was well in the world. Oh, and we made the most of the mild-ish weather and ate outside for what was probably (almost certainly!) the last time this year. Autumn al-fresco dining is where it’s at! 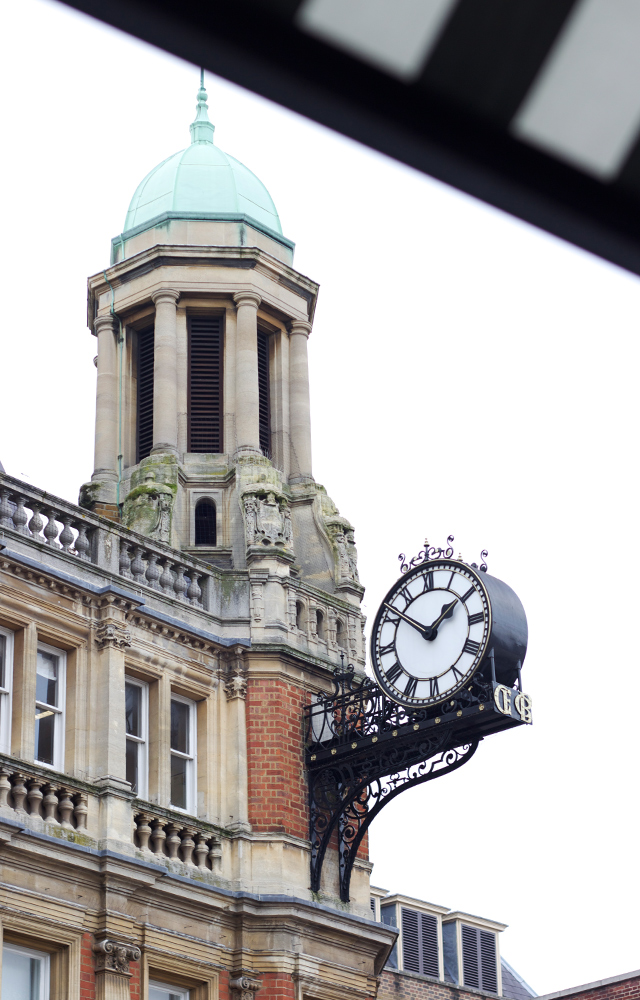 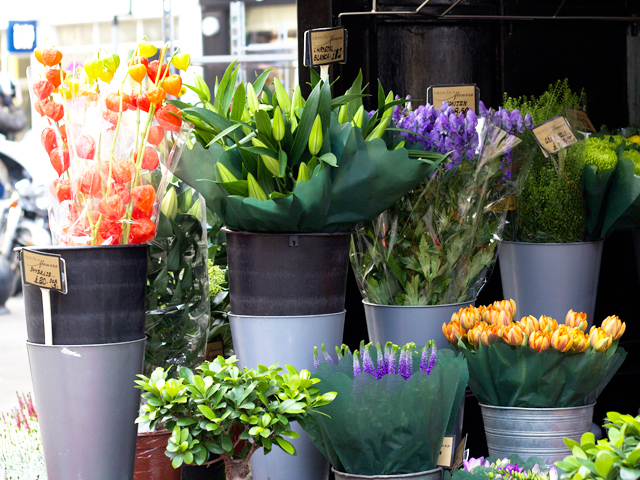 And after a quick pit stop back to the bakery to pick up cakes for Jason, and an eye-wateringly huge payment was made at the NCP pay station (I can’t even begin to tell you how much it was. It’s too painful a memory.) we were home! The drive back down the motorway was beautiful- we drove right into the sunset, and the whole time I kept shouting over the radio to Cesca about how I’d forgotten what winter light looked like and how much I love the half hour right before sunset for taking photos. And, in much the same way as I did when she talked to me about trigonometry and circle theorems, Cesca tuned me right on out ;) And such is the magic of the sibling relationship! <3