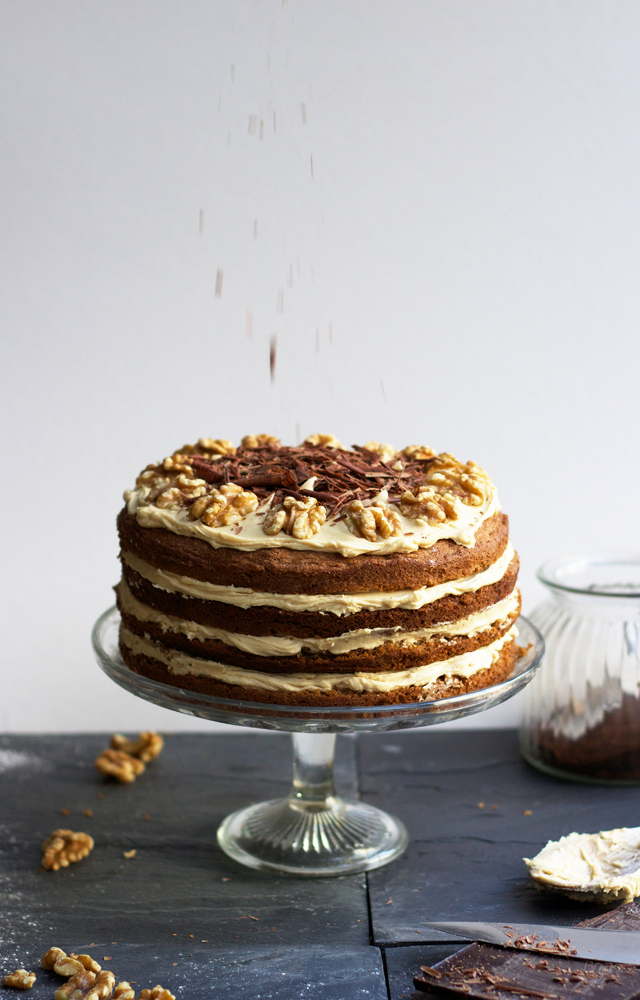 Today’s is my sweet fiancé’s 27th birthday! Jason’s one and only birthday as a ‘fiancé’ no less, and his last before he becomes a husband! 27 is set to be a big year ;) To celebrate, we’re taking the day off and heading out into the countryside for a jolly, and then going for dinner in the evening at his family home. Expect photos, because that’s just how this works, right? ;)

This year, Jason requested coffee and walnut cake, please and thank you. We toyed briefly with the idea of doing Jamie’s chocolate cake, with that amazing looking nougat frosting and the chocolate crispy layers. Carrot cake was mentioned, too. As was good old Victoria sponge. We even discussed a Devil’s Food…before remembering that we always find chocolate cake deeply unsatisying. Eventually though, coffee and walnut cake (that stalwart of the country fair bake sale stand) was settled upon. I actually made this cake last year for Jason’s birthday, but have done a little tweaking with the recipe to take it up a notch or two since then! Mainly by ramping up the coffee flavour in the frosting by using fresh espresso instead of powder (never enough coffee for us!), and slicing up the layers to make this cake a four tier-er.

Making Jason’s birthday cake each year is one of my favourite annual traditions. I like to think that in years to come, I’ll look back on all the years and years of cakes that’ve been made in various different kitchens, and feel fondly nostalgic…even more so than I do normally! But even aside from all this silly sentimentality, this cake’s set to be a tasty one! We’ve yet to cut into it (as much as I’m dedicated to the art of photography and food styling, there’s nothing that’ll make me cut into someone else’s birthday cake merely for the sake of a great photo ;) but liberal amounts of both the batter and frosting were consumed yesterday, and I can confirm that it’s a good’un. (Maybe my lunch yesterday consisted of cake batter and frosting with a token Nakd bar thrown in for ‘health’. Maybe I sat on the living room floor eating frosting off the spatula yesterday afternoon, looking dejectedly at the post-photoshoot mess around me and wondering how to get away with not clearing it up Maybe not. There’s just no way of knowing.)

So, to the recipe! 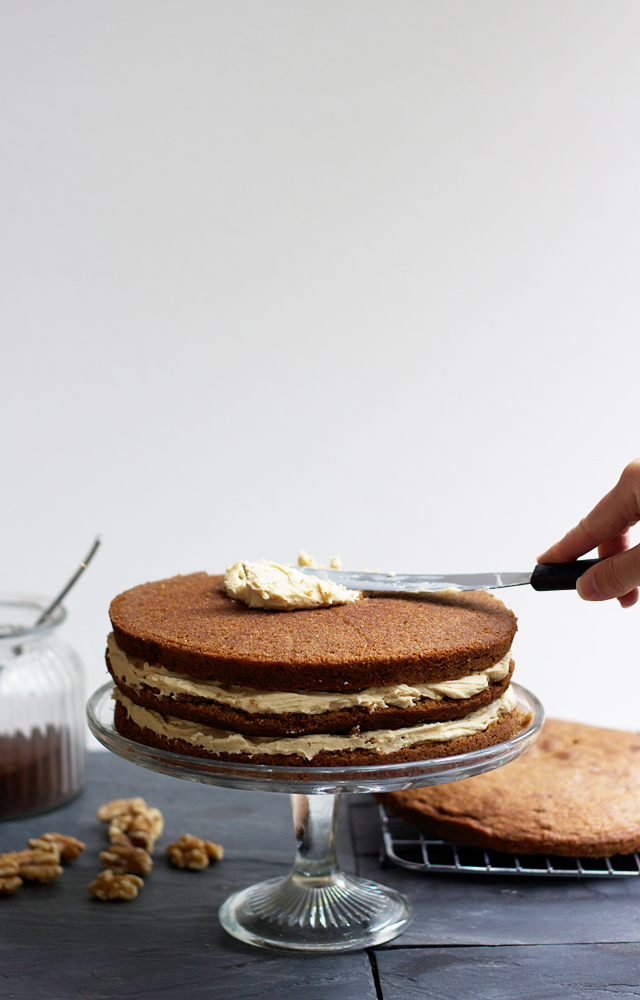 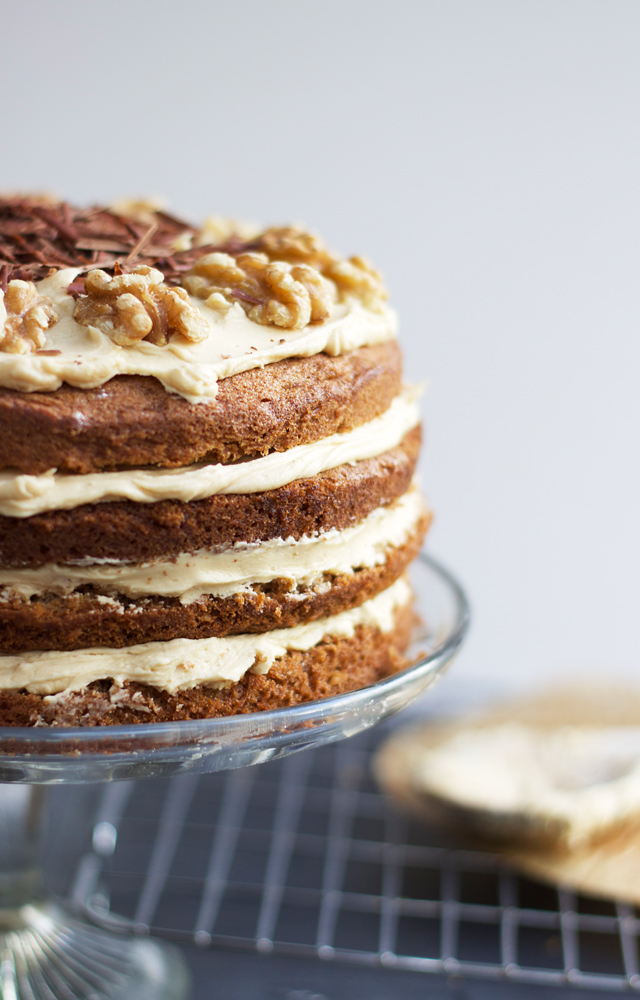 The recipe is adapted (barely, because it’s pretty perfect as it is) from Nigella’s coffee + walnut cake recipe in ‘Kitchen’. Serves about fifty million people (look at the size of it!).

- Preheat the oven to 180 degrees celsius, then butter two sandwich tins and line the bases with parchment paper. For the cake, begin by putting the walnuts and sugar into a food processor, and blitz until the walnuts have been broken down into a fine crumble.

- Add the sugar mixture into the bowl of a mixer, and beat together with the butter until light and fluffy. Measure out the flour, espresso powder, bicarb and baking powder into a separate bowl, and mix to combine. Whisk the eggs in a jug.

- With the mixer on low, add in the milk a tablespoon at a time, until the batter reaches a lightly whipped dropping consistency. Feel free to add in a splash more milk if the batter stills feel thick after the initial 2tbsps have been added.

- Divide between two prepared sandwich tins, carefully smooth the tops flat, then bake for between 20-25 minutes until the tops are golden brown and springy to the touch. Allow the cakes to cool for around 10 minutes in their tins, then transfer to a wire rack to cool completely. When the cake are completely cool, carefully slice them in half. I found that scoring a halfway line round the middle, then cutting bit by bit in a circle was the easiest way to do this.

- To make the frosting, put the butter and icing sugar in the bowl of a mixer, **hang a tea towel over the top of the mixer to stop the sugar going everywhere!** and then beat until the butter and sugar start to clump together.

- Put the base layer of cake on a cake stand or serving plate, and then spread with a generous amount of frosting. The frosting is a fairly stiff one and won’t spill out, so can be spread right up to the edges of the cake. Build up the cake one layer at a time, then finish with a final topping of frosting. Top with walnuts and chocolate shavings (drag a sharp knife over the back of a bar or chocolate), and serve to your favourite person on their 27th birthday :) 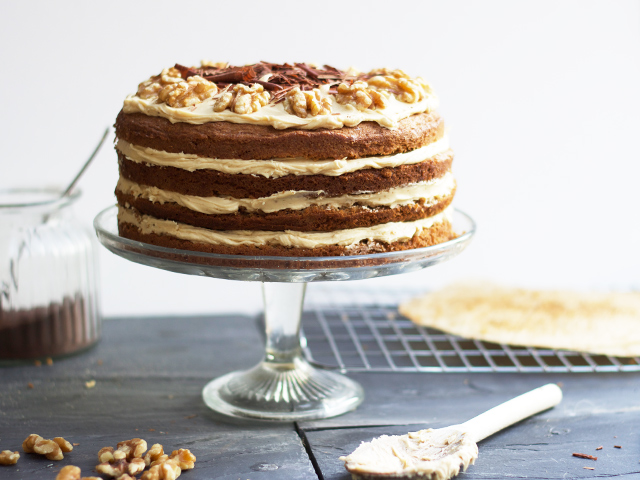 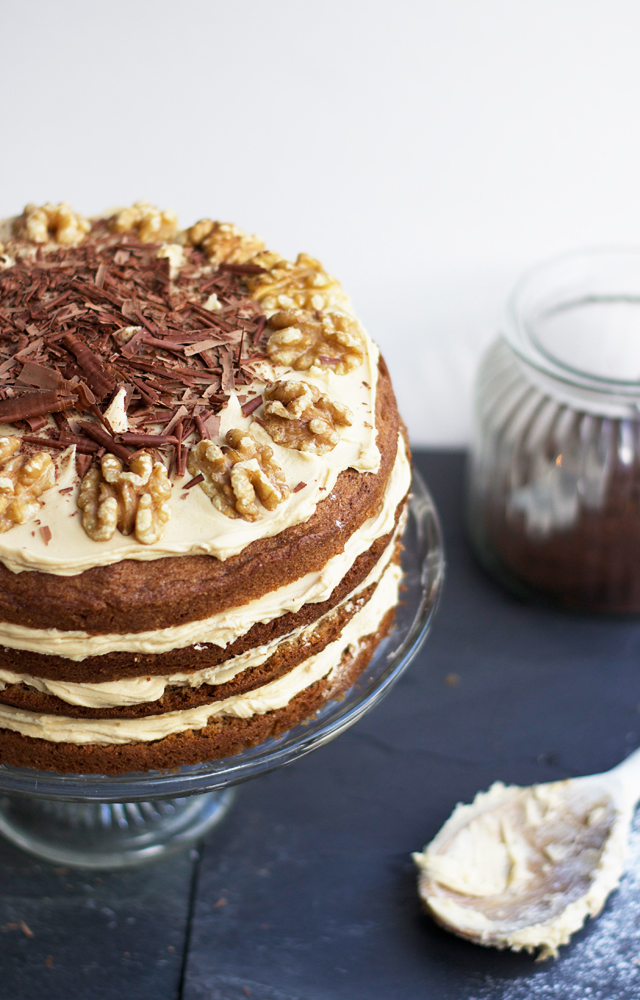