When I was about 17, I went through a phase of being totally hooked on these incredible spinach and feta filo pasties that my Mum’s lovely Bosnian friend used to make me. I could’ve eaten them all day long. Even at breakfast time! I mean, they were made of carbs, and veg, AND dairy! What’s not to love? I remember them as having the most richly savoury flavour- with salty cheese and irony spinach all wrapped up in a few layers of fine filo pastry. These pasties of mine are an homage to those ones from years ago- an English twist on traditional Mediterranean ‘spanakopita’ pastries.

We’ve been eating a fair few pasties, lately. I started off experimenting with sweet potato fillings, then moved on to cheddar cheese + potato + onion combos, and now have settled on this spinach, feta and nutmeg filling as my absolute favourite. We eat them for light weekend lunches, and fast weekday dinners, and last weekend my Mum and I wrapped up a couple and ate them in the car whilst halfway round the M25. Two words for you on that scenario : Crumbs. Everywhere.

I’ve made this recipe into a little video instead of a photo series for a change, because why on earth not! And it only took about 5 times as long as shooting a set of photos does! ;) Oh, it was a labour of love for sure! 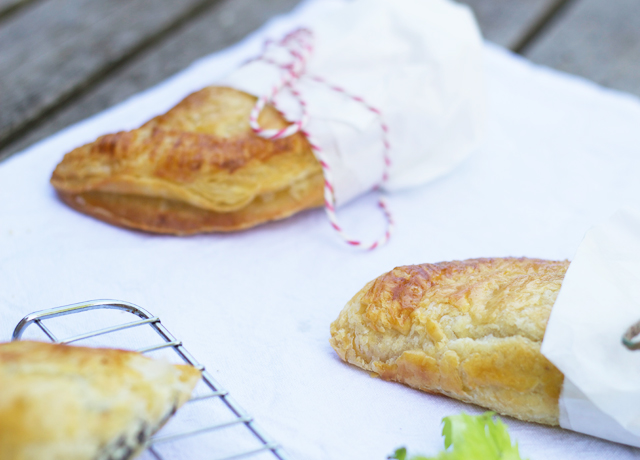 {Makes around 5 large pasties (as shown), or cut the pastry rounds smaller to make mini pasties}

- Cut the butter up into roughly 1/2 inch cubes, then add to the flour along with a pinch of salt. Place the bowl into the fridge for about 10 minutes which we get on with making the spinach (chilling the ingredients will help the pastry get really nice and flaky later on).

- Add the spinach to a frying pan along with a drizzle of olive oil, a smashed garlic clove, pinch of salt, and quarter teaspoon of ground nutmeg. Place over a low heat, & heat gently until the spinach is completely wilted.

- Drain into a sieve, and then spend a good few minutes squeezing *all* of the liquid out so that it doesn’t make the pastry go soggy later on. When it’s as dry as you can make it, spread it out onto a plate to cool.

- Take the bowl containing the butter and flour out of the fridge, and begin mixing in iced water a couple of tablespoons at a time. Keep stirring and adding in iced water (take care not to drop in any ice cubes!) and stop mixing just as soon as the dough clumps together in a rough ball. Tip it out onto a well floured surface, and press in any loose bits of dough and flour.

-  Flour your rolling pin, and begin rolling out the dough into a long rectangle. When the dough’s about a centimetre thick, take the bottom of the rectangle and fold the bottom third of the pastry over the middle third, and then take the top third of the pastry and fold it over the top of that. Rotate the dough by 90 degrees, and then repeat the rolling, folding, and turning process another 5 times.

- The dough will still have visible streaks of butter in when you’re finished, but will be smooth and coherent in texture. The streaks of butter are what will give the pastry layers of flakiness when cooked! Wrap the pastry dough in cling film, and then put in the fridge to relax for half an hour.

- Whilst the dough chills and relaxes, roughly chop the cooled spinach, and then put it into a bowl and crumble in the feta. Add in one egg yolk, and then stir to combine. Give the mixture a taste, and add in any extra seasoning (salt, pepper, lemon zest) if you feel it needs it!

- After the dough has had half an hour in the fridge, take it out and roll it until it’s about 5 millimetres thick. Cut around a small bowl (or use a smaller cutter, if you’re making mini pasties) and then place the pastry rounds onto baking sheets lined with parchment paper. I rerolled the scraps of pastry partway through cutting out the rounds, and got 5 fairly large pasties from this batch.

- Place a heaping dessert spoonful of the filling into the centre of each pasty, then brush the edge with a little beaten egg. Fold over the pastry, and use your hands to press the edges closed and to remove any air from the pasty. Crimp the edges closed with a fork, then make a small hole in the body of the pasty to let out steam. Brush the whole thing with beaten egg, sprinkle with a little salt, then put in an oven preheated to 180 degrees celsius or 350 degrees fahrenheit and cook for about 25 minutes, until the pastry is a light golden colour. Allow to cool for about 5 minutes, and then dive on in!

26 Comments
Posted in FROM MY HOME TO YOURS, RECIPE, YOUTUBE
Read from the beginning >