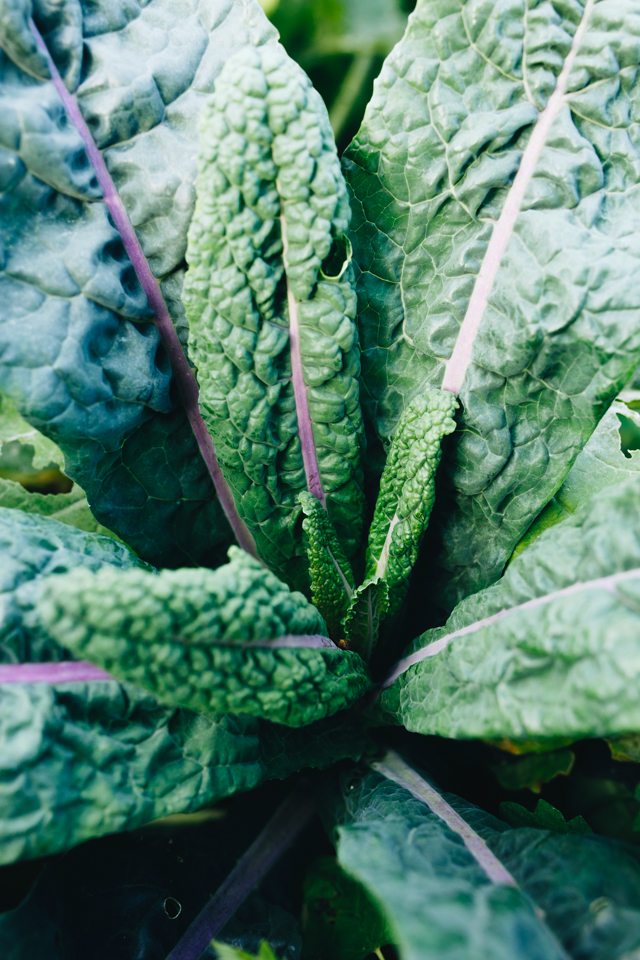 Oh September. What a month you’ve been! I feel as though I’ve barely set foot in the vegetable patch, other than quick trips down here and there to collect veg for dinner or pick kale for a smoothie on Ottie’s request (I know, so middle class ;).

What with being nine months pregnant and having a baby the size of a watermelon getting in the way of pretty much my every move, the nights drawing in so fast now we’re moving into autumn, plus work and all the last minute preparations that come the month before a baby is due, it’s become so tricky to keep on top of the gardening lately!

In fact, it’s made me feel kind of sad at times seeing the weeds growing as fast as the vegetables in amongst the neat rows I planted back in spring, slug damage galore on some of the brassicas thanks to the nettles providing such a perfect hiding place for them along the bed-edges, and caterpillars eating away unchecked at a few of the kale plants.

But I’m trying to remind myself not to fret too much, that I can only do what I can do, and that even the biggest of weeds can be pulled up come next spring! 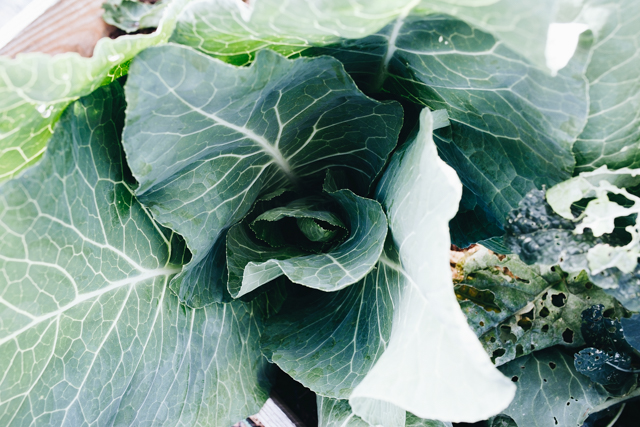 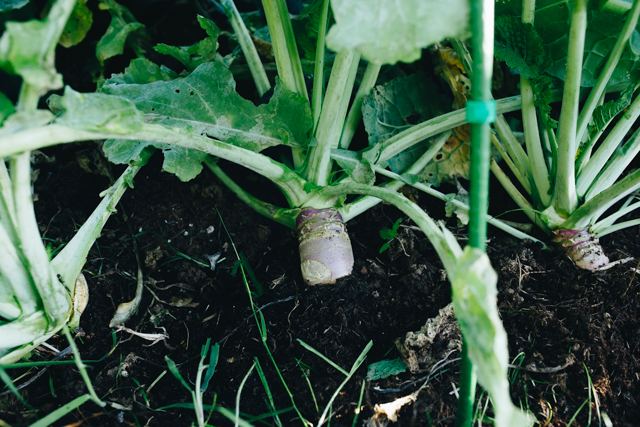 We’re moving into the season of brassicas now, and it’s so satisfying watching them grow. Most of the kales and swedes were netted until just a few weeks ago, but since they seemed to be fast outgrowing their tunnels I braved removing the netting, and for the most part they’ve been fine!

To take us into the colder months, I’m growing a few different types of brassicas- ‘Cavolo Nero’ and ‘Red Devil’ kale, ‘Filderkraut’ and ‘Savoy’ cabbages, and a variety of swede promisingly called ‘Best Of All’! I’ve found kale such a satisfying thing to grow this year- being able to nip outside and pick three or four big, iron-rich dark green leaves to go alongside my meals is amazing, and the taste is a world away from the bags of pre-chopped, dried out curly kale I used to buy from the supermarket! I’m really, really hoping it lasts the winter…

The swedes I maaaay have gone overboard on- if they all grow to full size, we’ll have a good 10 or so to harvest later in the year! And beyond carrot and swede mash, I’m not that sure what I’ll do with them…answers on a postcard please! 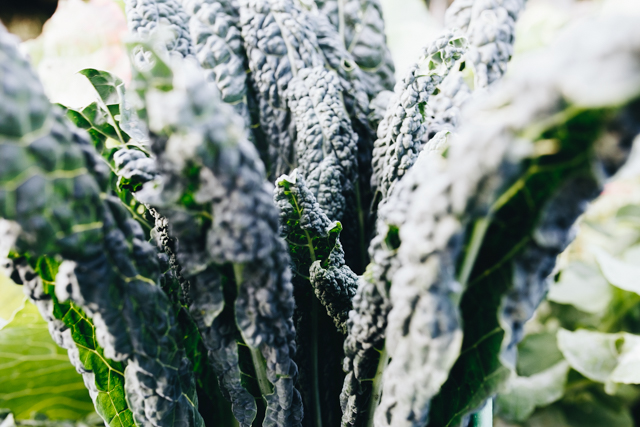 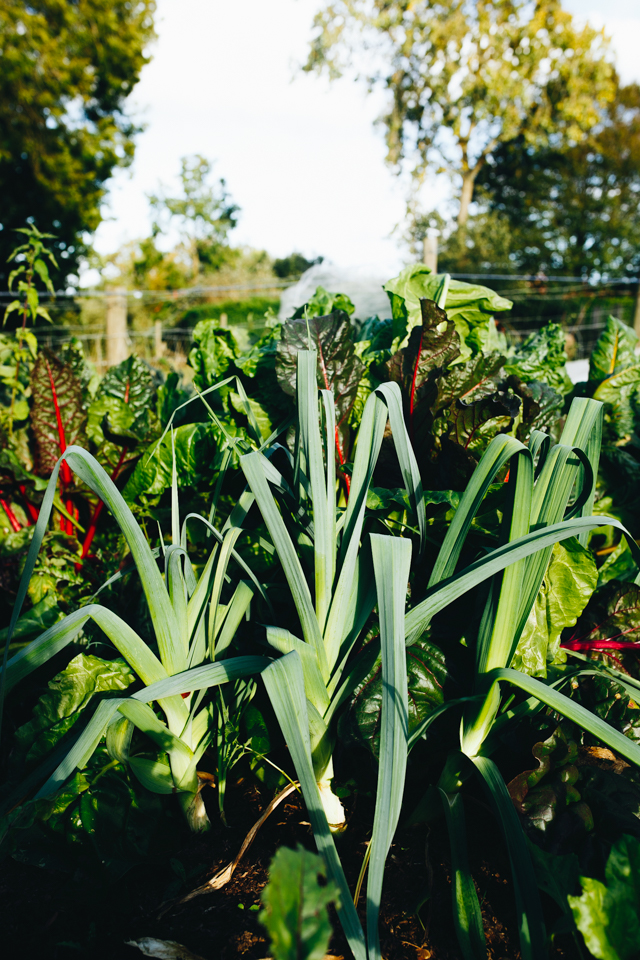 The promise of leeks to come…

I can’t say that our leek harvest will be particularly large, but it will be exciting nonetheless! We’ve maybe got 8-10 leeks that have made the grade- next year I’ll know to sow 10x as many, and also that they like a lot of water during hot weather to keep them from frazzling!

Still, I grew them and they’ll be delicious just for that fact alone I’m sure. I’m thinking of cooking them into some sort of gratin with potatoes and a creamy sauce, which is making my mouth water just thinking about it… 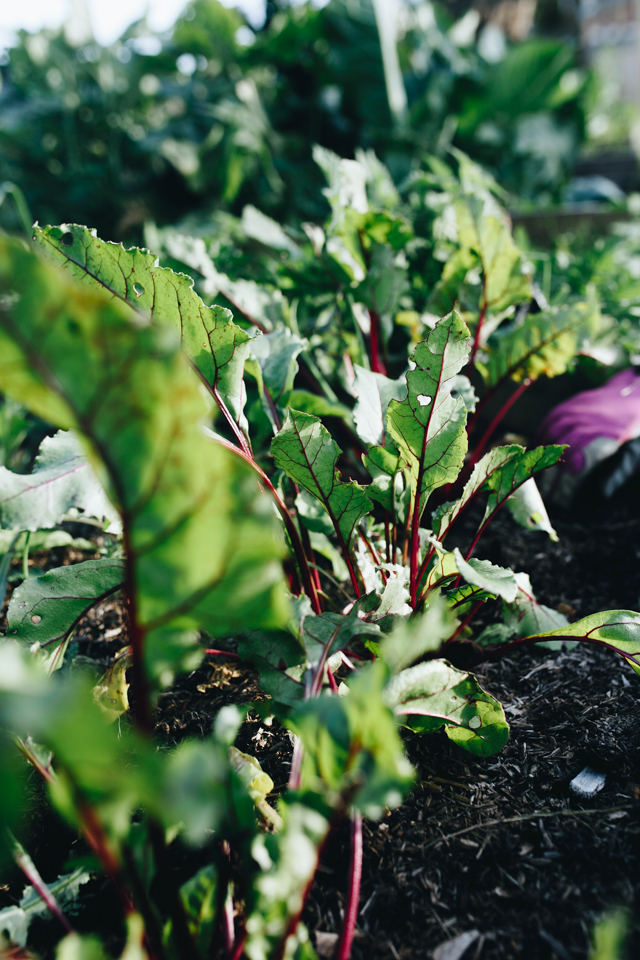 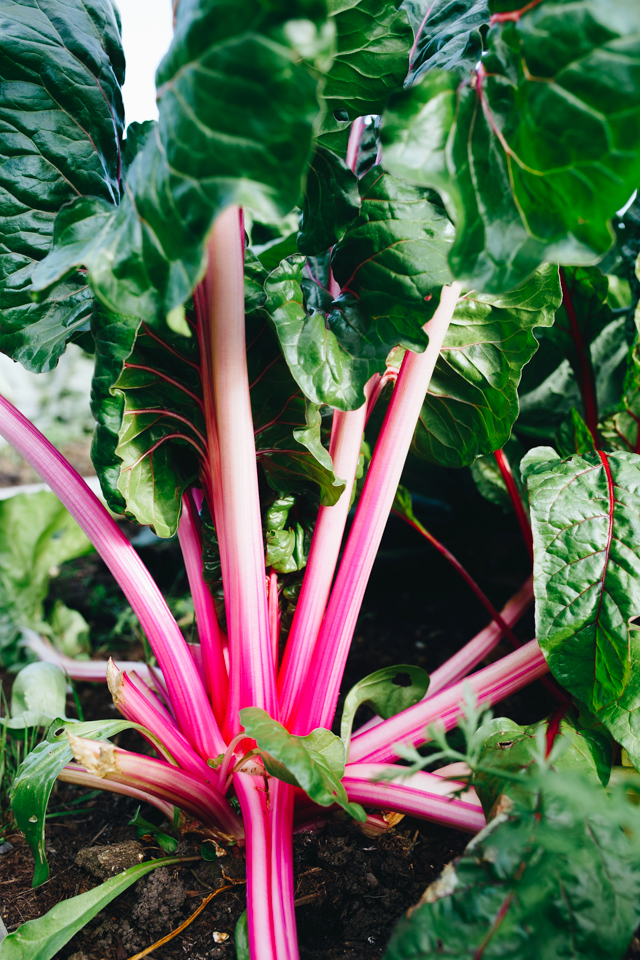 This time of year is just so colourful isn’t it? What with the trees beginning to change colour and lose their leaves, the bright pink and red and yellow Swiss chard stems, and dark ruby of the beetroot leaves, the garden’s looking just as beautiful as it did back in the height of summer.

I’m excited to see the beetroot I planted as a second crop (after my failed attempt at onions…) do so well! They should be ready to pick around December time, and will accompany many a meal of sausage and mash I’m sure. I’ve grown them in multi-seed clumps again, with up to four beetroot seedlings per position. As they grow I just pick out the largest from each group, leaving the others to grow on longer. It’s worked so well the rest of the year, and has provided more food per row from the soil than traditional spacing! 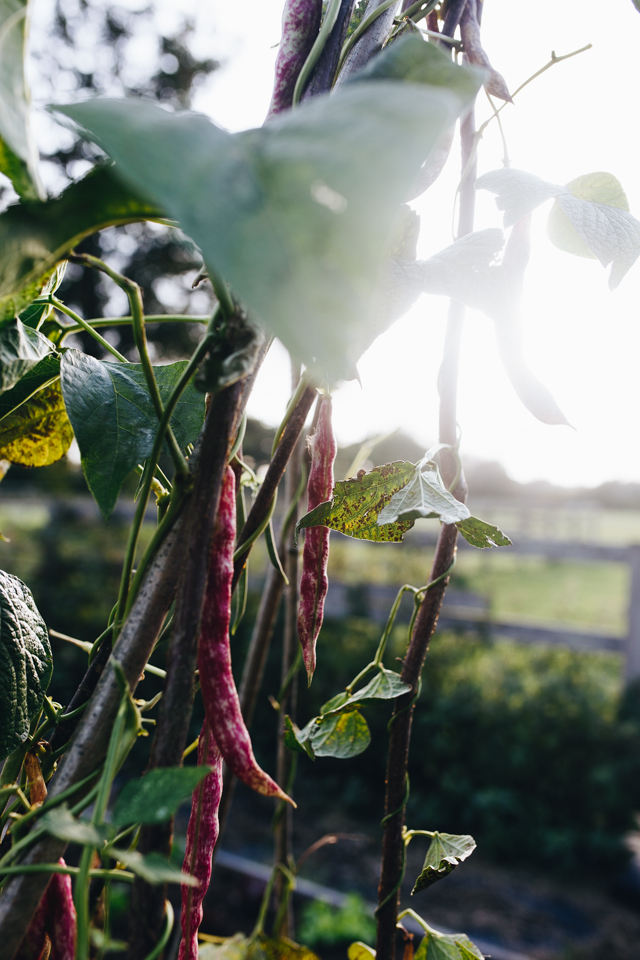 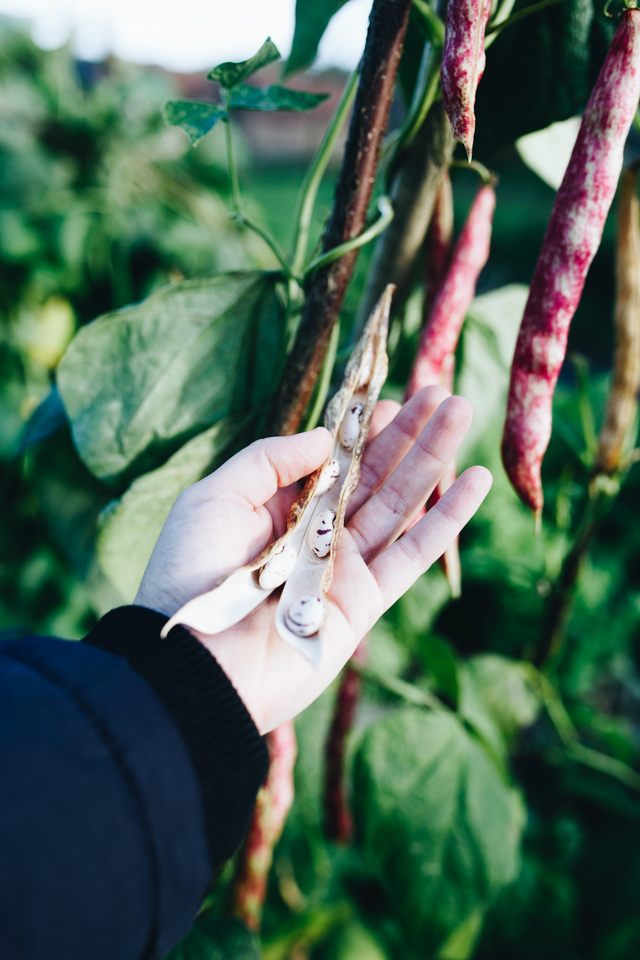 The Borlotti bean crop is still coming along, though since I’m leaving them to dry and only after the beans themselves instead of the pods, it feels like the most meagre harvest so far! But they do look so beautiful hanging from their teepee, and the dried beans will make a lovely addition to soup or a stew later this winter I’m sure. 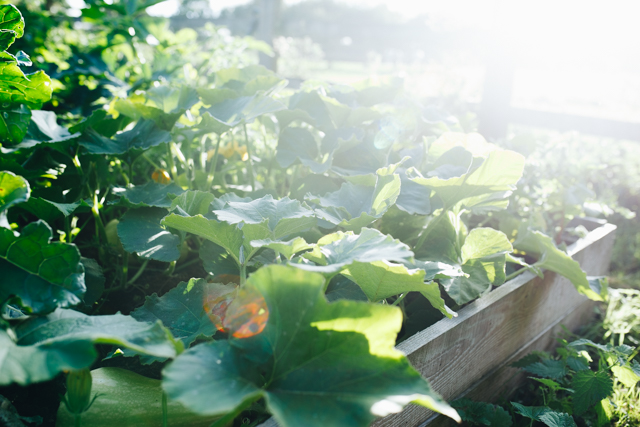 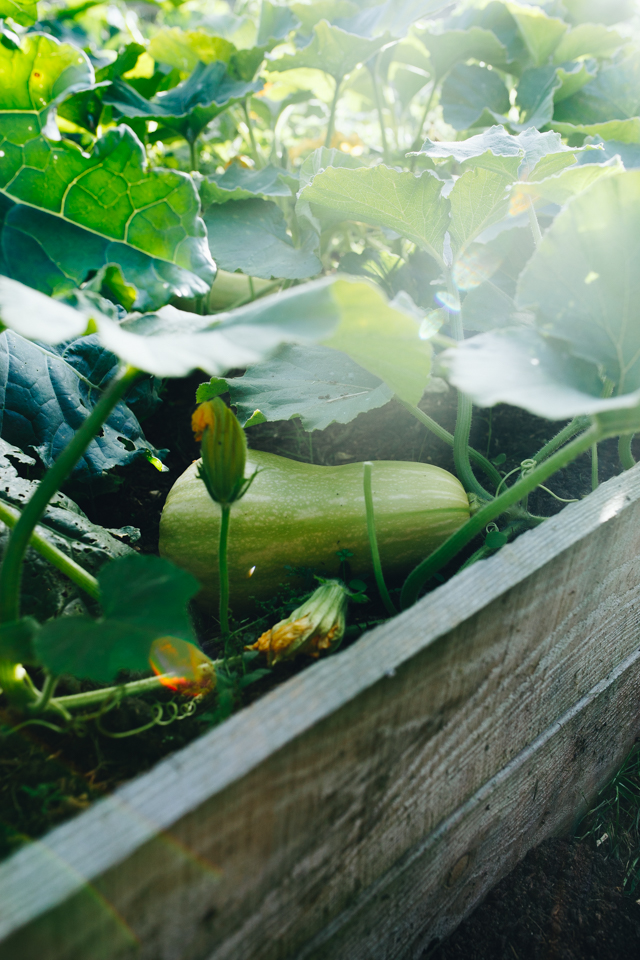 Perhaps the vegetable I’m most excited about though are my prize butternut squashes! Ironically of the two plants I have growing, it’s the that seemed to be lagging behind for weeks on end that’s suddenly put on a burst of growth and produced three full size fruits. They still have a little way to go before they’re that familiar tan colour and so ready for picking, so I’m just praying the weather doesn’t get too cold and nip them with frost before they fully ripen!

We’ve already had a mini butternut squash from the other plant already, which we cooked into a massaman curry a few nights ago with lots of coconut milk and some homegrown carrots too. It was the most delicious thing, creamy and warming and the squash itself was soft as butter too! I was so proud, ha! 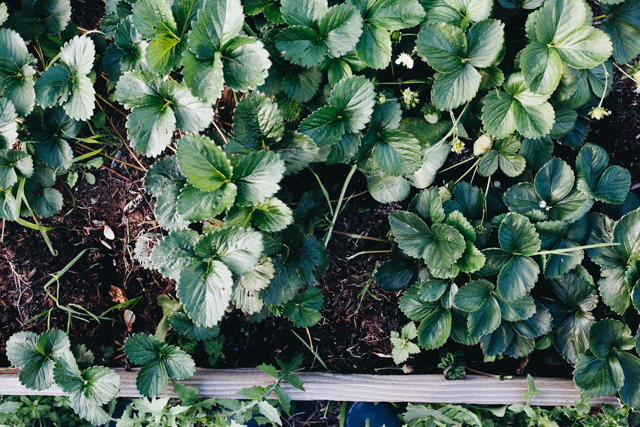 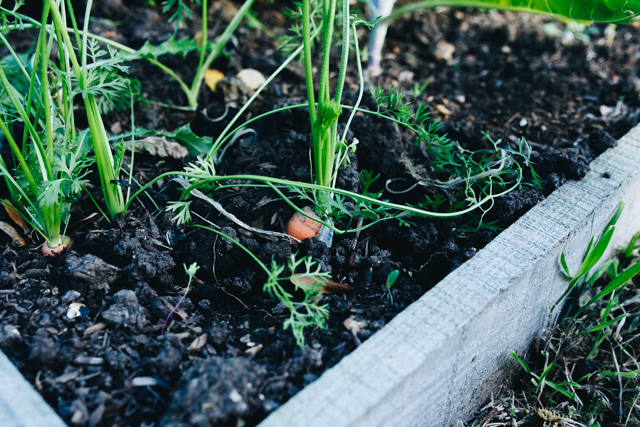 And that’s the round up for my little vegetable patch this month! I’ve managed to snatch some time in the last few days to pull up weeds, tidy up all the mess that had gathered round the edges of the beds throughout the summer, and just generally do a little maintenance before the weather turns truly cold (and before I pop!).

Our jobs for the coming couple of months are more about maintenance and preparation for next year- we’ve got compost to order ready for mulching all the beds over, two new 1x4metre beds to fill ready for raspberry canes going in later this winter, and four bulbs garlic to plant too! I’ve promised Ottilie she can help with that job, so I’m looking forward to a half hour of gardening soon with my favourite girl <3