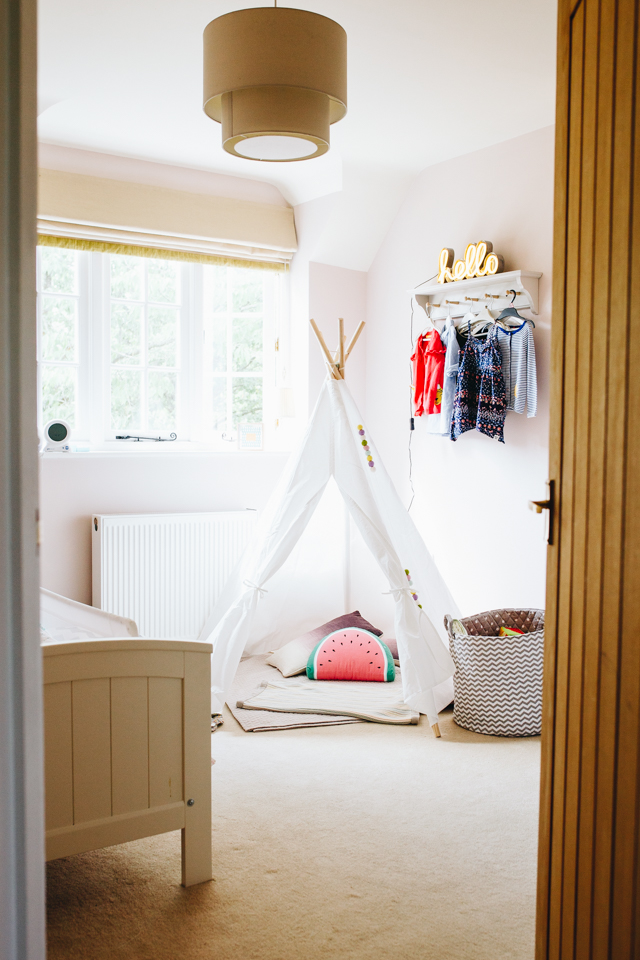 And just like that, my little girl’s baby bedroom transformed into a space perfect for the toddler that she is!

It feels a fitting time to have made over Ottilie’s bedroom, whilst pregnant with our next baby. It seems to fit the natural flow of our family life- as one little bird hops the nursery-nest and flies off into the realms of big-girl beds and reading corners, the next is ready to take her place in the cot! Oh, how the time flies when you’re watching children grow.

At the time of writing this I’m exactly 30 weeks pregnant, and feeling the familiar rise of the Urge To Nest! Lists are being made of all I want to get done by October, a list which includes (but is not limited to) painting the nursery, putting up a plethora of photos and prints, packing a hospital bag (in case my homebirth plans go awry), getting a truckload of newborn clothes washed and ironed, and of course I’m hoarding cleaning products like a madwoman and suddenly obsessed with scrubbing bathroom grouting and washing down cupboard fronts. Jason learnt last time to stay out of my way when I’m in nesting mode and to comply swiftly with all requests to tidy, clean, and sort, which is probably for the best ;)

So, back on topic, today I’d like to share a few photos from the mini makeover we’ve done of Ottilie’s bedroom over the last couple of months! I’m so pleased with how the room’s come together, and Ottie loves it too! 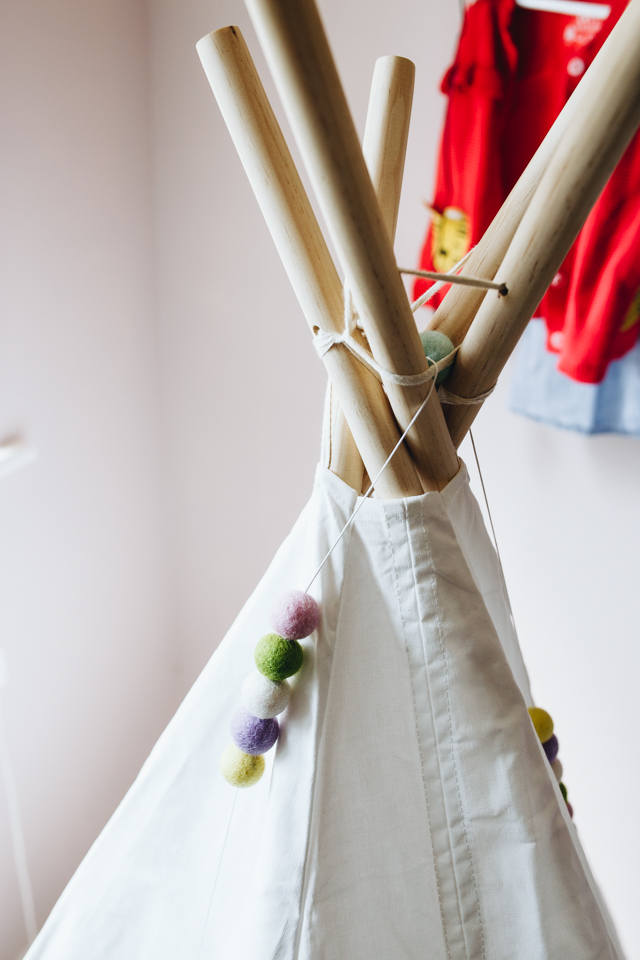 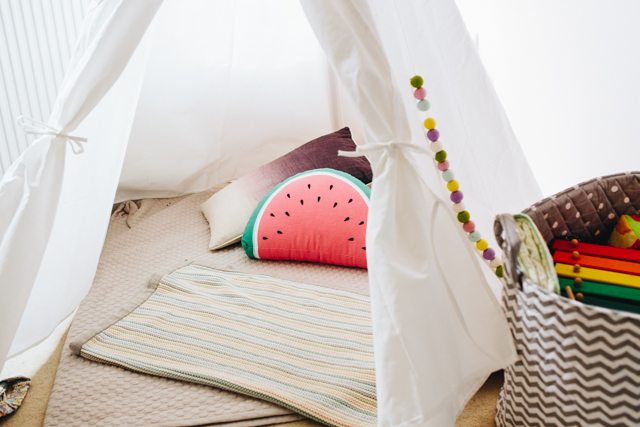 First up, walls! Jason painted the room as a surprise for Ottilie and me when we were away in France (the cutest <3), and the shade is Farrow & Ball ‘Chamomile’. I love how it’s a slightly dirty pale pink, and not a traditional ‘baby’ pink shade.

I think Ottilie’s favourite addition to the room though has been her new teepee! We’ve put it in place of the armchair that used to be in that corner, which we found just wasn’t being used since Ottilie started having bedtime milk and stories in her bed after we switched her out of her cot. And it’s been a standout hit! Ottie loves taking books in there to read either by herself or with us, putting her teddies and babies to ‘bed’ inside it under the blankets, or using it as a hiding spot during one of our very, VERY frequent games of Hide and Seek!

It was a total bargain too, bought from Hobbycraft on recommendation from Jen! I’ve put a few cushions inside (the watermelon one Ottie picked herself from H&M, she’s obsessed with ‘walkermelon’ and so I couldn’t say no to buying it for her!), and also strung that sweet felt pompom garland over it too! It was Etsy find, from a shop called Nordic In Kent. 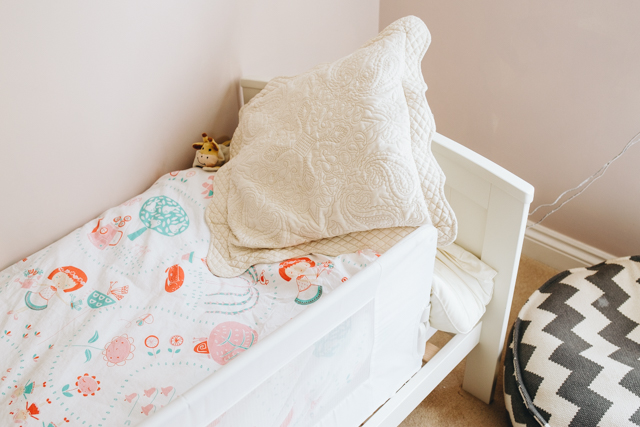 A quick note on Ottilie’s bed and the cot > bed transition- I’ll be honest, there was a period when I wasn’t sure we’d made the right call. We had a LOT of nighttime wanderings and very early starts, and I was a bit worried we’d turned our toddler from an excellent sleeper into a dreadful one!

But actually I think it was just a case of timing, as Ottilie’s cut two new teeth over the past few weeks since she went into her bed which has upset her sleep, and also I do distinctly remember her being an early riser last summer too. And she’s got loads better over the last few weeks- with a bit of help from the Gro Clock, she doesn’t really ever get out of bed at night anymore and we’ve pushed bedtime back to 8pm to help her sleep in slightly later in the mornings!

Oh, and still swearing by the Gro to Bed set for its genius integrated pillow and duvet with zippable sides, to prevent covers being kicked off in the night. Not so essential in this heatwave, but I think it’s the cleverest idea! 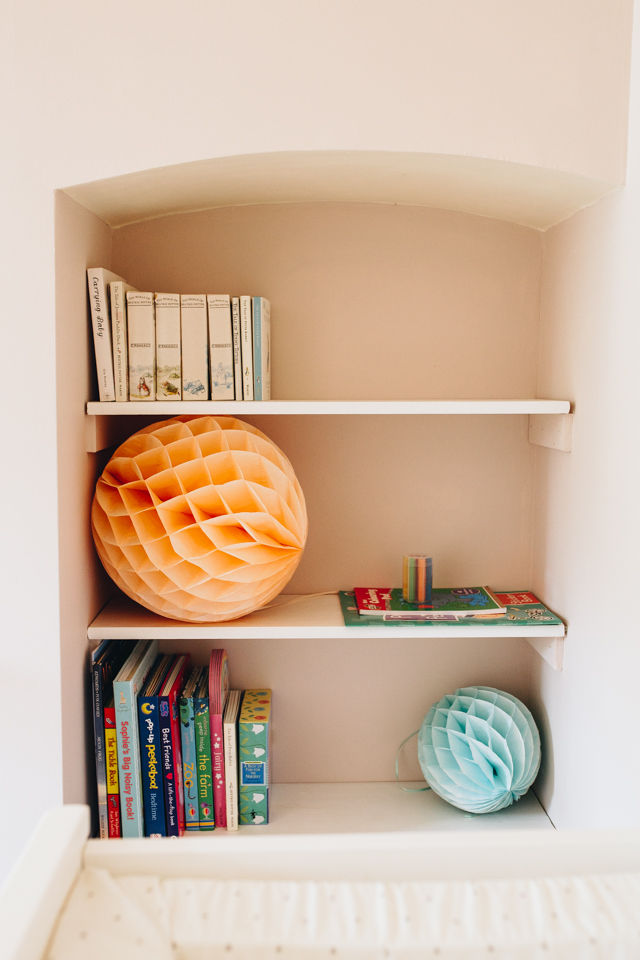 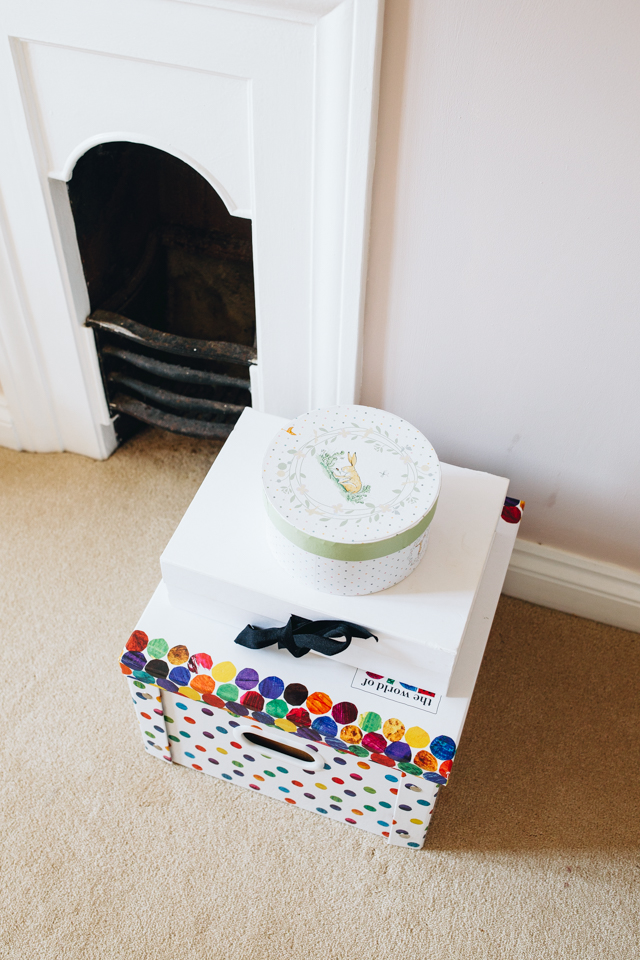 These toy storage boxes have been doing us proud for a good 18 months now I think! Ottie’s current favourite are all the wooden puzzles in the White Company box, which actually once contained a gift at my baby shower when I was pregnant with her! 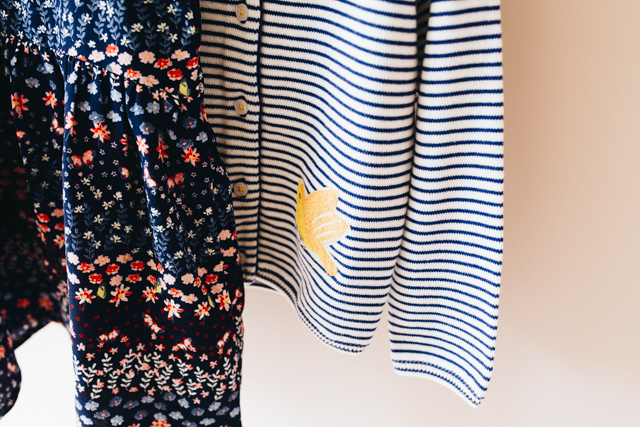 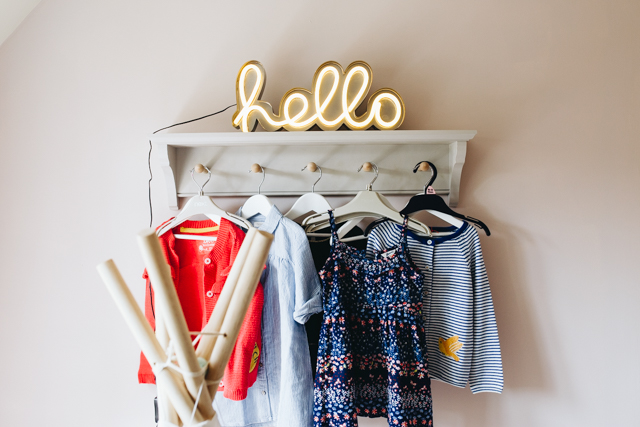 I came across this ‘hello’ faux-neon sign whilst shopping for some artwork for Ottie’s room, and I’m totally in love with it! It’s a lovely warm light just right for reading bedtime stories by, and I think it adds such a fun, modern feel to her room.


And the peg shelf has been one of my best purchases, which we’ve had since putting together the nursery in our old house before Ottie was even born! It’s another Etsy piece, though annoyingly I can’t seem to find a link for the shop online now. I’ll update here if I manage to track it down!

And on the mantlepiece below is a print I’ve been meaning to put up in Ottie’s room for months on end, and figured if I waited until I was organised enough to get a frame for it I’d probably still have it carefully packed away in an envelope when she’s off to senior school!

The print was an incredibly kind gift from Wendy at The Charming Press, and I just adore it. It’s personalised with the details of Ottilie’s birth, and I think it makes such a lovely addition to the room I’m going to get one done for the next baby when she or he makes an appearance later this year! 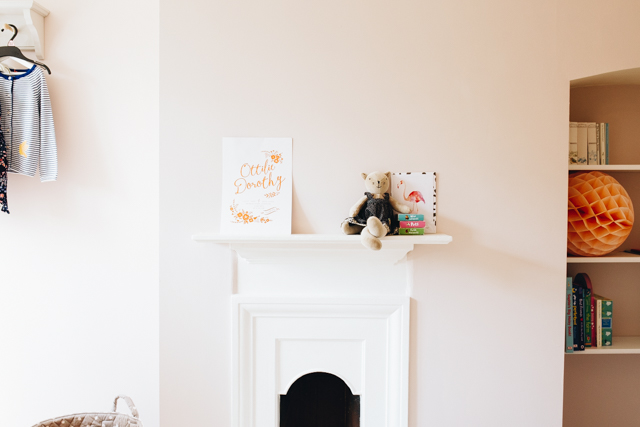 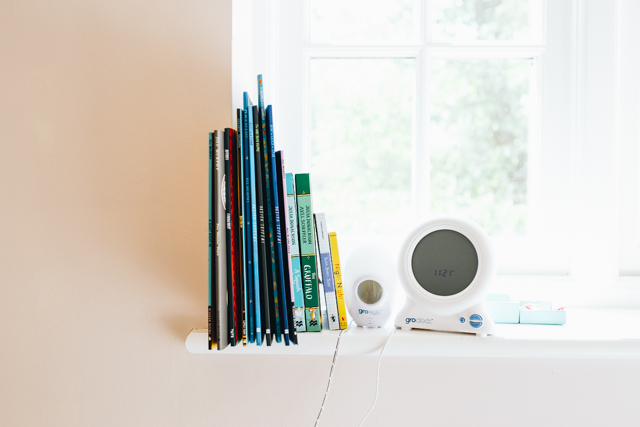 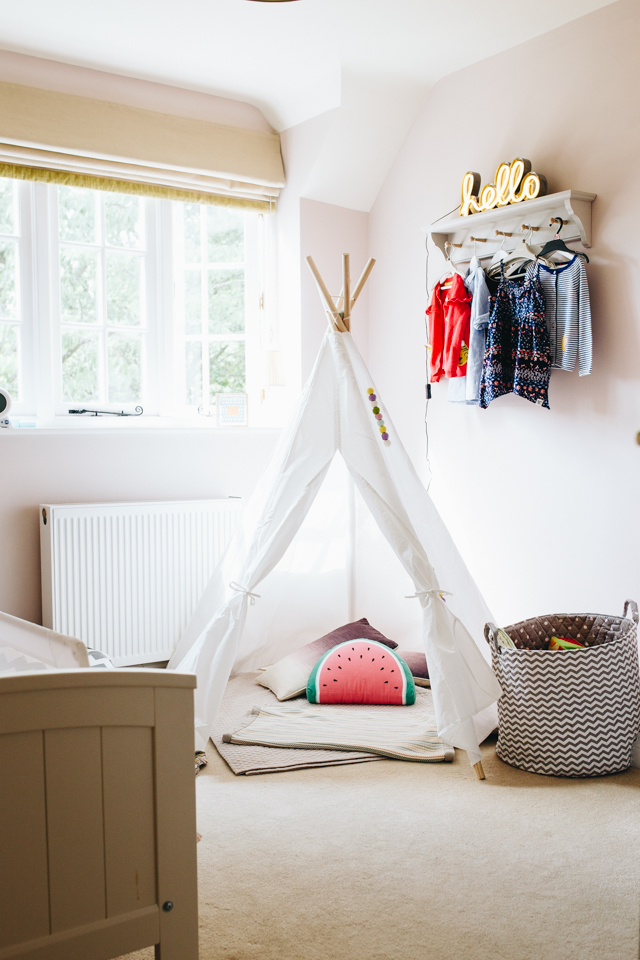 I’m so, so happy with how this space has shaped up, and it feels so good to have given it all a good sort out in preparation for the baby coming as well. I’ve had a big reshuffle of Ottilie’s dresser to make space for baby clothes, and put together a big basket full of muslins, swaddles, and blankets too. So, we’re getting there!

Let me know in the comments if there’s anything I’ve not linked to that you’d like a source for :) And I hope you like the room as much as we do!

1 Comment
Posted in HOME, INSPIRATION
Read from the beginning >