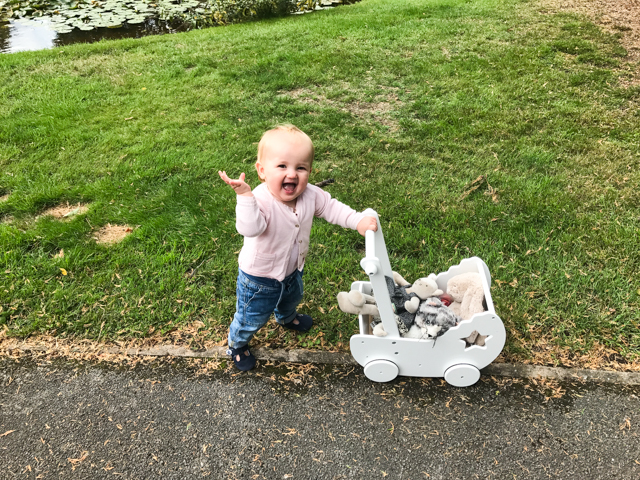 1. Watching my baby girl trundle along with her pram around the pond outside our house on Wednesday afternoon! She thought it was the best thing ever, being able to go for a walk outside, and it felt like the next step towards her being a toddler and not a baby! My heart actually broke a little when she stopped to wave hello at a builder working a few houses down from ours, the cuteness was just too much <3

2. The piles of fallen leaves we crunched though on our way up to the park after tea a few days ago. Autumn is here!

3. Using this dreamy Aesop oil before bed- it makes my skin GLOW. And aren’t Aesop products the best smelling products going? (It was a gift to me from Tania and Freya for being a Mama for a whole year! Aren’t they the sweetest?)

4. Fresh bedlinen, spritzed all over with ThisWorks Deep Sleep spray. So relaxing!

5. This lentil dahl for dinner, ready and waiting when I got home from Body Balance on Wednesday.

6. Having a batch of homemade cookie dough in the fridge, ready and waiting to be baked. I think it should be a permanent fixture of our kitchen, to be honest!

7. Rediscovering an old pair of shoes. Currently living in a pair of striped French Sole flats I’ve had for a good two years but never really worn, and loving them!

8. Handing over bedtime duties to Jason! Just this week we’ve introduced a bottle for Ottilie at bedtime (rather than me breastfeeding, which I’m still doing in the day), and it’s so lovely seeing her go to him for a bedtime bottle and cuddle at the end of the day. And also so lovely feeling like I’m gaining a little bit of freedom! Ready for another baby now…;)

9. The GIANT bag of spinach and Swiss chard my neighbours gave me from their allotment this week! My Swiss chard is having a lull since I replanted a load of it, so I was very grateful!

10. Celebrating a year of parenthood with our NCT friends last weekend! We had a little party for the babies (complete with mini bouncy castle!), and it was so sweet seeing them all together again for the first time in a good few weeks. We’ll ignore the fact that at least half of them now have colds after having played together last Sunday- I’d forgotten how much germ sharing goes on when you get seven babies together in the same room!

2 Comments
Posted in 10 THINGS
Read from the beginning >