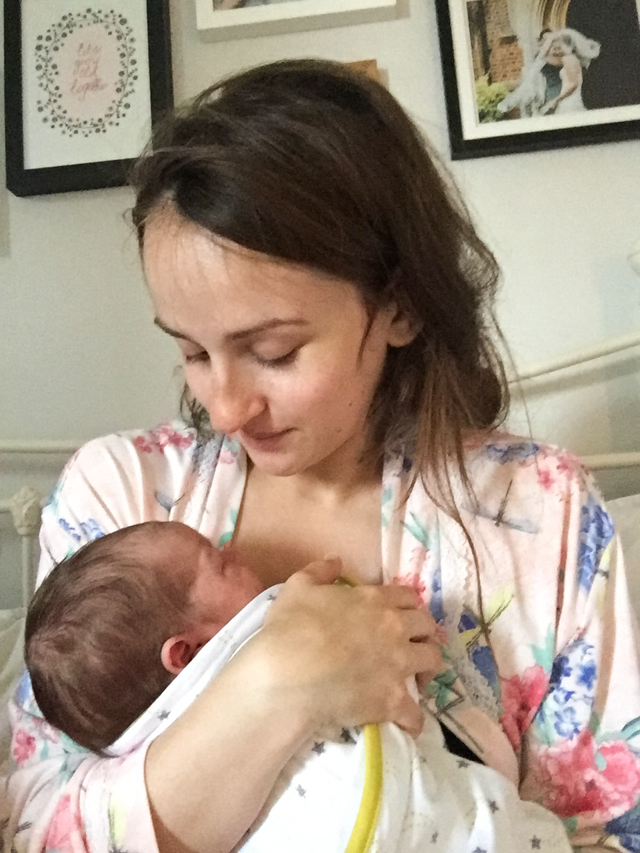 A few weeks ago I finally got round to printing out a load of photos from the past 7 months (Ottilie is SEVEN MONTHS. When did that happen?!) , and putting them all into an album. Doing it brought back so many memories of the early weeks of motherhood, when day blurred into night and I felt like I was falling bleary-eyed through an endless cycle of three hourly feeds, nappy changes, and sleepy cuddles. I have so many fond memories of that time- of snuggling a teeny tiny Ottilie with her tufts of dark fluffy hair soft against my cheeks, of the way her breath smelled so sweet and milky and delicious (I used to take great deep breaths of it with my nose pressed up to her lips!), of the funny little squeaks and chirrups she used to make whilst awake.

But I also have found those first few weeks totally overwhelming! I remember crying literally all day, the day before Jason went back to work after paternity leave. Being left alone with Ottilie felt so incredibly daunting, and I didn’t want to leave the lovely little bubble the three of us were in together. My mother in law, Jason’s sister and my niece and nephew came to the rescue for me that day. I drove Ottilie and I over to see them, and they fed me biscuits and cuddled Ottie whilst I attempted to chill out! <3)

Looking back a few months down the line, I can completely see why so many women talk about a ‘postpartum fog’ and say that it took them the best part of a year to start feeling like themselves again. It’s only been in the last couple of months that I’ve begun to feel confidence again in how I look (more on that later), Ottilie’s recently settled into a routine that’s given me back some ‘me’ time during the days, and I feel like I’m back to pre-pregnancy levels of energy and vigour.

There’s so much pressure to ‘bounce back’ from having a baby, and I wanted to say in writing, here and now, that I did *not* bounce back! I do remember comparing myself a few times to friends of mine with babies, and to mothers I saw on social media who seemed to have it all together and wonder why it seemed like I was the only one finding some days so tricky. And then it occurred to me  that judging by my Instagram account, noone would ever, ever have known that I wasn’t spending all day every day swanning around town, dressed immaculately and with an equally immaculately dressed baby sleeping peacefully in her pushchair!

And, since I’m keen for Cider with Rosie to be a place of honesty, and sharing, and kindness and kindred spirits, I wanted to share a few of my ‘postpartum truths’.

- My shape is different. So different! I’ve gone from a size 6 to a size 8/10, and though my tone is coming back and I’m gradually shifting the last of the softness I gained during pregnancy, it’s slow progress. My hips are broader, my thighs are wider, my boobs are GINORMOUS (I must have gone up at least three sizes, honestly!!) and my stomach isn’t taut and toned in the same way any more. I have days where I’m okay with it and days where it makes me sad and I don’t feel particularly self confident, but in general I’ve actually found it less of a concern than I thought I might do before I had Ottilie.

- We have easy days, and tricky days. Days where Ottie is happy and playful and naps like a champ and I have endless patience and don’t feel tired and motherhood honestly feels like growing your own mini best friend! In fact, most of our days now are like that, and it’s incredible! The love I feel now on a daily basis is overwhelming. But during the four month sleep regression when for two months straight Ottilie would wake up every hour during the night, I felt like I might pass out from the tiredness. I pranged my car twice because I was so exhausted and barely functioning, and my patience was tested to its absolute limits. What got us through was co-sleeping, not listening to anyone else’s advice about having to do sleep training/crying it out/getting tough, and holding onto the ‘this too shall pass’ mantra.

- Comparison is the thief of joy, and this is SO true of motherhood! I’ve had to learn not to compare myself, or how I parent to anyone else, because all babies are different. For months I couldn’t for love nor money get Ottilie into any kind of routine or to nap in her cot, and I tied myself in knots agonising over it. I was convinced it made me a crap Mum. But guess what? Ottie just wasn’t ready for a routine, and about a three weeks ago she finally slotted herself into one with absolutely no input from me whatsoever! I’ve learnt that babies basically eat when they want, sleep when they want, and behave how they want to, and there’s very little we do as mothers that affects that!

- Getting out and about and having company kept me sane. When I was just about to give birth, I lost count of the amount of times I was told not to bother getting dressed during the early days and weeks of motherhood and to just camp out at home in my PJs. In reality? That drove me NUTS. I absolutely had to get out every day just to feel like I was coping with the challenges of having a young baby, and meeting up with other new Mums at baby classes and popping out for coffee with my NCT friends was a lifesaver. It’s much easier to cope with a wailing baby when you’ve got a friend there for moral support and a slice of cake in front of you, after all! Advice is there to be taken with a pinch of salt- use what applies to you, and ignore the rest.

In short, the moral of this mammoth post is this: It gets easier. And harder. And then easier again. The fog lifts, and you’ll find yourself again. You’re the best Mum for your baby, and noone’s ‘coping’ any better than you are, I promise…<3