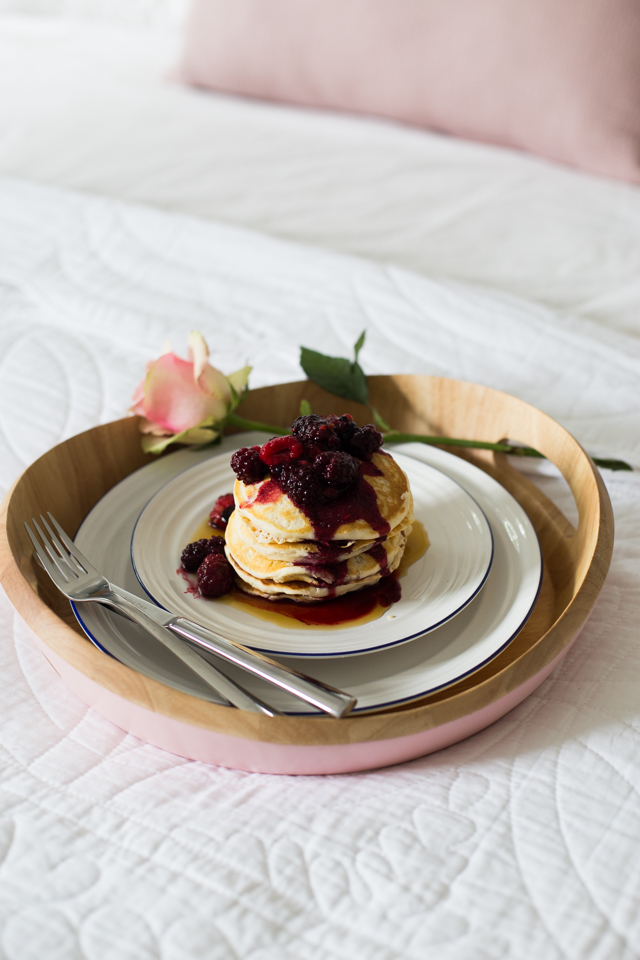 The joys of this pancake recipe were revealed to me this weekend, and quite by accident.

I’d woken up on Sunday with a hankering for proper American pancakes, and then realised that tragedy had struck and we were out of eggs! I turned straight to my phone to look up ideas for egg-free pancake recipes (nothing *too* virtuous- it was a Sunday, after all!, and came across this promising looking one from Food Hero.

‘Let’s give it a go’ I thought, ‘they might turn out alright!’ and headed downstairs to the kitchen… 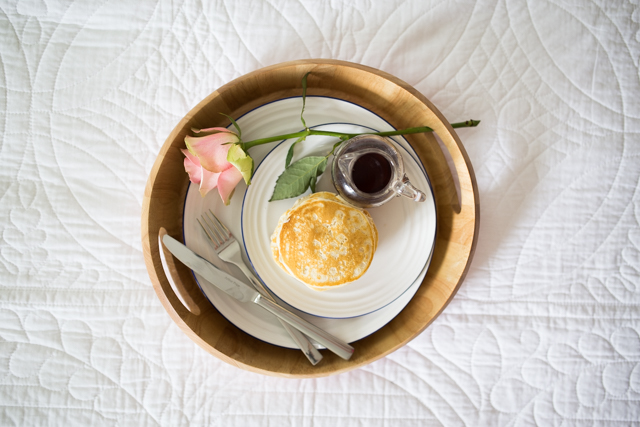 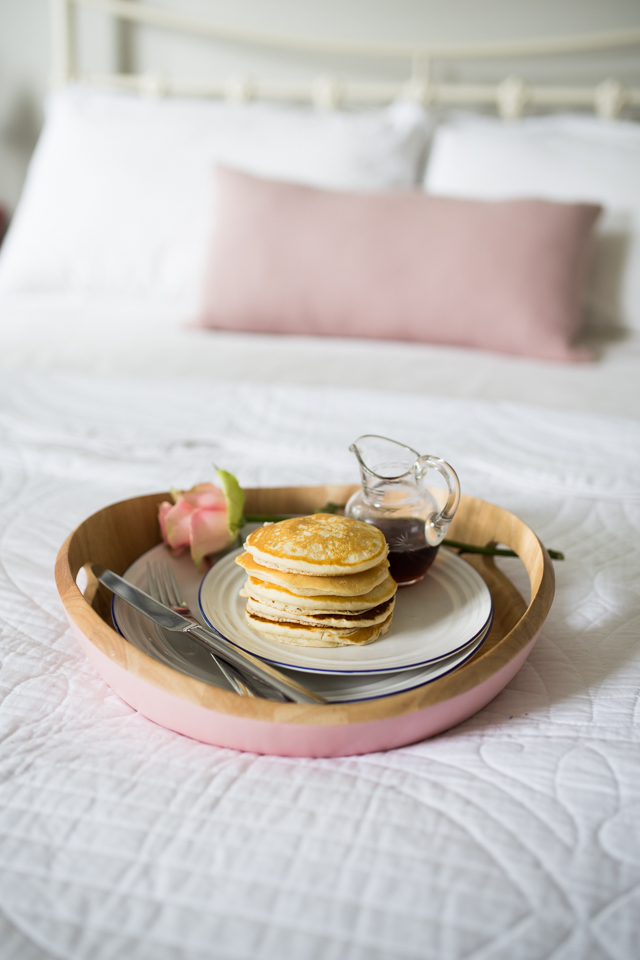 And the results, it turned out, were better than just ‘alright’. These are easily some of the tastiest pancakes I’ve ever, EVER had!

The texture is lighter than light, and reminds me of the delicious Scotch pancakes I used to eat toasted and spread with butter as a post-school snack as a child. And even though I used almond milk in place of cow’s milk (hence the ‘accidental vegan-ness’ of this recipe) and they’re without the usual egg or two you’d find in an American pancake recipe, they rise like a dream!

In fact, they feel positively virtuous compared to the pancakes I’d usually treat myself to on a Sunday, when the mood strikes!

But enough of the chat, because I’m sure you’re convinced. Let’s get to the recipe! 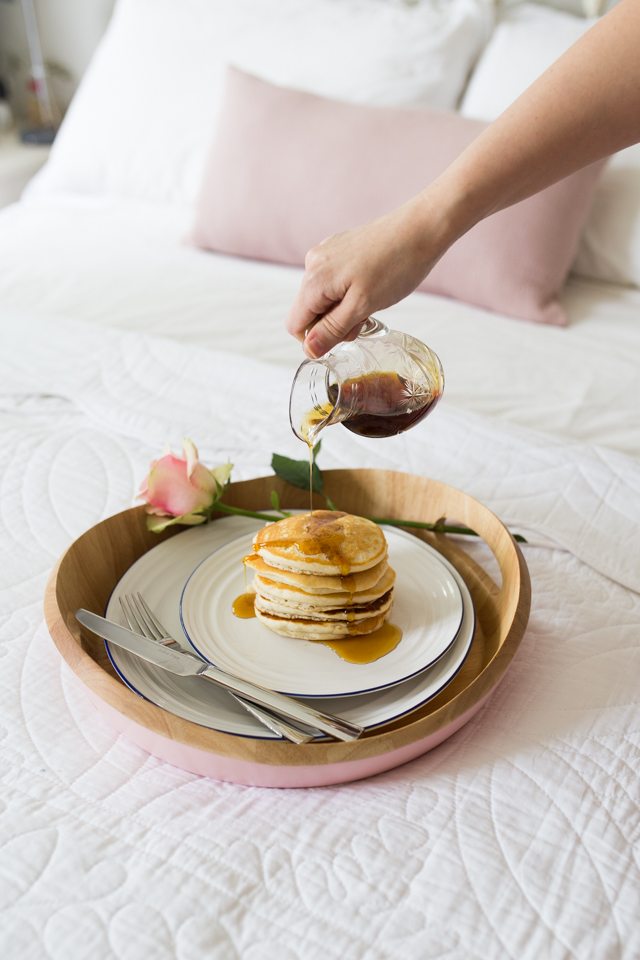 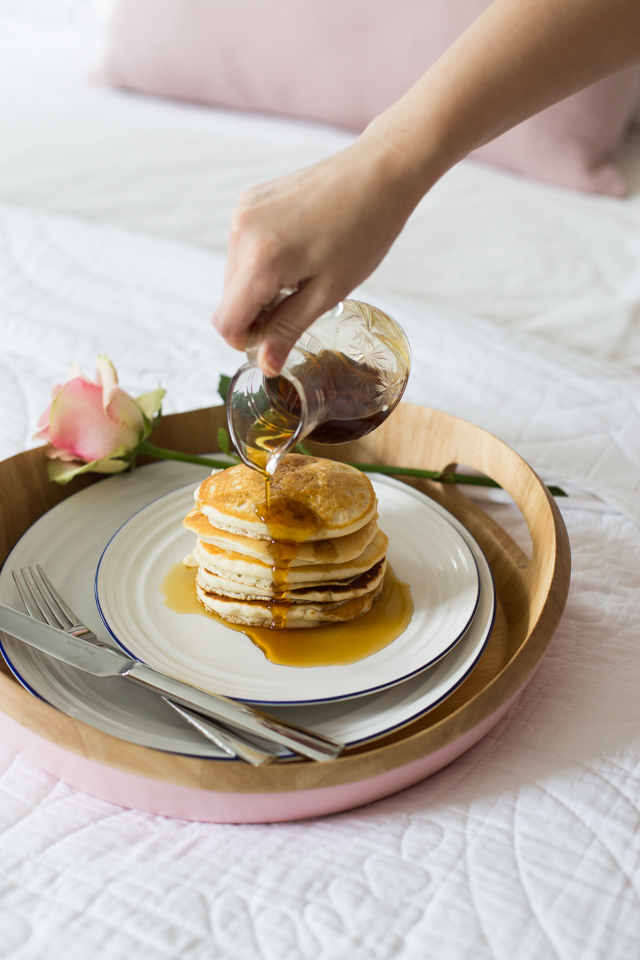 Recipe tweaked (minimally) from Food Hero. Serves two. Or one, whatever floats your boat…

- Whisk together the dry ingredients in a large bowl, and then add in the almond milk, oil, and vanilla and whisk again until just combined.

- Add in the extra almond milk a tablespoon at a time until you’ve achieved a smooth dropping consistency.

- Heat a small amount of coconut oil or vegetable oil a large non-stick frying pan set over a medium flame, and then spoon in rounds of the batter a couple of tablespoons at a time.

- Cook for a minute or so, until bubbles form on the top of the pancake and the underside is set, then flip and cook until the second side is golden.

- Serve with syrup, yoghurt, fresh fruit, and/or compote! (To make the compote shown here, simply soften a couple of handfuls of frozen summer berries in a small pan with a splash of syrup to take away the tartness!) 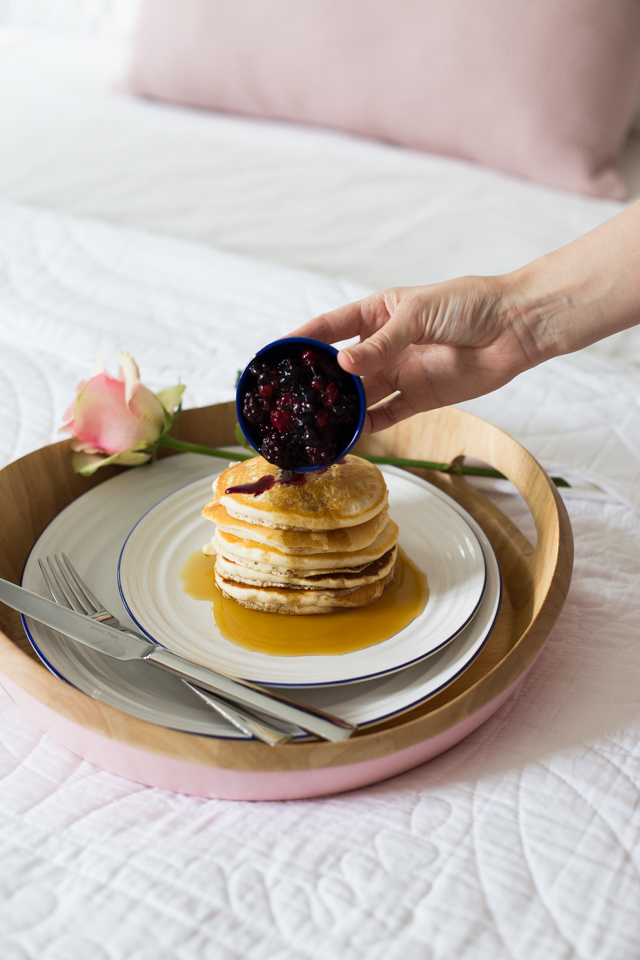 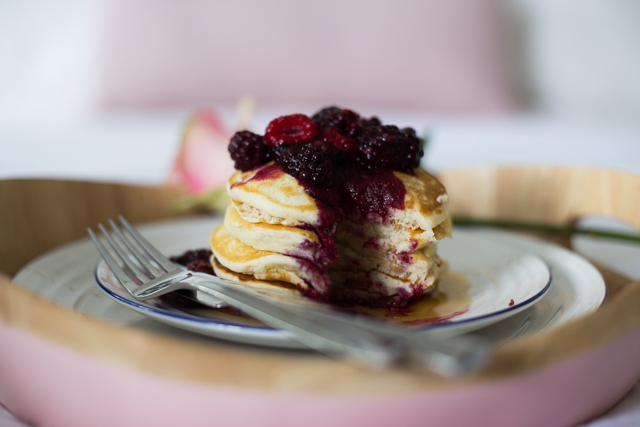 p.s. Quilted bed throw is from Next, blue-edged plates are from John Lewis, and the tray is an old one from Sainsbury’s but an alternative is linked below!

28 Comments
Posted in BREAKFAST, RECIPE, SWEET
Read from the beginning >