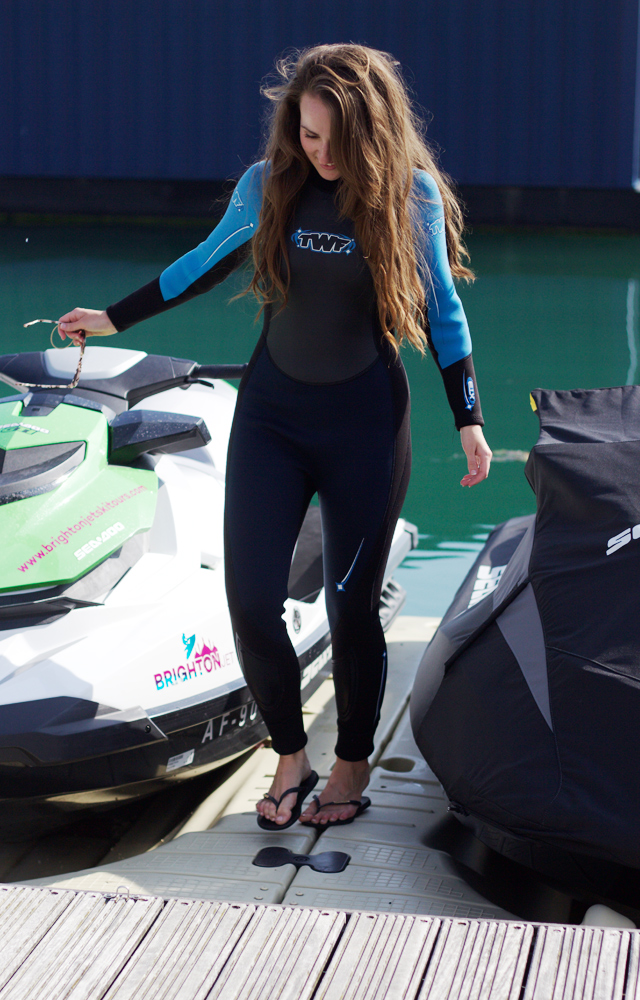 After we’d stopped to refuel at The Breakfast Club (and agreeing that yep, the food there most definitely lives up to the hype), Mum and I hopped onto the little train that runs along the sea front, and headed East from the pier towards the marina.

Comfortably full from lunch, we trundled slowly along the beach on the tiny train, working up more than a few butterflies in our stomachs thinking about the next activity on our agenda for the day… 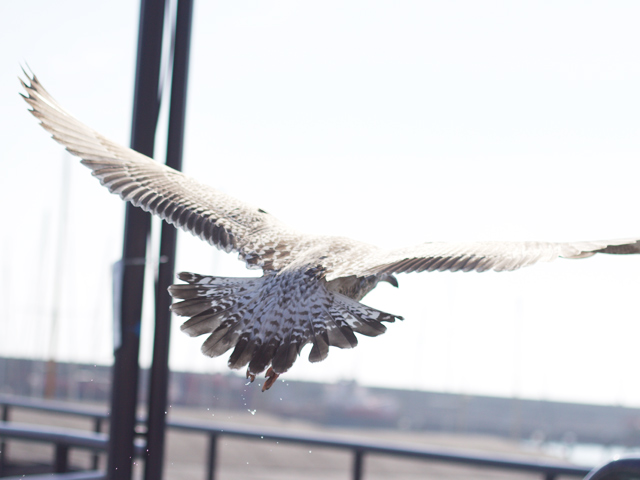 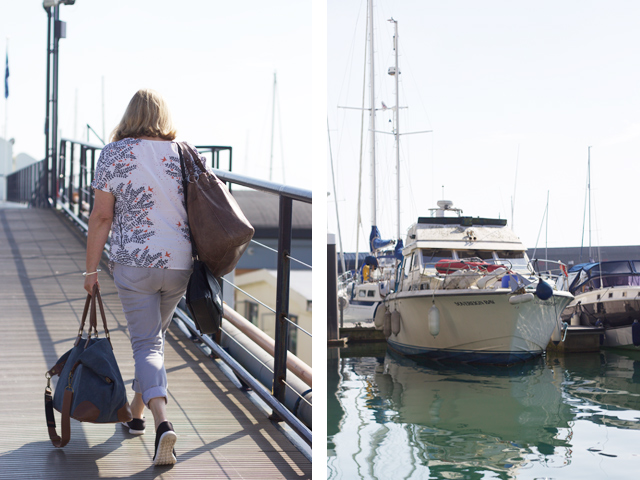 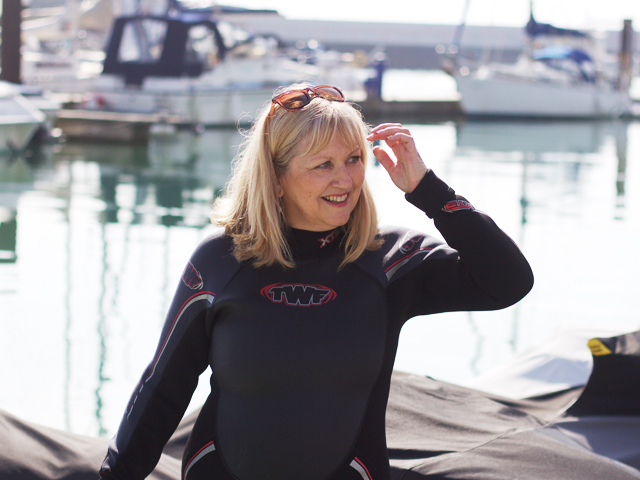 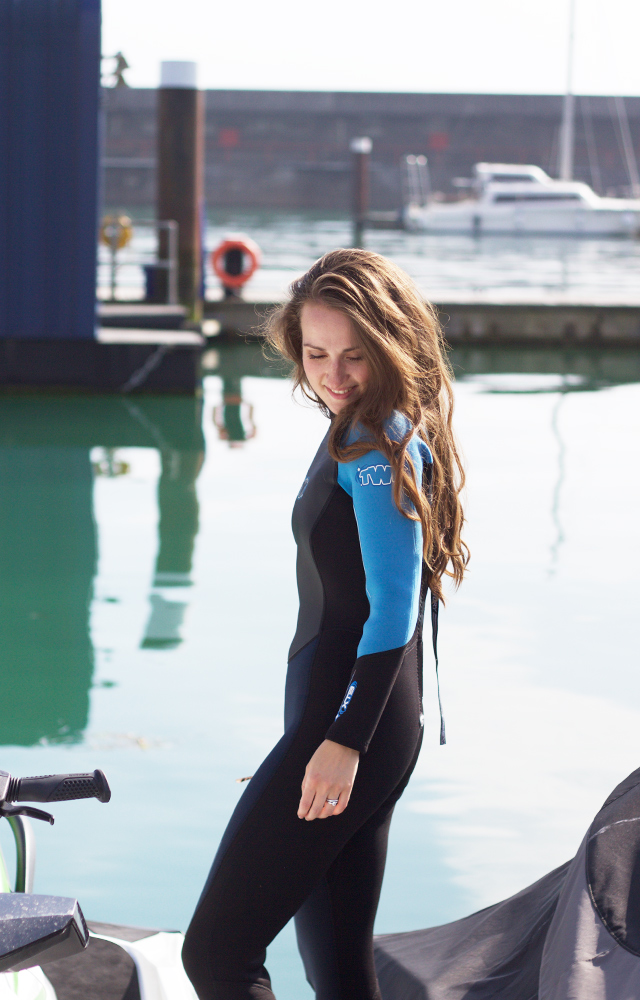 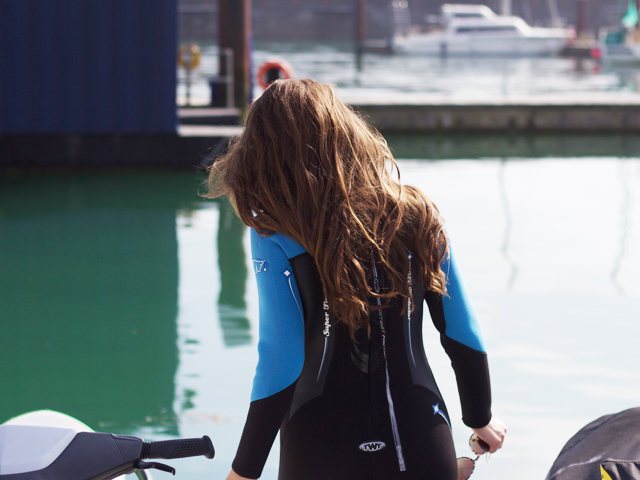 Our slot on the skis was booked for 4pm, and we were equal parts nervous and excited. Neither Mum or I had ever done anything like jet skiing before, and I had visions of us being so appalling at it we’d end up crashing into a passing boat or falling off our skis or something else equally ridiculous!

We met Steve, our instructor and the owner of Brighton Jet Ski Tours (who I’d booked our experience with), on one of the jetties, eagerly donned wetsuits, and then took our places on a couple of jet skis.

After a quick lesson in how to work them, we carefully negotiated our way one by one out of their little docking points, and began cruise slowly out of the marina. 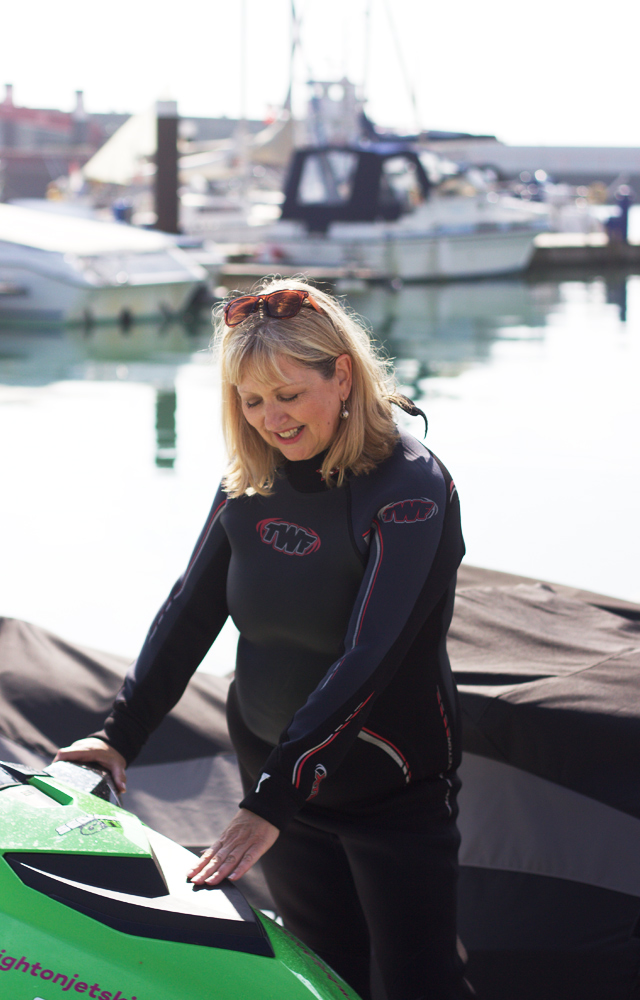 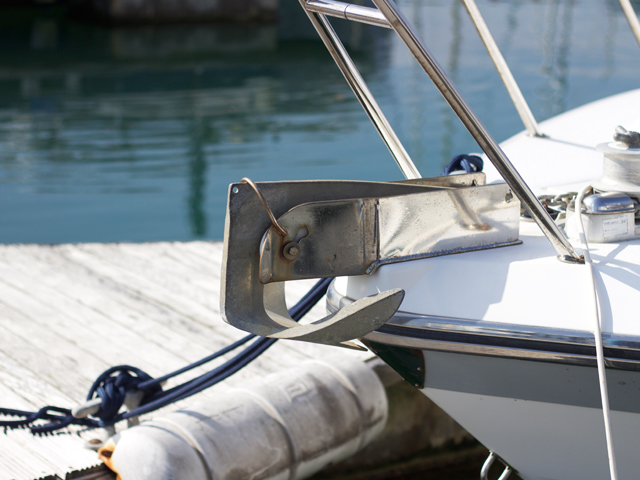 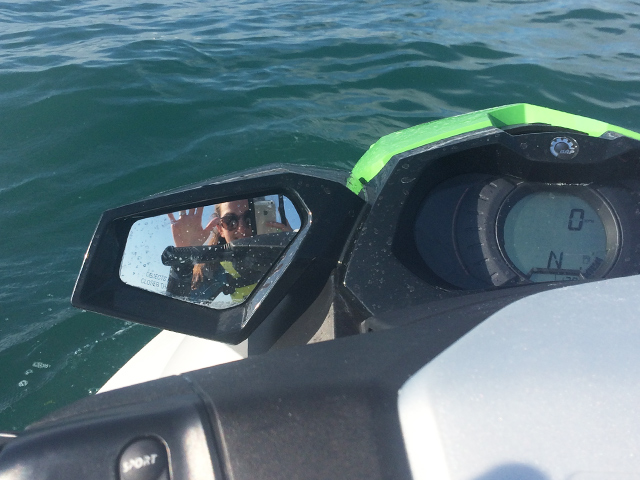 I’d expected that perhaps we’d have to be given lots of lessons about how to ride the skis once we were out on the water, and that Steve would stick pretty close by us to monitor how we were getting on, but in fact, just as soon as we were clear of the land, we were off!

Steve and my Mum were up ahead of me flying so fast it was all I could do to keep up with them both (my Mum’s got this thing about speed!), and the adrenaline that rushed through me the second I opened up the throttle and began to speed faster and faster across the open ocean…well. I can barely explain it!

(We’re switching to iPhone shots from now on- I had it strung round my neck in one of those little cheapo waterproof bag cases. A true lifesaver- at the speeds we were doing, I’d have lost it over the side for sure otherwise!) 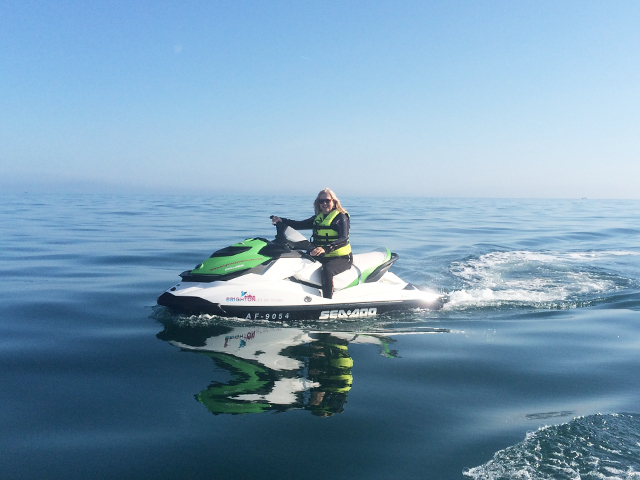 The water was still as could be, and the faster we went on our skis the more it felt as though we were skimming just above the surface of the water, barely touching it at all.

I kept finding myself laughing out loud as we raced faster and faster towards the horizon, and had these bursts of pride watching my Mum flying in circles around my jet ski looking more vibrant and joyful than I think I’ve ever seen her. 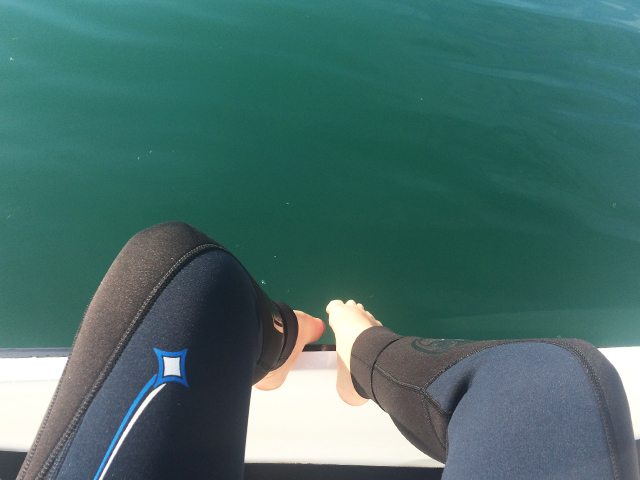 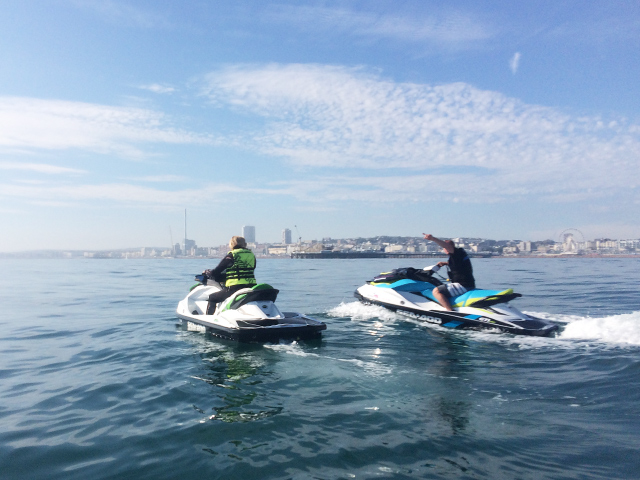 After a good 10 minutes or so of racing along at speeds of 40 miles per hour, we paused to catch our breath.

Mum and I were in mid-flow discussing the feasibility of us buying our very own family jet ski (not feasible, as it turns out…), when Steve interrupted us to shout the most magical two word sentence I’ve ever heard in my life. 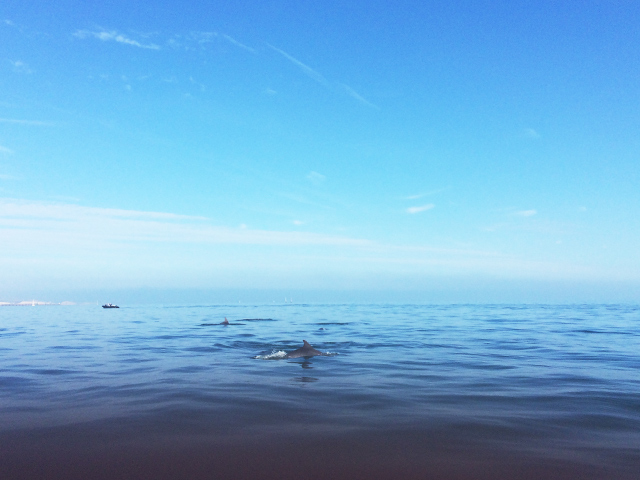 A pod was a little way away from us following along in the stream of a boat, playing and dancing and cresting out of the water every few metres or so.

We watched them, mesmerised, as the group danced along beneath the still water and the mothers led their tiny calves up to the surface for air.

The experience of watching them from a distance was more than wonderful enough, and yet our luck was to double, treble, quadruple!- because about twenty minutes later, we found ourselves with a second pod swimming all around our jet skis! 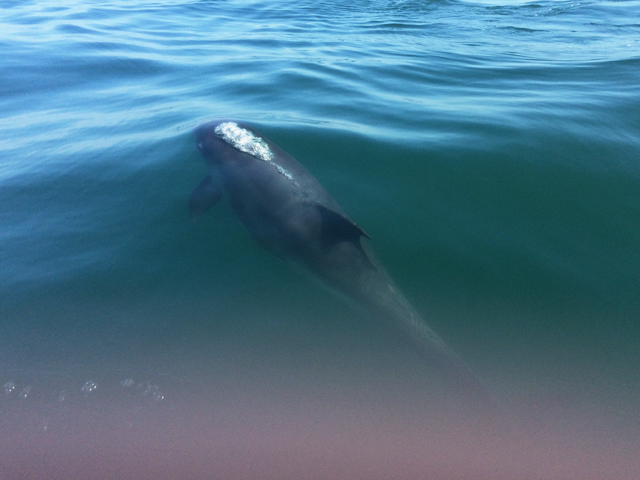 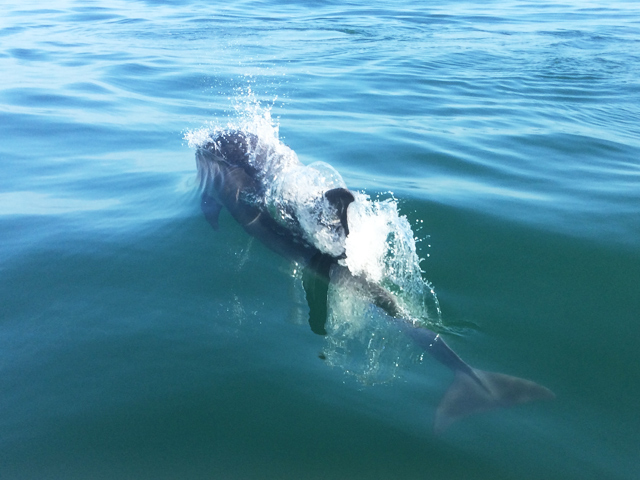 At times they were close enough that we could’ve reached out and stroked their sleek grey backs (we didn’t, of course!), and they kept pace with us as we floated slowly along on the water.

It truly was the most breath-taking experience of our lives- having these beautiful, powerful creatures gliding along next to and beneath us, watching them leaping clear of the water, and knowing that the experience we were having was a real once in a lifetime encounter with truly wild and free animals.

I’ve been obsessed with sea life for as long as I can remember (I wanted to be a marine biologist for a long time, but had to let go of the idea when I realised I lacked a vital aptitude for science ;) and so getting to be so close to dolphins in the wild was pretty much a dream come true. 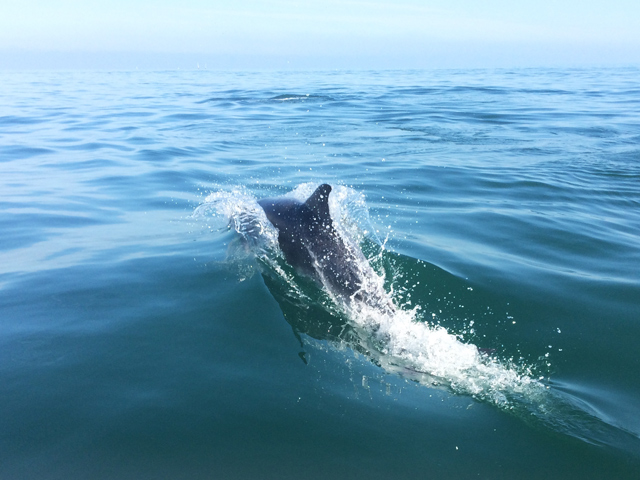 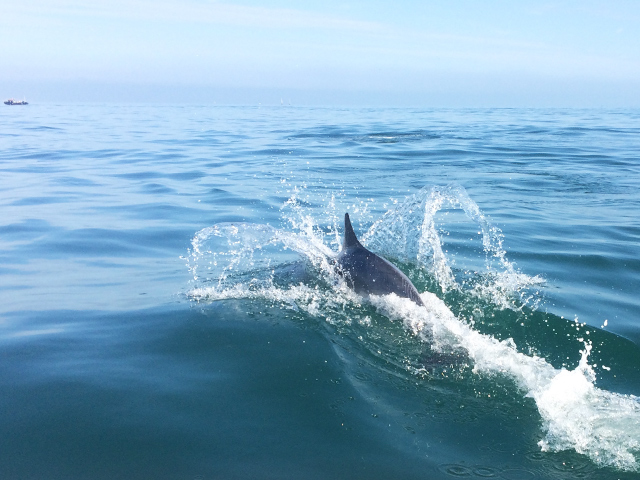 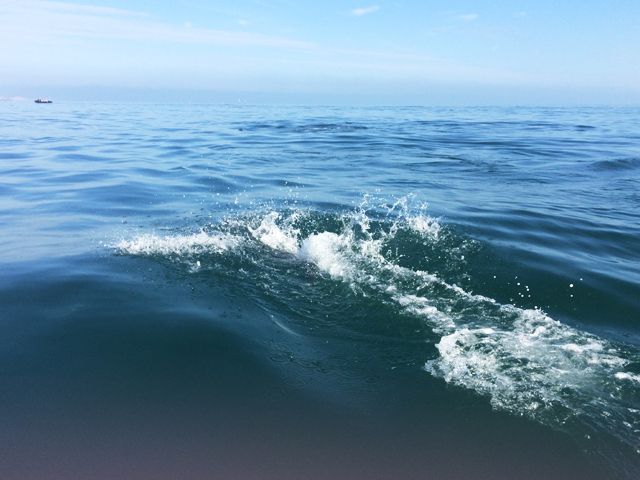 This little video snippet does the experience more justice than I could do in a thousand words!…

{Dolphins in Brighton! from Rosie Chappel on Vimeo}

And with that, our time out on the water had to come to an end.

I could happily have stayed out there all evening, watching the dolphins play and the sun dip lower and lower in the sky. In fact, Steve told us that he was going to head back out again right after we’d said (a somewhat reluctant!) goodbye and thanked him for an incredible afternoon. 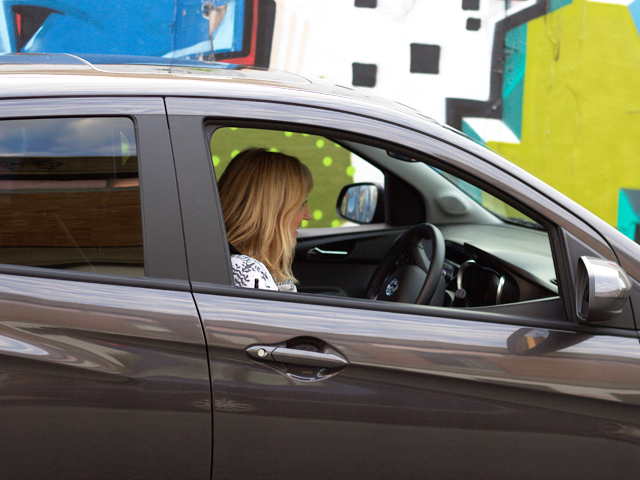 Mum and I hopped back into our ride, put the music up loud, and drove back home towards the setting sun.

And given how many times since we’ve turned to one another and said ‘Wasn’t that just the best experience ever?’, I don’t think it’s a day we’ll be forgetting any time soon.

~ This post was sponsored by Vauxhall, as part of their #ThisGranCan campaign and in celebration the relaunch of the VIVA. Both Mum and I were so impressed with how light and easy to handle the car was- in fact, I was quite sad to say goodbye to it when the time came! ~