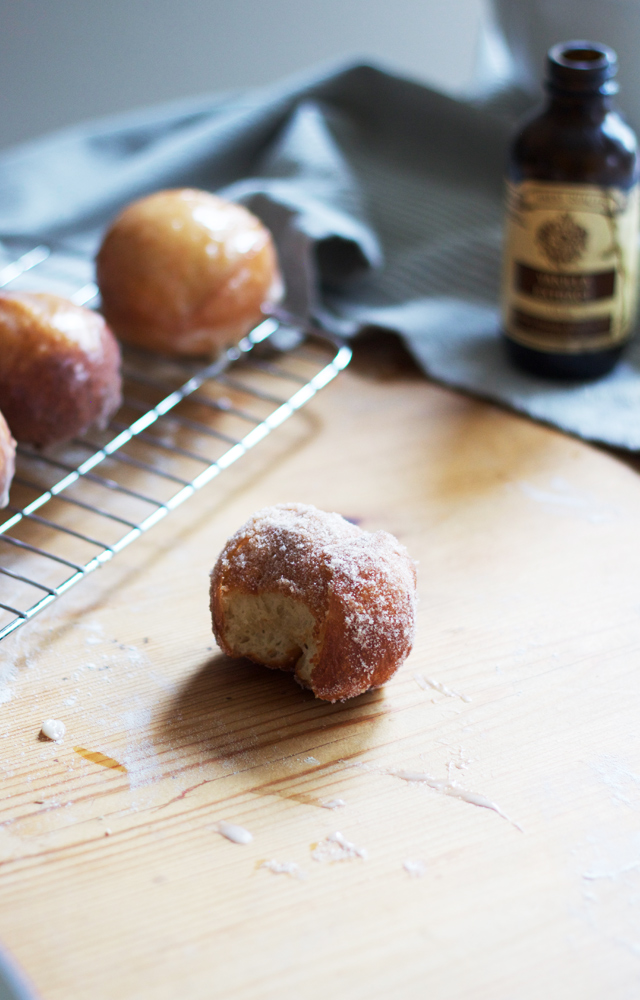 Sometimes, Mondays can only be made better by the addition of doughnuts.

I mean, it’s not as though there’s ever a bad time to eat a doughnut. What could ever be wrong about taking a round of soft, sweet dough, frying it until it’s crisp and golden outside and fluffy within, coating it in one form or other of sugary coating, and then settling down to eat it with a cup of rich, strong coffee on the side? It’s a blissful experience, and if you ask me, one that can’t be topped. I just feel sure though that if there ever was a *right* day to eat a day a doughnut, it’s a Monday. 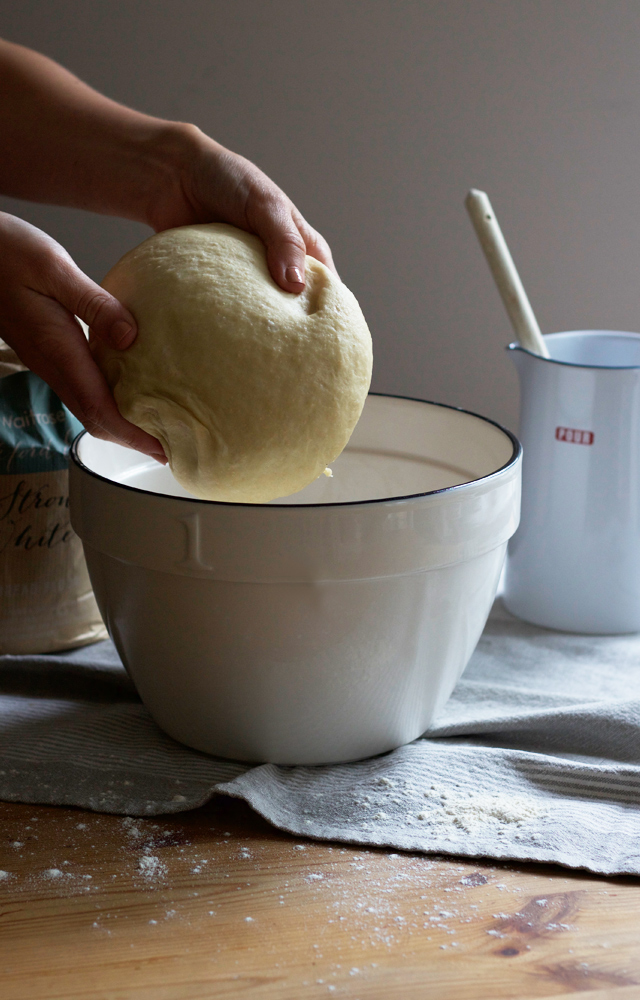 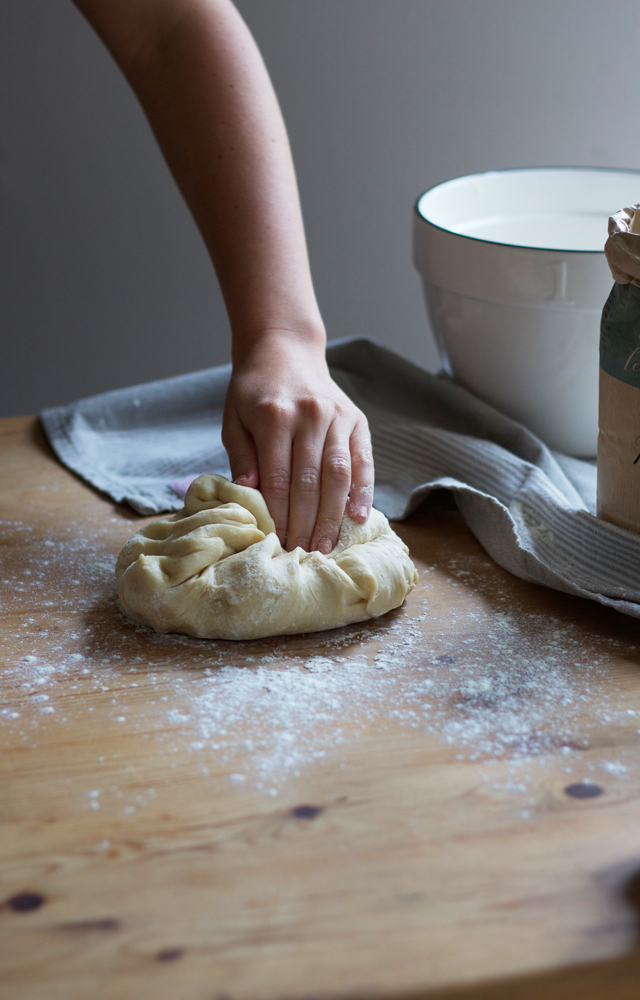 I’m not quite sure why, but up until recently, I’d always been too daunted by the idea of deep frying to have a go at making my own doughnuts. True, I’d dabbled in churro-making a couple of years ago (I can’t quite believe that was actually more than 2 years ago! WHERE IS THE TIME GOING?), but something about the idea of plunging bread dough into hot oil made me nervous. Not to mention the fact that I lose all self control around doughnuts, and can put away a frightening number in the shortest amount of time. I mean, I once at 8 Krispy Kremes in a day when I was at school.

In my defence I was 16, had the metabolism to match, and used to take about 15 hours of dance classes a week, but still. EIGHT. I had a three hour dance class that same evening, and remember feeling so sick and full of sugar I was certain I had Original Glaze seeping out of my pores. It most certainly wasn’t my finest hour. 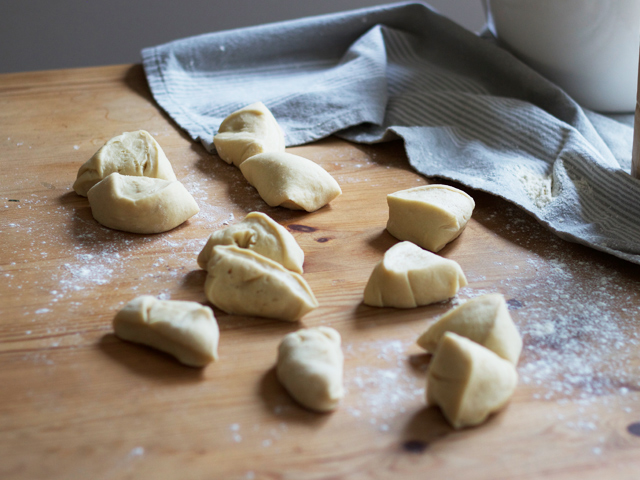 I like to think that now though, I’ve got a little more restraint than my 16 year old self. Doughnut consumption is limited to maybe two at most…though all bets are off if they come hot, fresh, dredged in sugar, and served in a paper bag from a fair or market. (Aren’t they always the best?)

Perhaps it still is best to eat them on a Monday, though. Why? Well, the promises I usually make myself on Monday mornings, about ‘hashtag clean eating’ and all that kind of jazz, help fortify my resolve and keep me from polishing off the entirety of the batch before Jason gets so much as a look in… 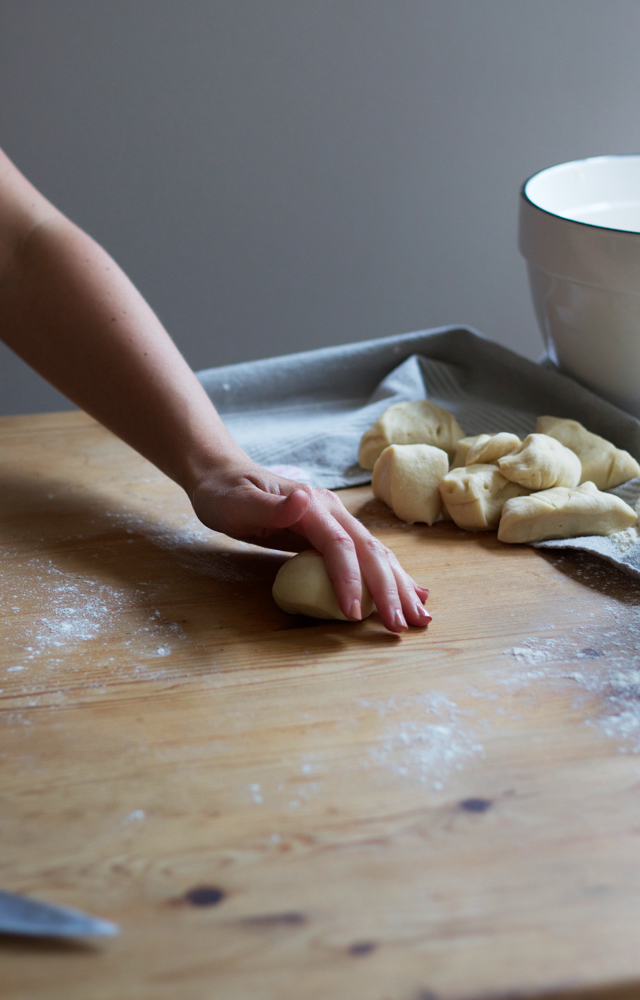 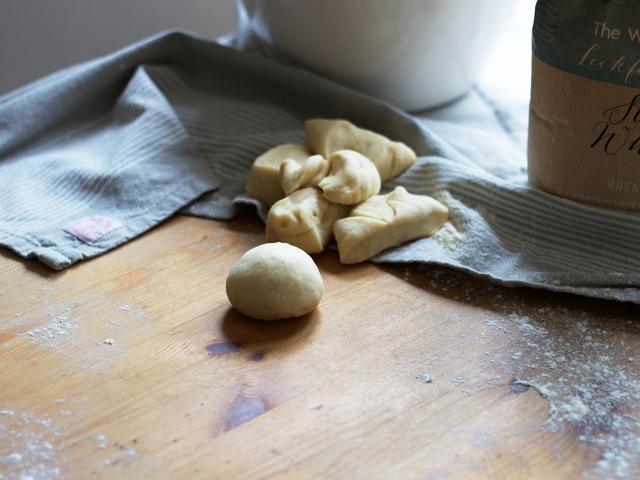 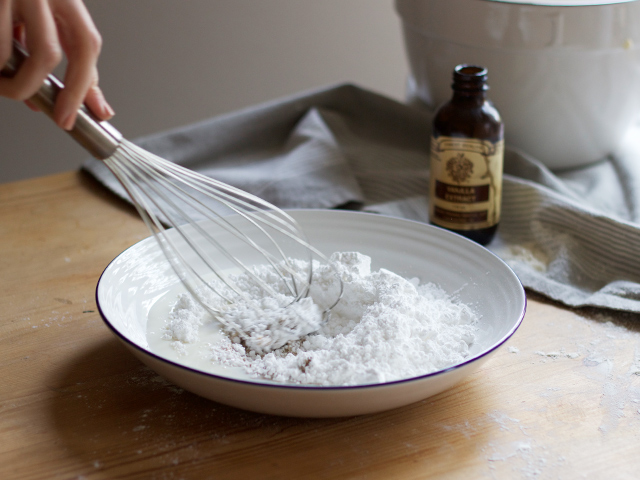 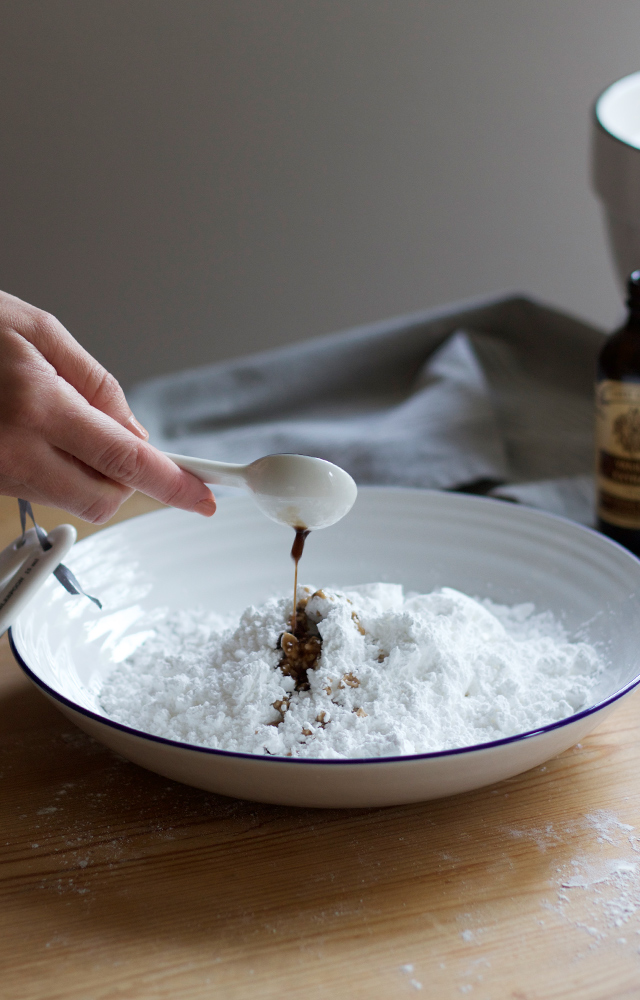 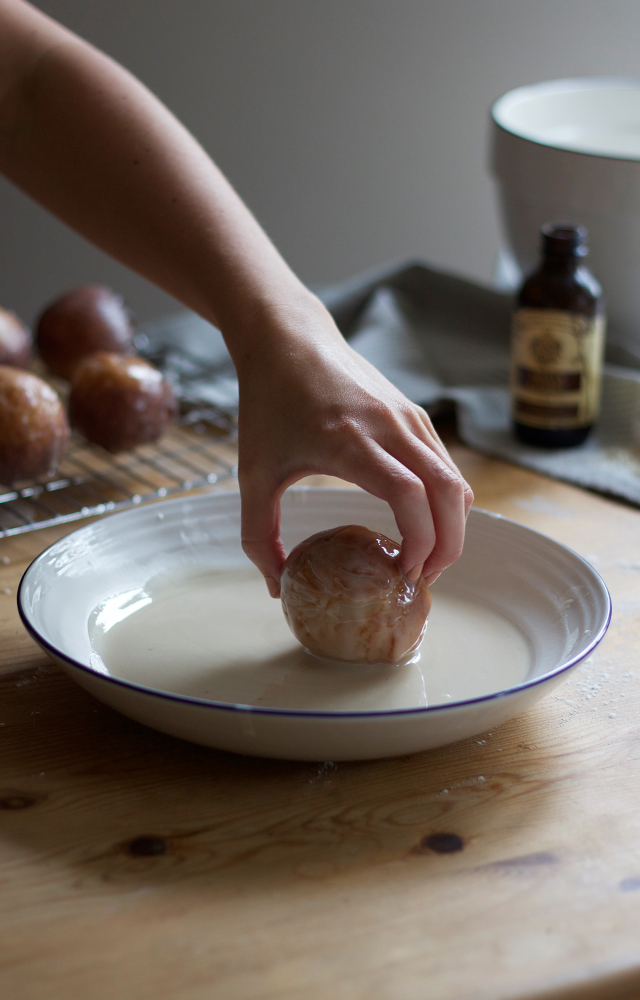 I found the base for this recipe whilst browsing through Paul Hollywood’s British Baking cookbook. In the book, he shares a recipe for ‘Isle of Wight Doughnuts’, which, so says Paul, contain a small handful of citrus peel and raisins in their centres instead of the usual jam or, indeed, a hole. But since if you ask me at least there’s no quicker way to ruin a baked good than by adding dried peel (I LOATHE the stuff), I’ve tinkered with the recipe just a little. You’re on board, right?

- Put the flour in a large bowl, then add the yeast to one side of the bowl, and the salt and sugar to the other. Add the butter and roughly two thirds of the milk to the centre of the bowl, then begin to slowly knead the mixture together.

- Add the remaining milk a little at a time, stopping as soon as a soft and slightly sticky dough has formed. Knead it for at least 5 minutes on a lightly floured surface, until the dough has smoothed out and is no longer sticky.

- Lightly oil the bowl, place the dough into it and cover over with cling film, then leave to rise until the dough has doubled in size (at least 1 hour).

- Gently knock back the dough, then divide it into 12 small pieces. Roll each piece into a smooth ball, then space evenly across two parchment paper-lined baking trays. Place each tray into a clean plastic bag or cover over with clingfilm, and leave to prove for 45 minutes.

- Heat 2 inches of vegetable oil in a large, heavy bottomed saucepan, and heat to a temperature of 185 degrees celsius. Fry the doughnuts in batches of two for 3 minutes per side, 6 minutes total.

- When cooked, allow to cool completely (if dipping in glaze) or for a minute or two if dredging in cinnamon sugar.

- For the glaze, simply whisk all the ingredients together in a shallow bowl, and then turn the doughnuts over in the glaze before allowing to drain on a wire rack. If you’d rather use sugar, mix cinnamon into caster sugar to taste, then roll the still warm doughnuts in the mixture until entirely coated, and set aside. 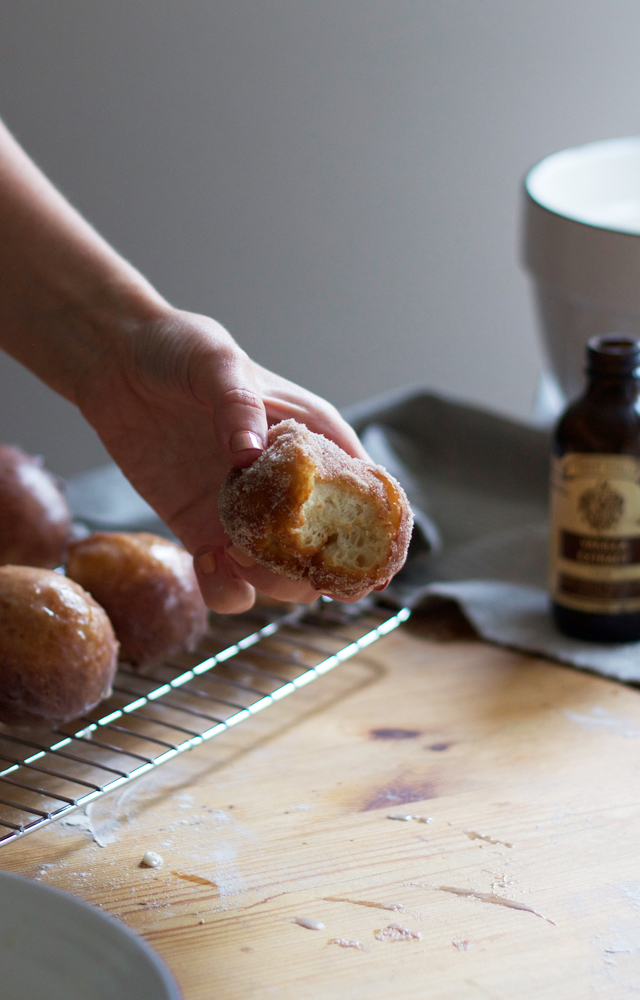 0 Comments
Posted in BAKING, FOOD, FROM MY HOME TO YOURS, RECIPE, SWEET
Read from the beginning >