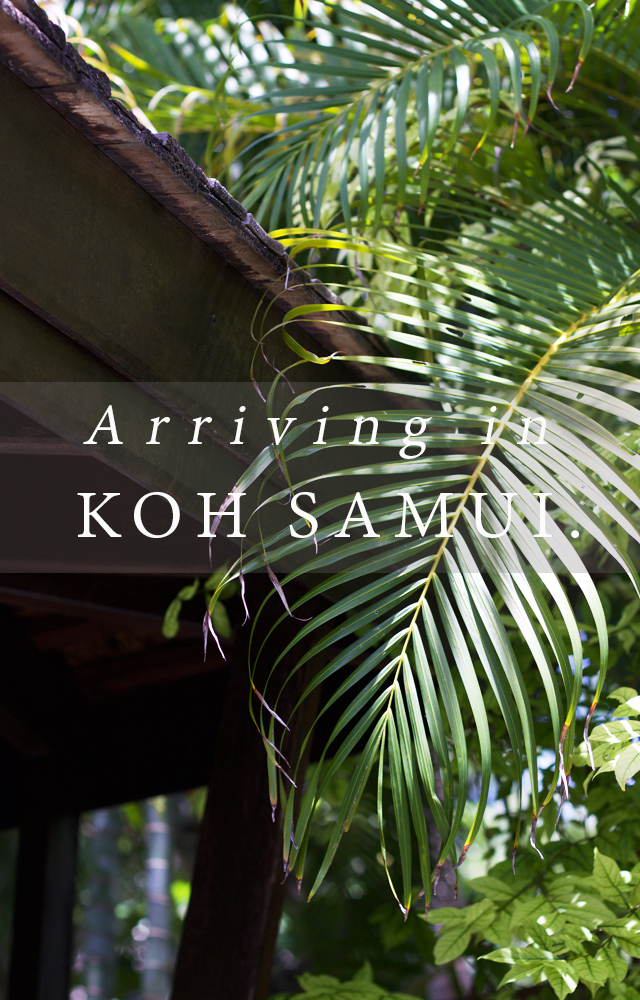 After the whirlwind day we’d had on the 17th, we needed a day to recoup before heading off on honeymoon. We spent the Saturday catching up with our nearest and dearest (who, ironically, we’d actually spent the least amount of time with at the wedding itself!), and, naturally, putting off the task of honeymoon packing until the very last minute. We also made the fatal error of leaving Jason’s car unattended around his brother and brother in law whilst we had a big family dinner at his Mum’s that evening, and so wound up drIving to the airport the following morning in a car covered in the sorts of graffiti that got us beeped at the whole way from home to Heathrow! ;)

I usually find flying pretty horrible (I’m nervous the whole time, and can’t ever seem to settle to sleep), but to be honest, after having had such a hectic few weeks leading up to the wedding, sitting down to a whole day of films and cat naps was actually pretty lovely!

The very first thing that hit us, when we arrived at our hotel in the North of Koh Samui mid-afternoon on the 20th, was the scent on the air.

The base note was, of course, the smell of the humid air itself. A layer of warm and spicy incense smoke made up the heart, and then, finally, a layer of frangipani that was carried towards us on a breeze sent up from the sea. I’ve never been anywhere in my life where the air smelled so beautiful- if I could’ve bottled it, I would have.

We chose the Melati Spa Resort in Tongson Bay as our honeymooning spot because we’d hoped it’d be peaceful and relaxing- something of a retreat after such a busy few months of planning. And you know what? It hit the mark on every level. The grounds of the hotel were vast- thick with palm and banana trees, orchids, frangipani trees, and bird of paradise plants. A maze of pathways cut through the jungly gardens, paths I found so very confusing and difficult to navigate I honestly didn’t manage to get from our villa to the restaurant at the very top of the grounds without getting lost once the whole time we were there.

The villas all are totally self-contained and secluded, so much so that we didn’t see another soul (aside from the staff) that first day until we finally made it to the restaurant in the evening. Saying that though, the quiet might’ve had something to do with the colossal storm that hit shortly before the sun set! I’ve never known storms like the ones we saw in Thailand. In the space of 20 minutes or so the wind would go from non-existent to being strong enough to set the palm trees waving and bending and swaying, then the sky would grow dark and moody and the humidity would reach breaking point, and finally, all of a sudden the heavens would open and raindrops bigger than any I’ve seen before would begin to fall fast and hard. We loved those nighttime storms, with their huge flashes of lightning and colossal claps of thunder, even more than the warm, balmy evenings.

We spent our first night in the hotel watching the storm from the traditional Thai restaurant right at the top of the grounds, whilst eating a veritable feast of some of the most incredible food I’ve ever had in my life. I know we ate maybe 8 dishes between us (all light and fresh and delicious), but the green curry with vegetables and fried silken tofu was *so* fantastic, all the others paled in comparison! I couldn’t even begin to explain what the flavour of the broth was, it was so complex. Sweet and tangy and creamy and warm all at once, with little rounds of tofu so soft they melted away as soon as they hit your tongue. I could’ve eaten that curry every single day without getting tired, it really was *that* good! 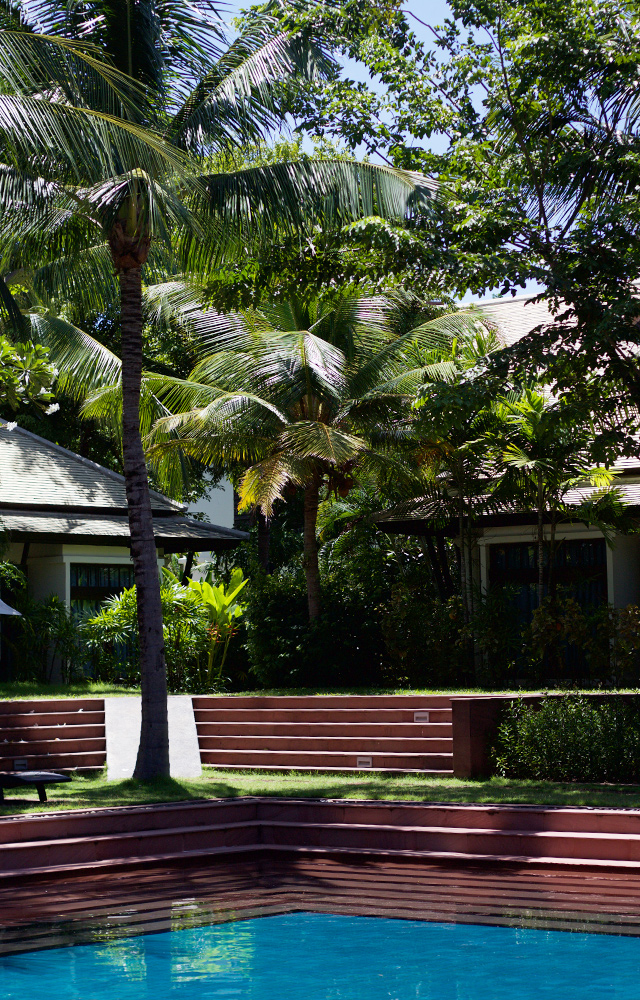 The days we spent at the hotel were as happily lazy as you’d imagine. We’d alternate between basking like lizards in the sun (either on the beach or by the peaceful, adults-only Sanctuary pool our room backed onto) whilst burning through our books at a rate of knots. And I do mean quite literally burning, since the sun was so very hot the binding glue on the copy of The Buried Giant by Kazuo Ishiguro I was reading actually melted!

Our basking and napping and reading routine was punctuated with visits to the restaurant down on the beachfront, for both breakfast and lunch. We made it our mission to sample as much of the drinks menu as we could during the trip, not only in the name of hydration but also because every single one we tried was so outstanding, it seemed a shame not to taste the lot! Below is a banana, mango and yoghurt smoothie (my favourite!), and a lemon iced tea with sugar syrup that could be added to taste.

Special mention too must go to the fresh young coconuts that were available to order, served with both a straw for drinking the water, and a spoon for scooping out the creamy fresh. As a girl (should I say woman, now that I’m a wife and all? ;) who poured a the entirety of the first and last carton of VitaCoco coconut water she bought down the sink after taking and hating one single sip, the fresh stuff has me totally and completely converted! 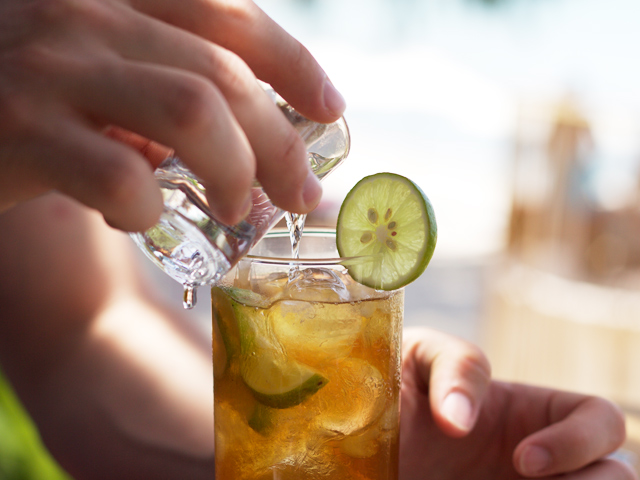 ^^ Completely obsessed with red vegetable curries- the spicier the better! ^^ 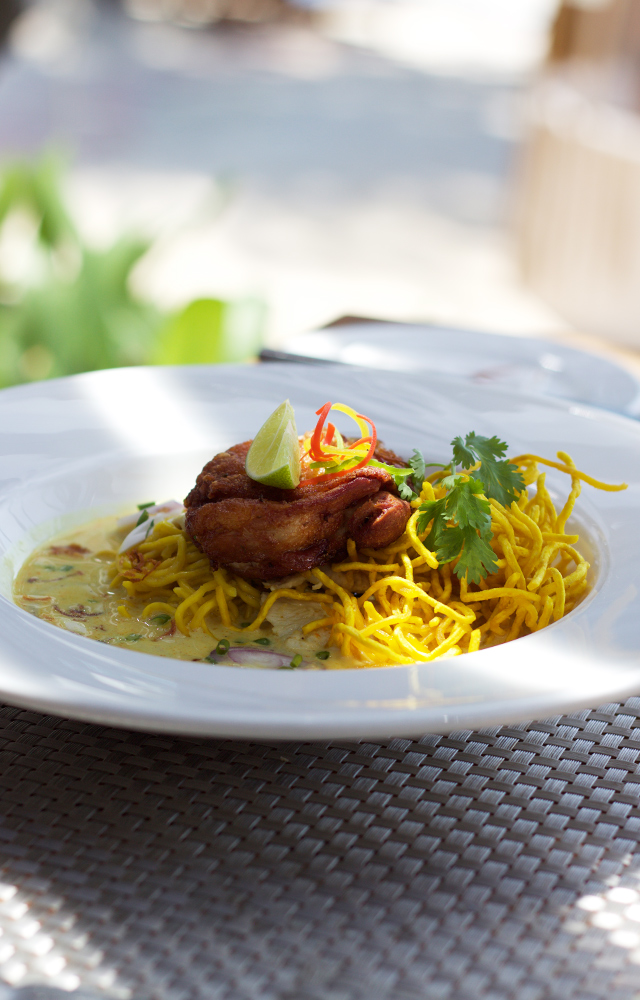 At the end of each of those first few lazy days, we’d potter back our room and I’d beeline straight for the outdoor shower, set in a tiny courtyard off the back of the bathroom and lined with tall banana palms. It was the very best place to rinse each day’s quota of salt and chlorine from my hair, all whilst pretending to be in one of those Herbel Essences ads of a few years ago ;) (anyone else remember?!)

There’s so much more I want to share with you from the trip (from our travels around the island, and the beautiful sights we saw along the way), but since I already feel as though this post will come out a mile long, we’ll regroup in a day or so… 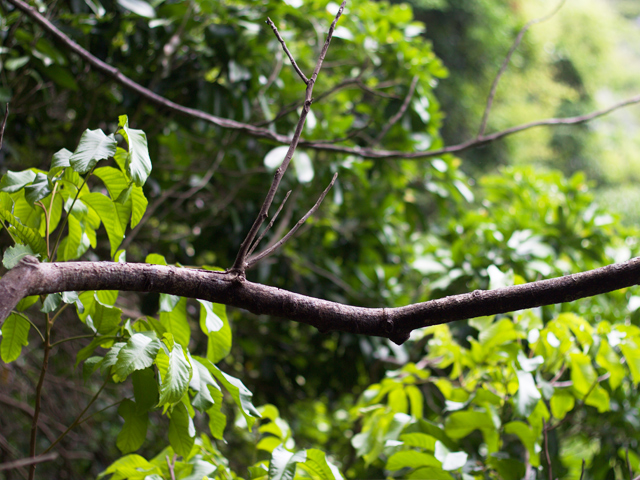