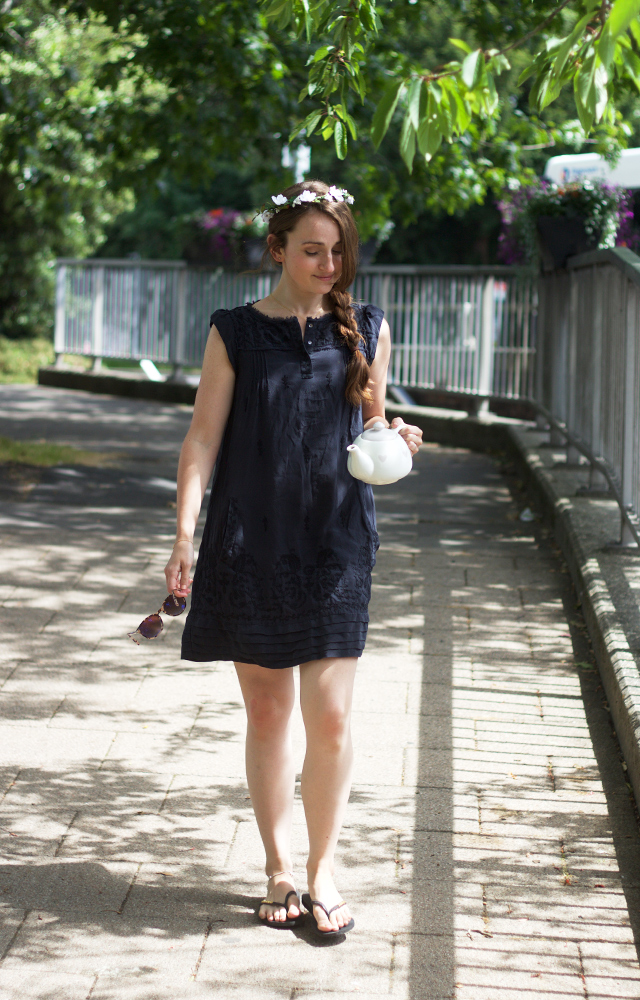 And so the wedding celebrations begin! {p.s. The teapot contained ice for a picnic. I’ve not taken to carrying one around just on the off chance I might fancy a cuppa…}

I remember my early teenage years as being pretty much an endless series of sleepovers. My best friends and I would spend our weekends and holidays hopping between each other’s houses (or rather, being taxi-ed around by our long suffering parents), taking nothing with us but a toothbrush because we knew we’d all wind up raiding one another’s wardrobes anyway. We’d stay up into the early hours of the night talking about everything from boys to whatever gossip was hottest at school to our art GCSE projects, and our days were filled with nonsense like dressing up in the silliest outfits we could concoct (then taking 1001 photos, of course), eating ourselves stupid, and maybe (if we’d manage to wangle it with our parents), heading out to a party armed with a four pack of alcopops to share between us. It was bliss.

And so it turns out, when your best friend organises for you a three day hen weekend sleepover (a bachelorette, for my American readers!) that encompasses everything you loved most about those carefree teenage days, you’re in for a pretty special time! 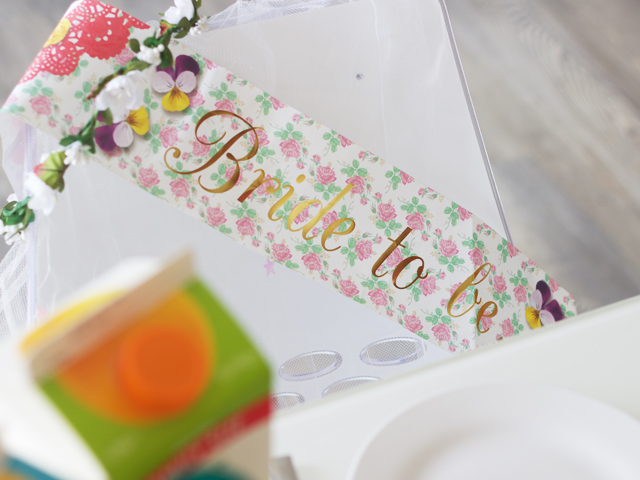 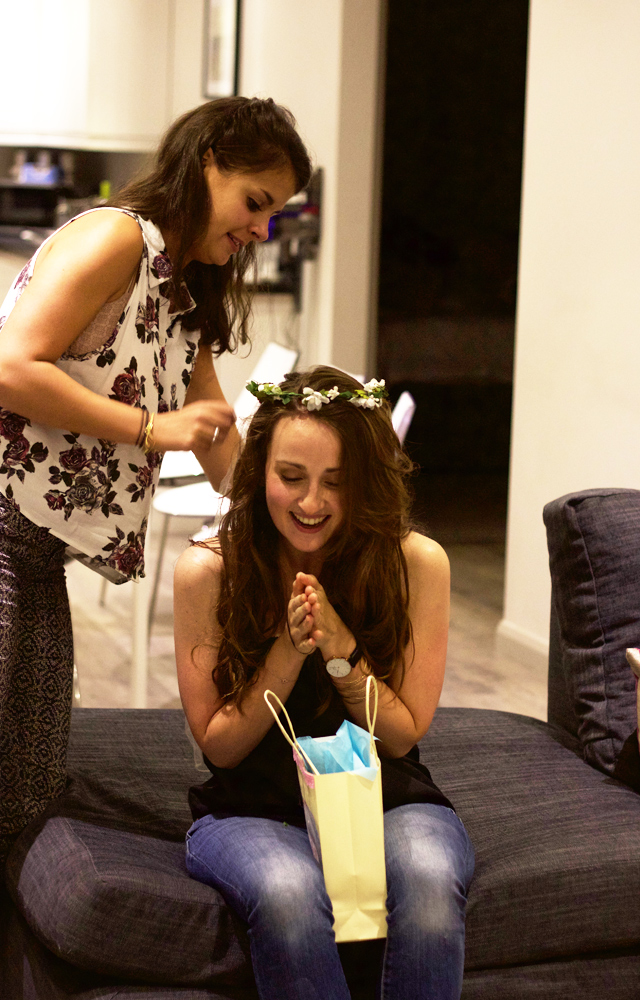 All I knew about my hen party was that we were heading down to Chichester on Friday evening, and that we’d spend two nights staying in a little country cottage before heading up to my Mum’s for afternoon tea on the Sunday. My cousin Sophie picked me up a little before 7 after work on Friday, and after getting ourselves so badly lost on the drive that we actually went through the Hindhead tunnel twice and made a brief accidental detour into a caravan park, we finally arrived at Flintstones cottage! We (my sisters-in-law-to-be Nat and Clare, maid of honour Jo, cousin Sophie, and soul sisters Tania and Freya) polished off a few rounds of fajitas, and then got to the main event of the evening. Tequila!

Now, you’ll know that I’m not the biggest fan of alcohol. Sure, I’m happy to indulge in the odd glass of wine or cocktail, but anything beyond that? I’m out. In fact, I’m such a notorious lightweight that Jo came armed with ample suppliers of painkillers (for headaches) and lemonade (for watering down my drinks!)! But do you know what? I’ve finally found my calling- I can handle tequila like a trooper! Salt – tequila – lemon…and not even a shudder! I hope you’re suitably impressed ;) 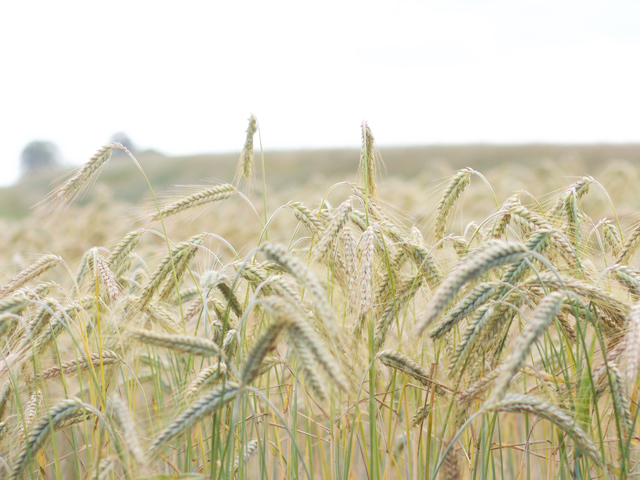 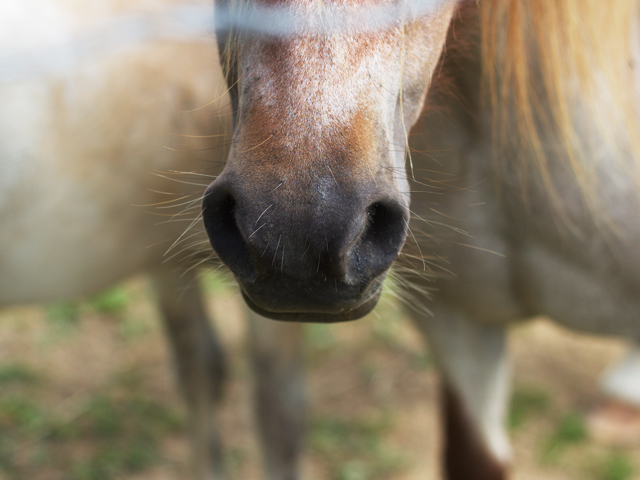 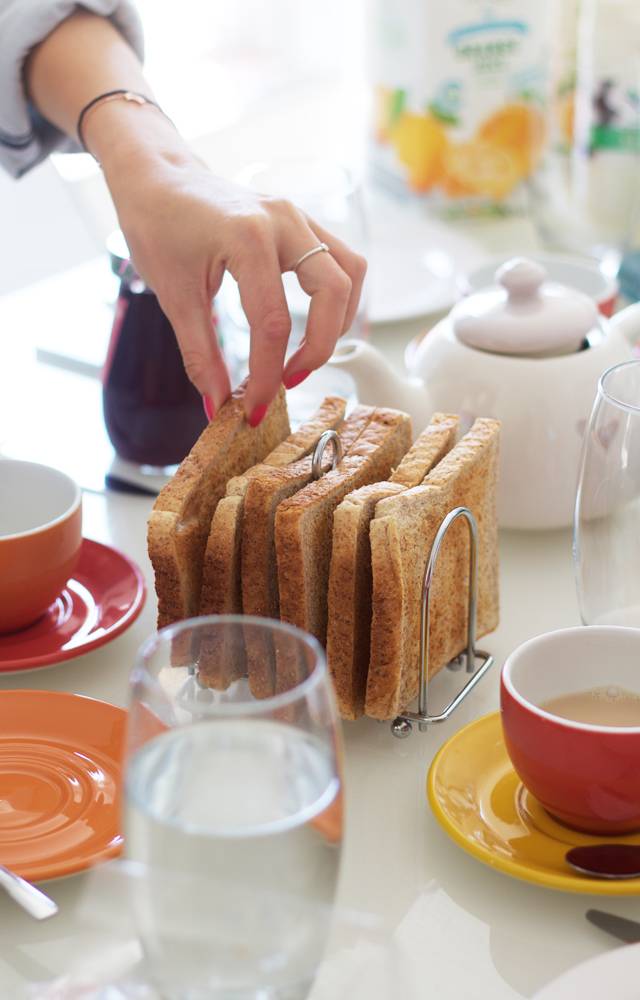 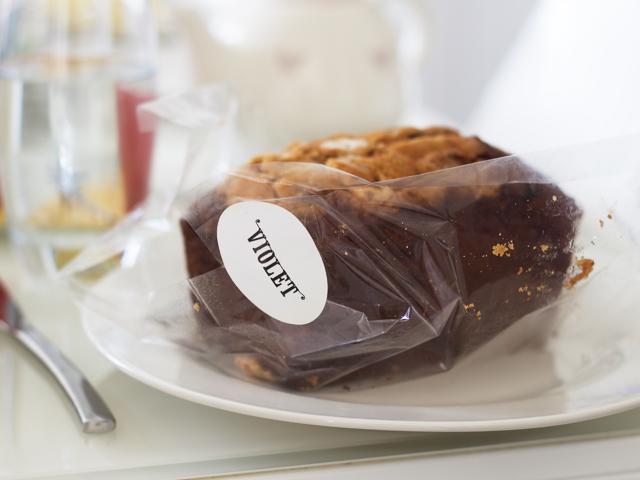 We woke up on Saturday morning feeling surprisingly sprightly (after such a late evening of games and silliness the night before!), and even managed to sneak down to visit the ponies and have a wander around the wheat fields before settling in to breakfast.

After a few rounds of toast and croissants, the girls and I suited up in workout gear (Jo requested we all bring with us ‘something we could move in’- intriguing!) and then proceeded to spend the rest of the morning in a state of hysteria. You see, Jo had arranged for a dance teacher called Sarah to come and teach us a routine to ‘Work It’ (a song I once choreographed a dance to for an assembly at our very-Catholic-indeed senior school, not realising that the lyrics are out of this world inappropriate!;), and it was seriously the most brilliantly fun way to spend a morning! Sarah was the sweetest, and we wound up with aching bellies from laughing so hard! Since there’s not a single person on earth who looks attractive whilst photographed midway through performing the running man I’ll save you from the photos, but just know that making up dance routines is most definitely just as fun at 24 as it was at 14!

After giving the performance of our lives for the various people who pottered past our cottage whilst we did one last rendition of our dance routine (they loved it, I could tell), we made a quick change from leggings to dresses, armed ourselves with picnic hampers, and headed off to Priory Park in Chichester. 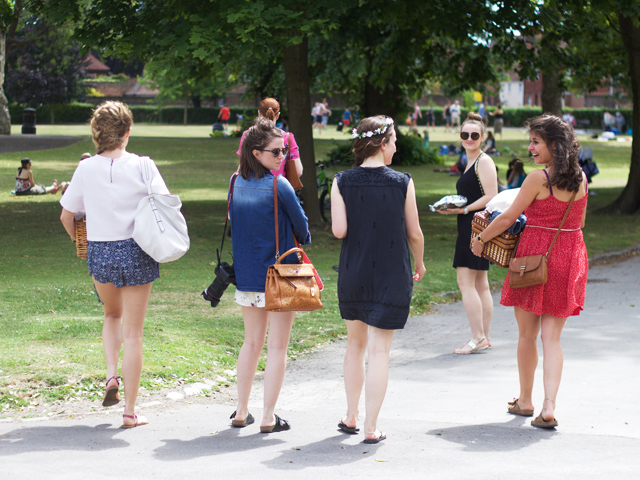 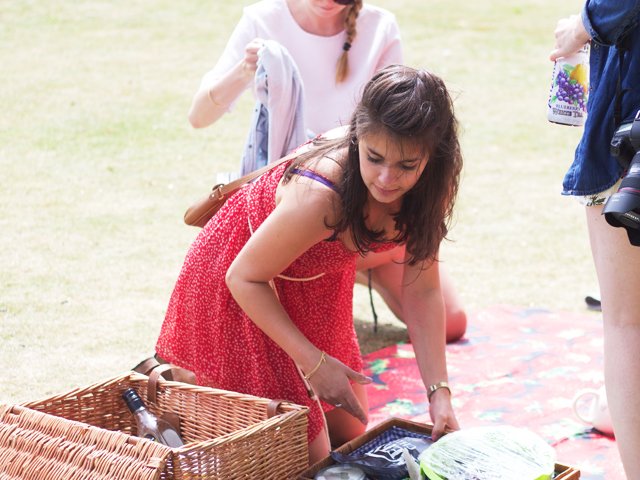 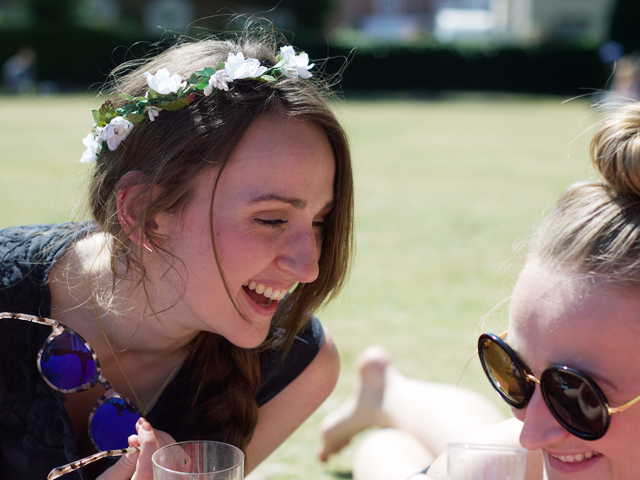 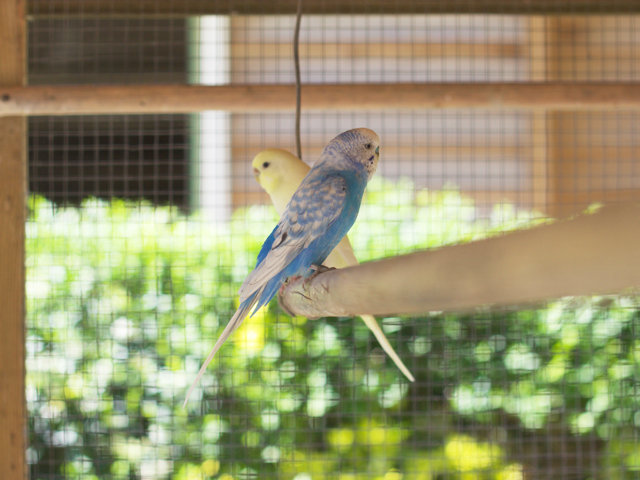 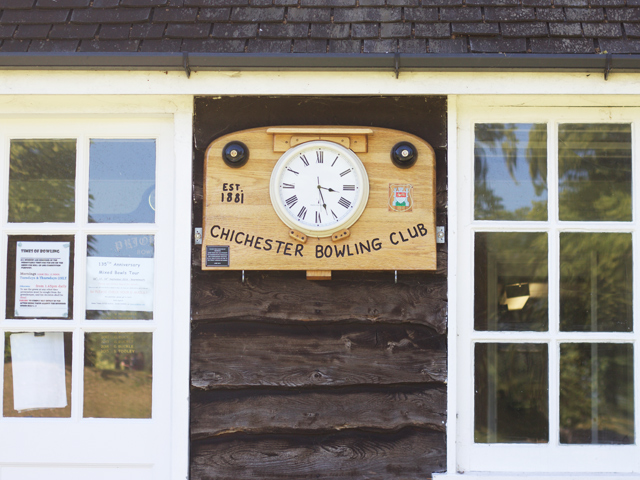 Priory Park was beautiful- I’d never visited Chichester before this weekend, and now can’t think why not! After demolishing our picnic (roast chicken, salads, quiche…champagne. You know, the usual Saturday afternoon picnic routine!) we went for a potter around the town centre, and into a vintage and antique fair that tested every ounce of will power I have not to walk away with armfuls of vintage dresses and recovered Scandinavian enamelware. Be still my heart. 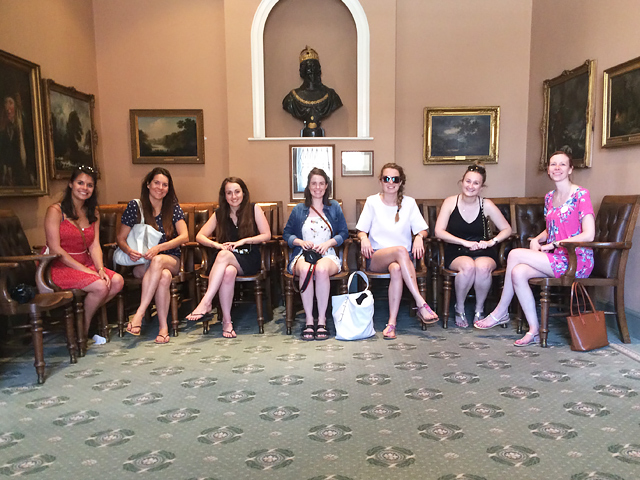 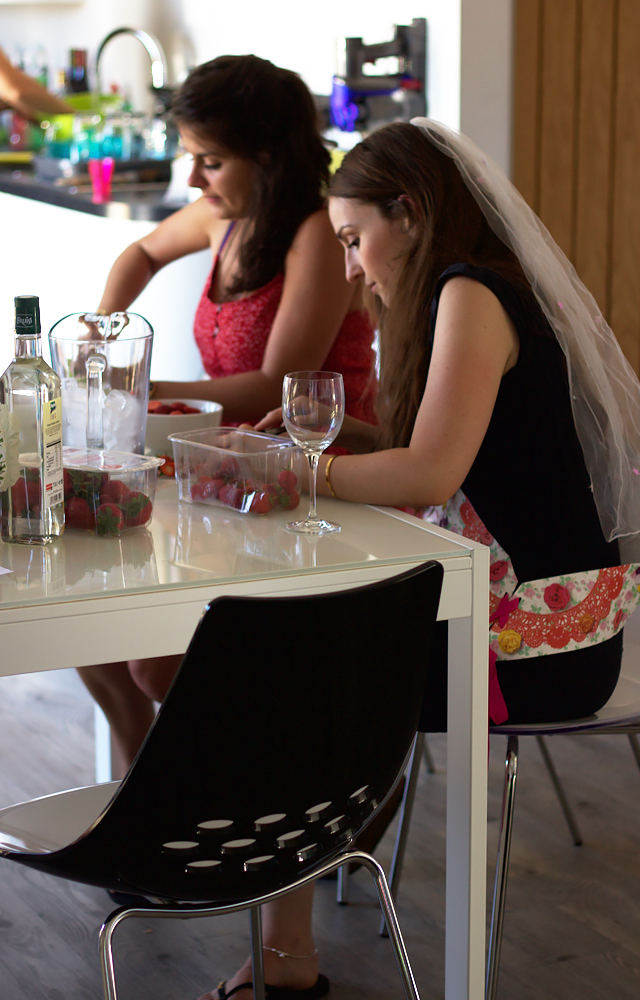 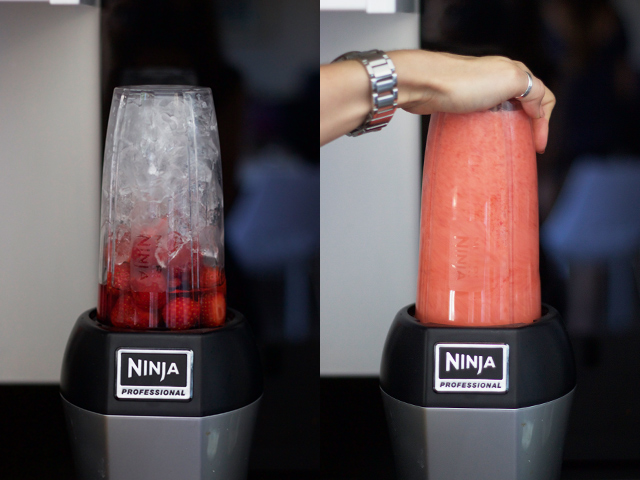 ^^ Next stop- cocktail o’clock back at the cottage! ^^

Strawberry daiquiris and mojitos were on the menu for the afternoon, so we set about crushing ice and muddling limes with mint and sugar and adding liberal amounts of rum to strawberries. And we made some good’uns! 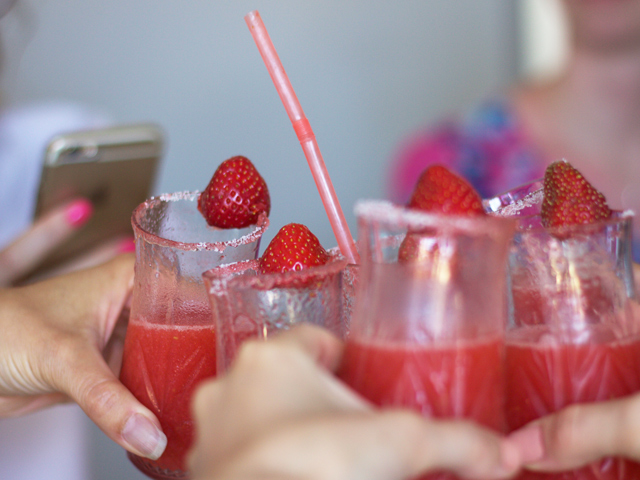 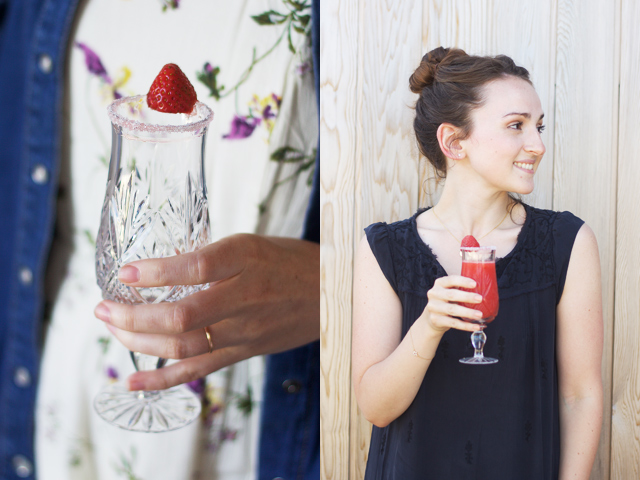 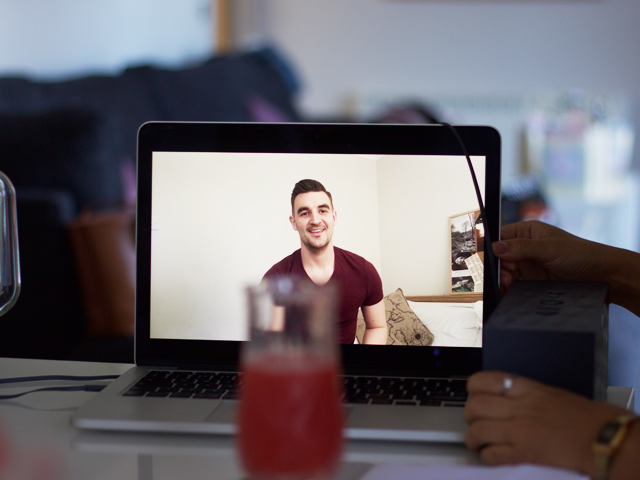 The final surprise of the day was to come via Jo’s laptop. We settled round the dining table to play the Mr and Mrs game, but instead of it being just a regular set of Qs and As, Jo had asked Jason to record himself asking me the questions and then sharing the correct answer instead! It wound up being a pretty emotional afternoon- the ‘what did I say when I asked you to marry me’ question resulted in all 7 of us getting just a *touch* teary-eyed! And when I say a ‘touch’, I mean that *some* of us had to leave the table to go and get supplies of tissues…Clare ;) Can you even imagine how we’ll all be at the wedding?!

The evenings were maybe my favourite part of the weekend. We stayed up late both nights, but on the Saturday evening we stayed bundled up on the sofa talking until almost 3am. Spending quality time with some of my favourite people in the whole world, laughing and drinking tea and snaffling biscuits and putting the world to rights- it did my heart good! In fact, I honestly can’t remember when I last laughed as much as I did this weekend!