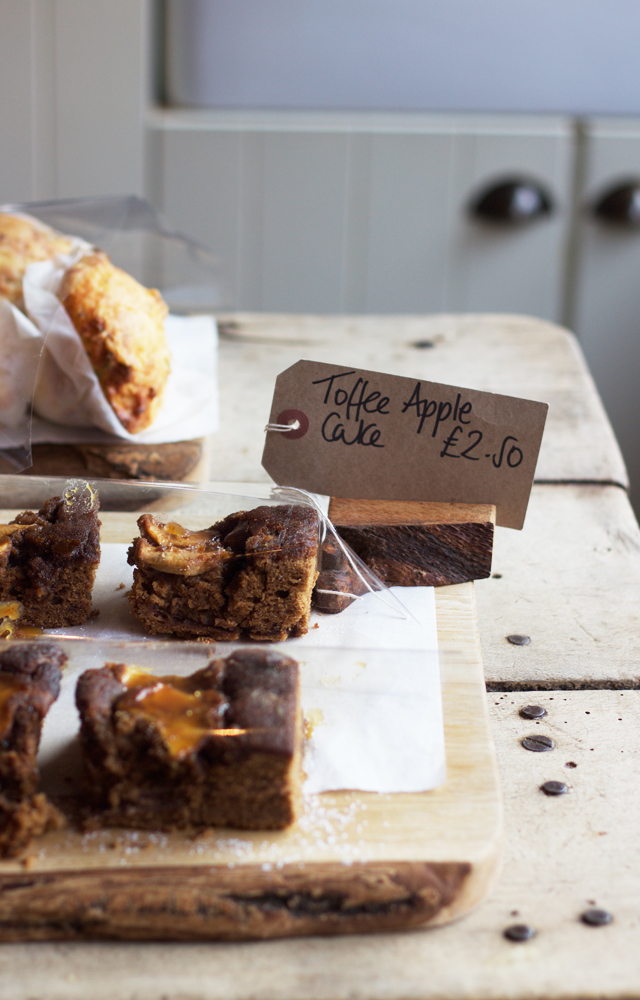 Since our route back home from Yorkshire last weekend skirted us round the outside of York, we decided to take the opportunity to head into the city. When we arrived I asked for recommendations on Twitter for where we should go to eat, drink, and sightsee, and immediately started making an agenda based on all the suggestions. A tour of the cathedral! Lunch at The Star! And Betty’s Betty’s Betty’s!

Turns out though, my plans were to be thwarted by time. We couldn’t really spend any longer than two or three hours in the city without getting caught in the mad end of Bank Holiday traffic, and also only had enough change on us to feed the meter to the tune of a couple of short hours.

With our time restraints in mind, we got moving… 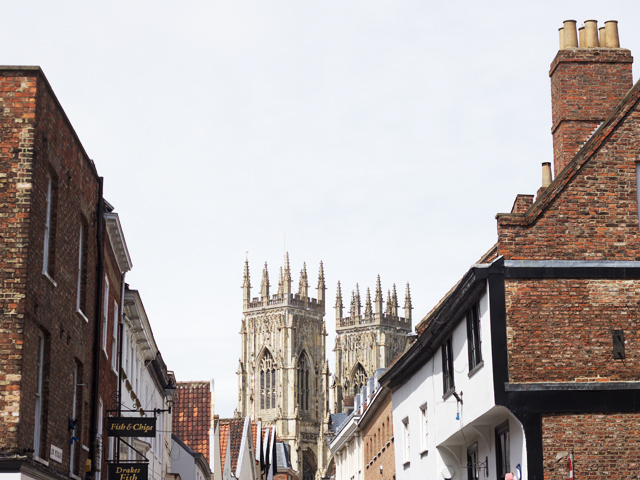 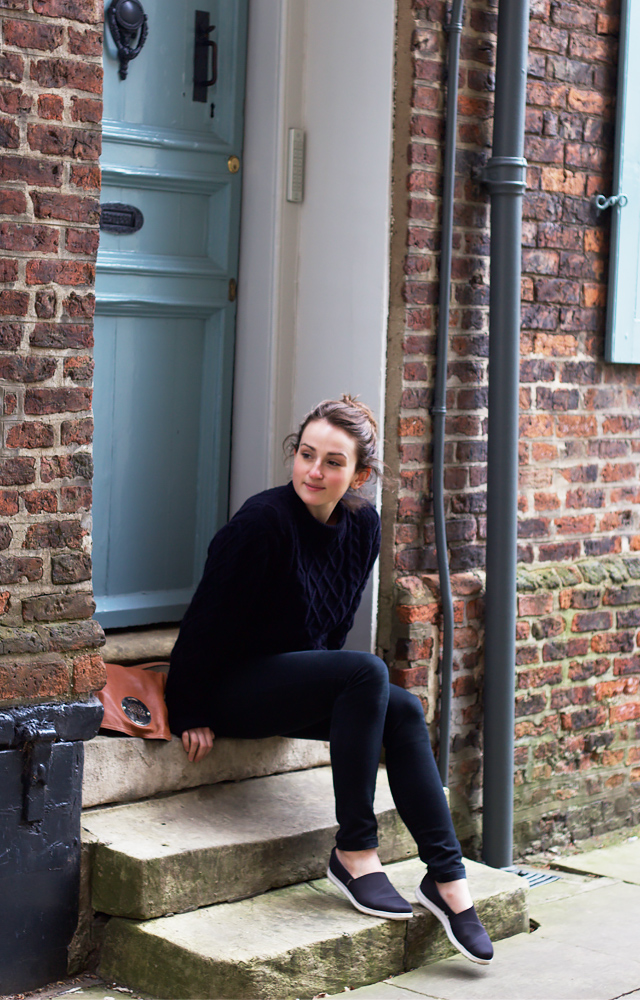 York turned out to be even more adorable than I’d imagined- full of narrow, cobbled lanes and leaning buildings and tiny, beautifully-dressed shopfronts. The cathedral above doesn’t even look real, does it?

We wandered through the Shambles, quickly gave up trying to compete for photo-taking space with every other tourist in York that day, and then headed out in the direction of Betty’s. Betty’s is, as it turns out, the most famous tearoom and bakery in the North of England. I’d only heard of it once before via my lovely friend Kat, but when we said we’d be in York for the day, countless people recommended we go! Sara (another Y.shire-based blogger friend!) had mentioned that the queue for Betty’s might be long, and I’ll admit scoffed at the idea initially. A queue? To get into a bakery? Do me a favour, was precisely what I thought to myself.

HA. How wrong I was! By the time we got there, the queue was right out of the door and wrapped round the first corner of the building! It must be *seriously* good cake! With such a short time in the city, we decided to pass up the experience and turned to Twitter for a recommendation of where else to go instead. 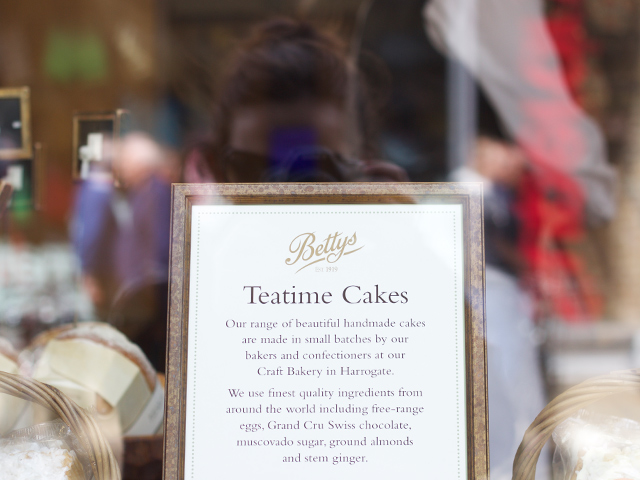 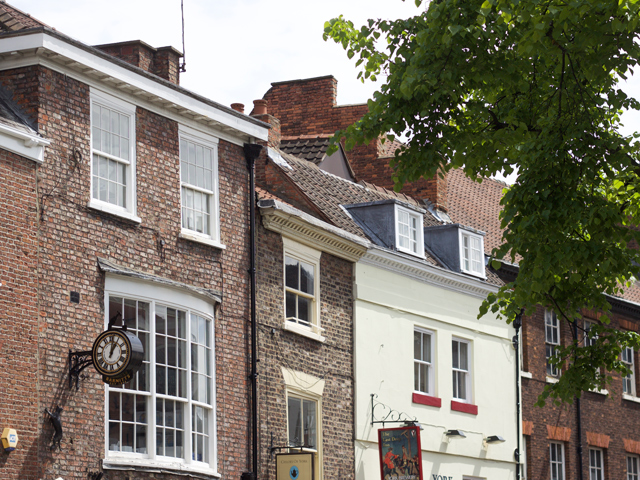 To the rescue came Becky, blogger behind the beautiful Poppy and Pickle! She recommended that we head to a cafe called Brew + Brownie, promising that they serve really great coffee and cake. And you know what? She couldn’t have been more right!

Brew + Brownie was a total photographer’s dream- beautiful filament lightbulbs and natural wood surfaces everywhere, with the counter covered in rows of the most tempting cakes imaginable. It was pretty busy, but we managed to nab a couple of seats at the bar. Good job too, because the hanger was setting in *fast* ;) The menu was pretty simple (whopper sandwiches, toasties, all-day pancakes, and just one lone salad thrown in for good measure), and everything looked so tempting we easily could’ve ordered one of everything and been done with it. In the end though, Jason chose the pulled pork ciabatta, whilst I went for a toasted brie and bacon sandwich that turned out to be the very best decision I’d made all weekend. 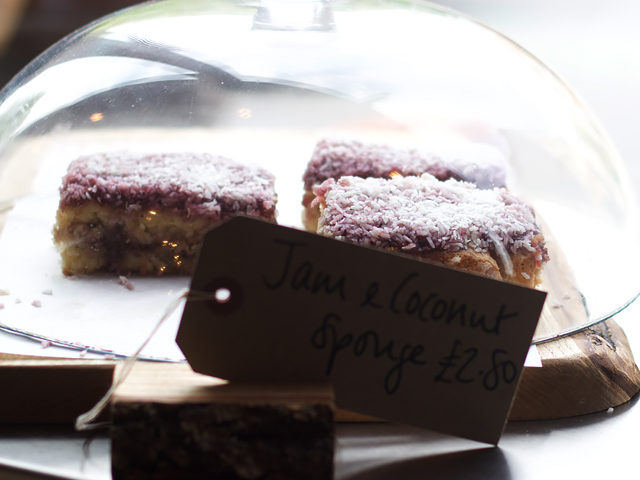 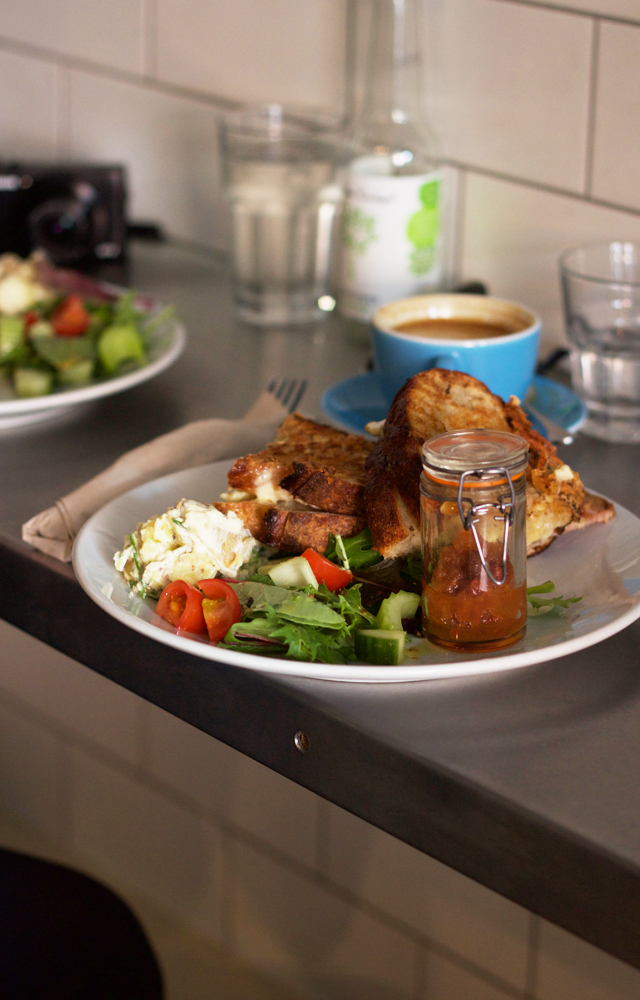 I mean, just *look* at it. Have you ever seen a more beautiful sandwich in all your life? The brie was toasted to perfection (soft and oozy!), the bacon was thick cut and delicious, and the bread? Oh, that bread. Sourdough, crisp on the outside and soft within, with plenty of little golden cheesy crunchy bits clinging to the crust. As a rule I try not to eat wheat too often (meaning that I’ll pass up heavy, twice-weekly bowls of pasta in favour of a once a fortnight burger or pizza blow out ;), and so having a toasted sandwich like that was a total treat.

If picking out that sandwich from the menu was the best decision I made all weekend, the next best was only eating 2/3rds of it, so that I could save space for a slice of the toffee apple cake. Because I’m being serious now, that cake might be the best of its kind I’ve ever had. Rich and cinnamony, peppered with slices of soft cooked apple, and a layer of sticky, treacly toffee sauce on top. I ate it halfway down the M1 during our drive home back down to Surrey, with my feet up on the dashboard and an expression of total bliss on my face. I did share the slice with Jason and am not at all ashamed to say that the sharing was somewhat begrudging, because a cake that good is bound to bring out someone’s selfish side. Right? 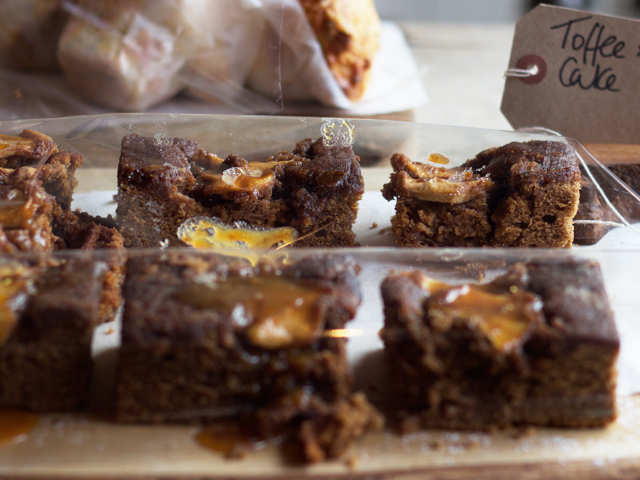 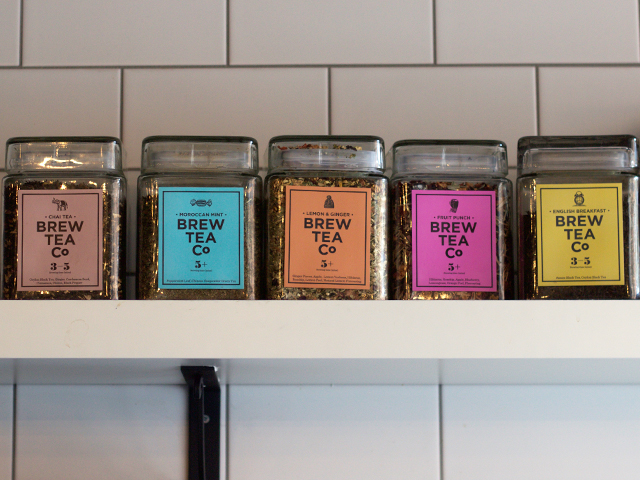 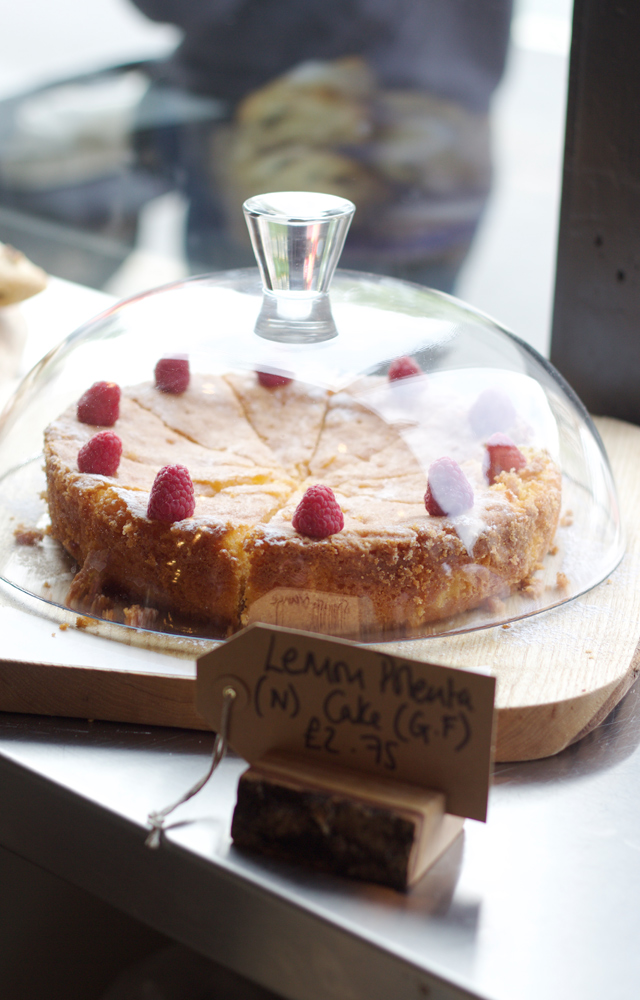 So really, with cake that divine, who needs Betty’s? Okay okay, I do, but I’m determined to head back North sometime soon and stick it out in the queue for a table!

And that, as they say, was that! Whistlestop three-day tour of Yorkshire? Done!

P.s. I just shared a video from our trip on my YouTube channel! Click through to have a nosy! It contains the words ‘oh my god the wedding’s off’, just FYI ;)