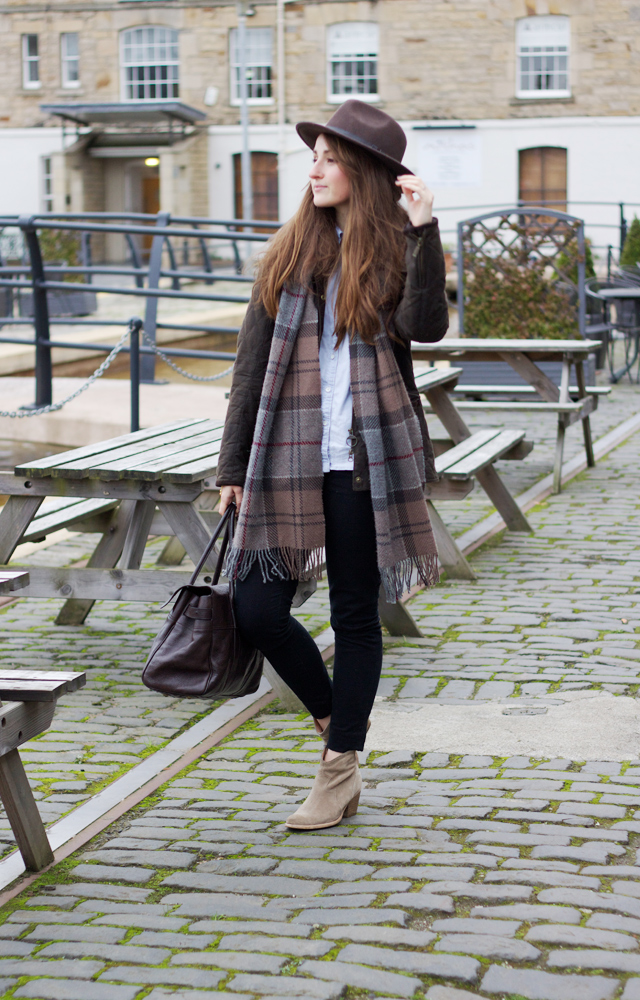 The past week was such an exciting one, I don’t really know where to begin in relaying it all! But I suppose that since the beginning’s always a sure-fire bet, we’ll begin there…

J Barbour & Sons was founded some 120 years ago this year by a man (and visionary!) named John Barbour, and the company has been handed down through the generations ever since. In celebration of this being a landmark year for the company (as well as Barbour’s beautiful collection of tartans and their incredible heritage), myself, the darling Jen from J for Jen, and a fair few journalists from international press teams were invited up to Scotland and Newcastle for a few day’s break. I flew up from Heathrow to Edinburgh (during those ‘we’re in the tail-end of a hurricane, brace yourselves!’ weather warnings, and with enough turbulence to make even the most seasoned traveller a little green around the gills!), and arrived at Prestonfield House in serious need of a little time and space to decompress. And oh my, did I find it. 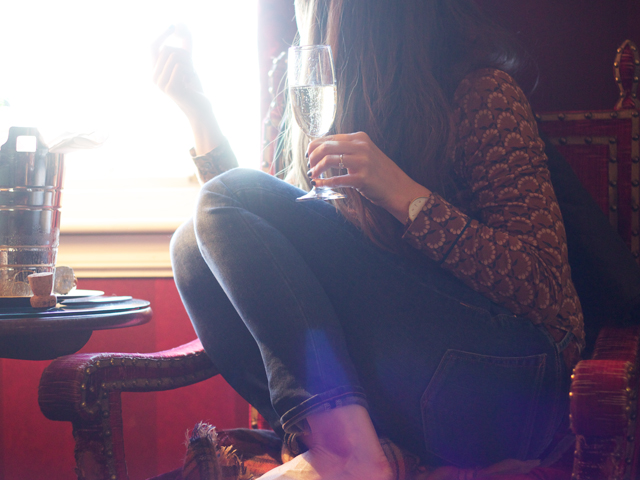 Prestonfield is without doubt the most beautiful hotel I’ve ever been in! It’s all plush carpets, beds so large you could lose yourself in them, velvet curtains, tall sash windows, and long portrait-lined corridors. The sort of place where nothing’s too much trouble for the staff, and you wind up wishing that you could move in to one of the rooms and live there forever. Right after I’d settled in and unpacked, I sat down by the window and ate little white chocolate truffles alongside a glass of bubbles, whilst admiring the view of Arthur’s Seat out my bedroom window. A ‘pinch me’ moment, if ever there was one! 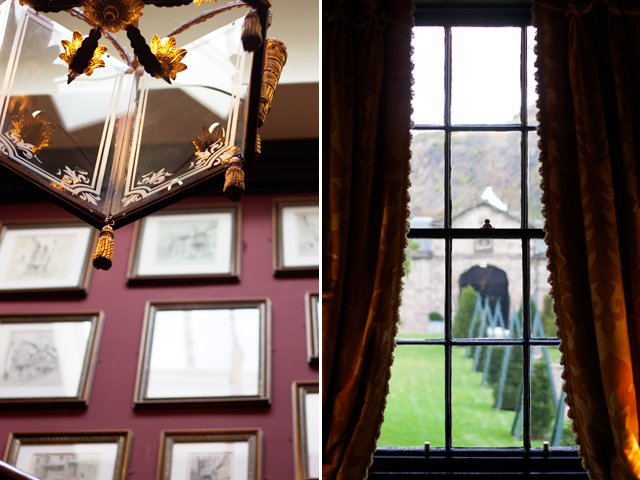 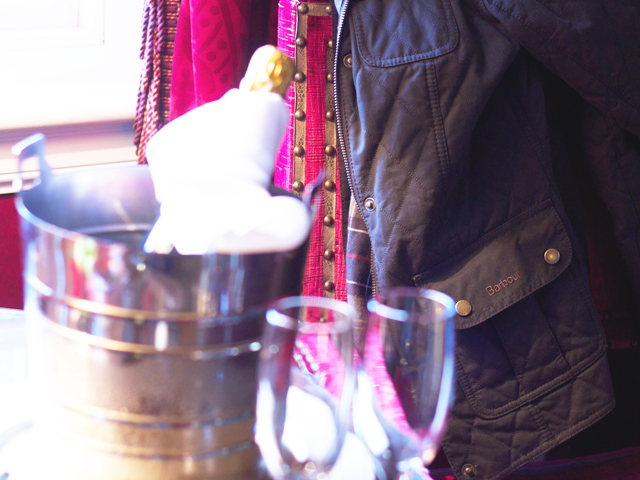 After spending approximately 8 and a half hours attempting to comb out the knots in my hair (again, thank you mini-hurricane), I headed down to a formal dinner hosted by Dame Margaret Barbour. Before dinner, we got to see a mini preview of Barbour’s S/S15 collection (all muted shades, lightweight fabrics and soft tartans, so beautiful!) and were talked through both that and the current season’s collection by the head of men’s and ladieswear respectively. Dinner itself was just wonderful. We ate ‘neeps and tatties’, haggis (which was so delicious, and was even ‘addressed’ in traditional Scottish style!), marmalade puddings, and sweet chunks of Scottish tablet. Toasts were given, glasses were raised, bagpipes were played Robbie Burns poetry was recited, and Auld Lang Syne was sung. I didn’t take many photos (I was too busy pretending to know the words to Auld Lang Syne ;) so you’ll have to trust when I tell you what a beautiful evening it was! There are one or two snapshots over on my Twitter feed, so click through for elegant place settings and table centres and whatnot… 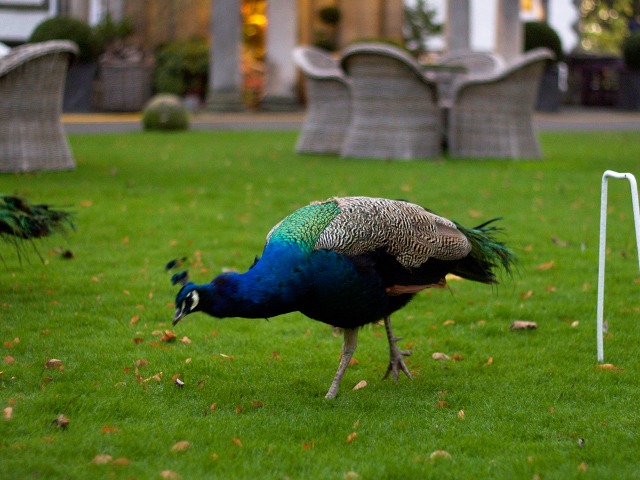 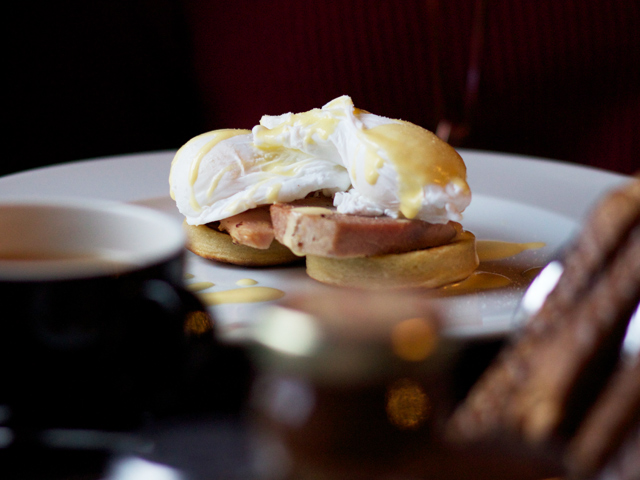 The following day, after a breakfast which featured a roughly 2:1 coffee to food ratio (just how I like it), we gathered up our suitcases and bags and headed out in the direction of Leith, for a trip to tartan specialist company Kinloch Anderson. Now, I hadn’t realised quite what a serious business tartan is until last week’s trip! Barbour (both the family and the company) has roots in Galloway in Scotland but has been located for most of its life in South Shields, so when they found themselves in need of their own signature ‘Barbour tartan’, they called in the experts. Kinloch Anderson are a sixth generation family business, who specialise in creating tartans, kilts and Highland dress, and a whole range of beautiful tartan products. It was Douglas Anderson who designed the beautiful signature olive green Barbour tartan, which is used to line so many of the waxed jackets.

The story behind the tartan is a beautiful one. Helen Barbour (Dame Margaret’s daughter), had been doing some research into her family’s heritage, and discovered that neither they or the company itself had its own tartan. Up until Helen’s lifetime, Barbour jackets were lined with widely available tartans like ‘Black Watch’, which made them easy to replicate and prone to (poor) imitation. Kinloch Anderson designed a new, totally original tartan for Barbour at Helen and Dame Margaret’s request, which is based upon the Ayrshire district tartan (the district from which John Barbour came) and has an earthy colour palette to echo the company’s countryside roots.

What I think is most beautiful though is that not only is the tartan registered to the company, but it’s the Barbour family’s own tartan too. And so because of this, in wearing our tartan-lined Barbour waxed jackets and those soft woollen tartan scarves we borrow from our parents and never give back, we become a part of Barbour family heritage. The idea captured my heart, and reminded me for the umpteenth time during the week what an incredibly powerful thing family is. 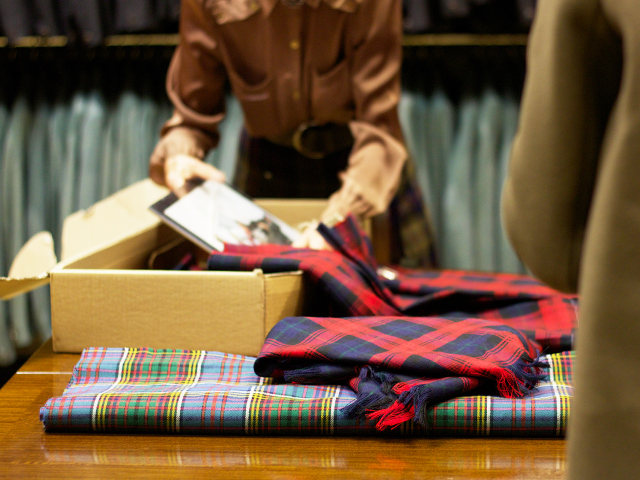 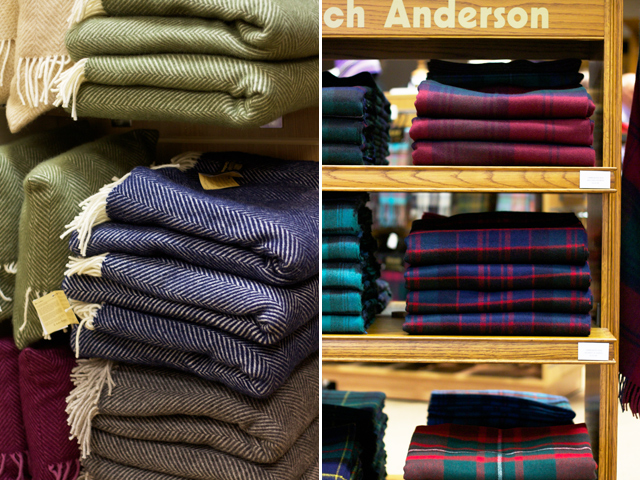 ^^ Aren’t those herringbone wool blankets to die for? If I’d had space to get it home in my suitcase, I’d have bought one in a heartbeat! ^^ 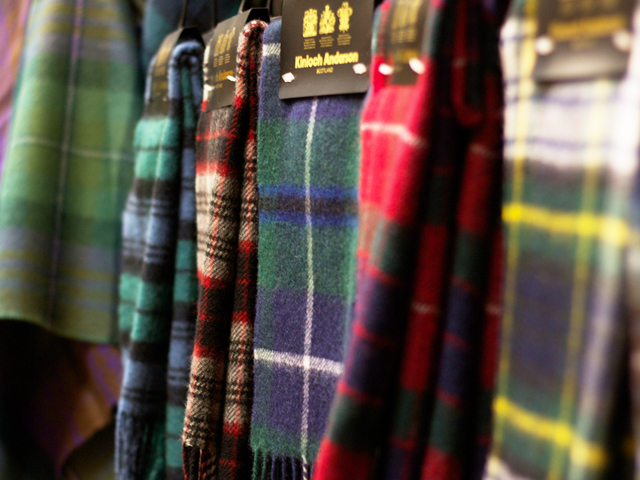 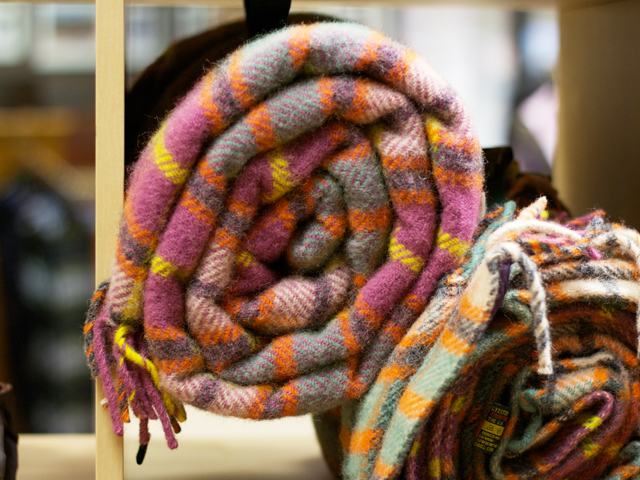 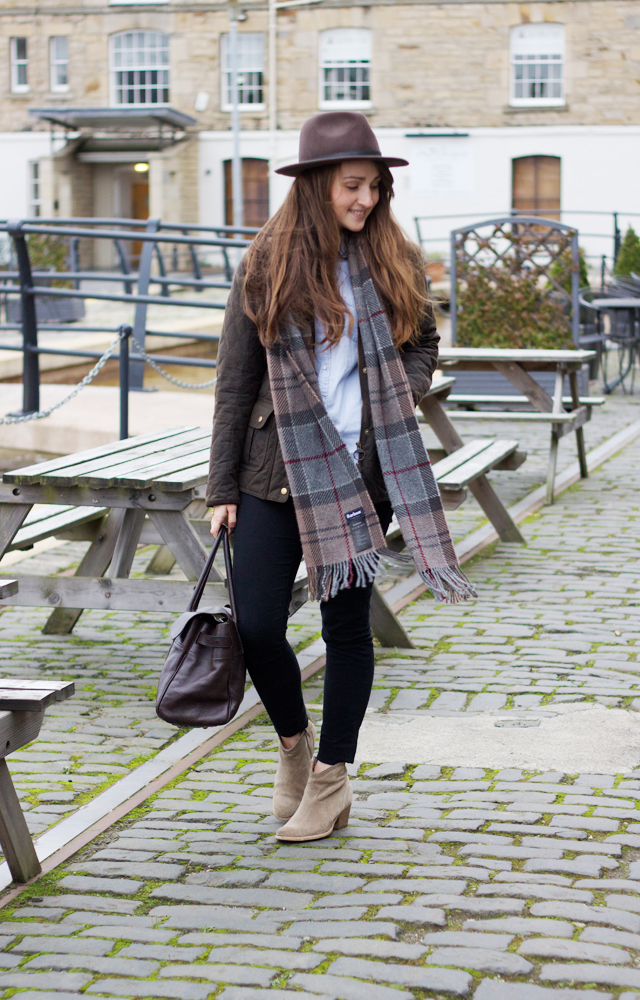 After leaving Kinloch Anderson, we headed over to the riverside for lunch at The Kitchin. I felt so full up after the previous night’s dinner I thought I’d never manage to eat again, and yet by the time lunch rolled around, I was pretty ravenous! The Kitchin had a lovely modern-elegant feel to it, and the food was wonderful. The emphasis is on ‘From nature to plate’, and we were given a little printed map of Scotland at the start of the meal which showed the provenance of most of all the main ingredients. Inspired! I ate a starter of partridge, then a saffron risotto with pancetta-wrapped cod cheeks, followed by a chocolate and mint soufflé. All delicious, but the cod cheek risotto won the day. It was so rich and buttery, and both hearty and delicate all at once. 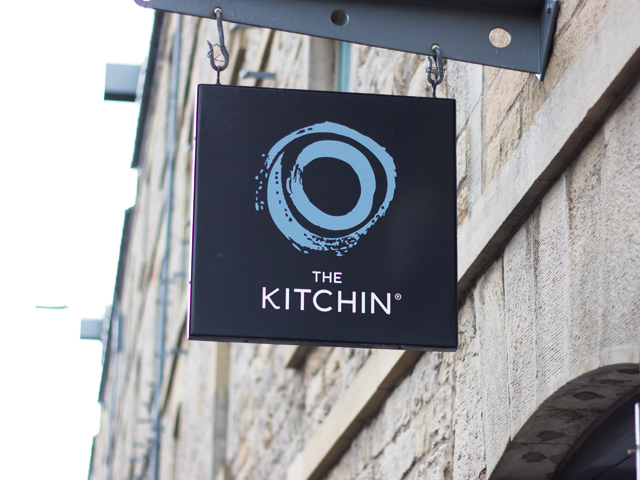 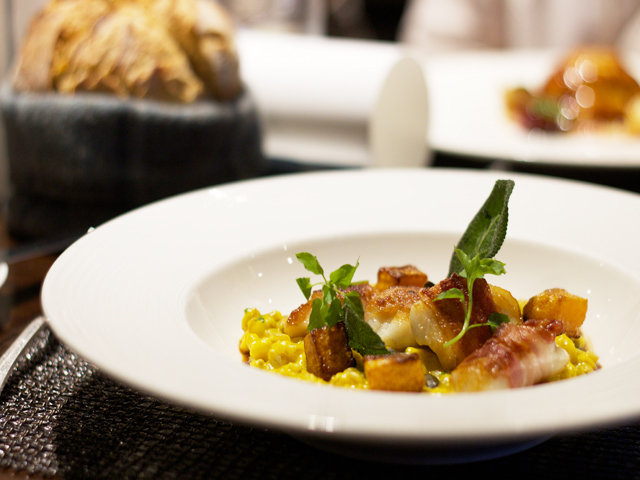 And so, to Newcastle! I’ll continue on recounting the trip tomorrow, so stop by in the morning for some a sunset that’ll blow you clean away! For now, we’ll leave off with the sun setting over the river Tyne… 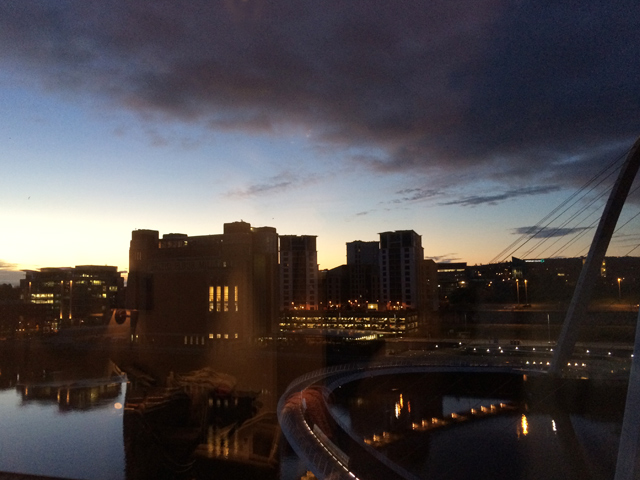