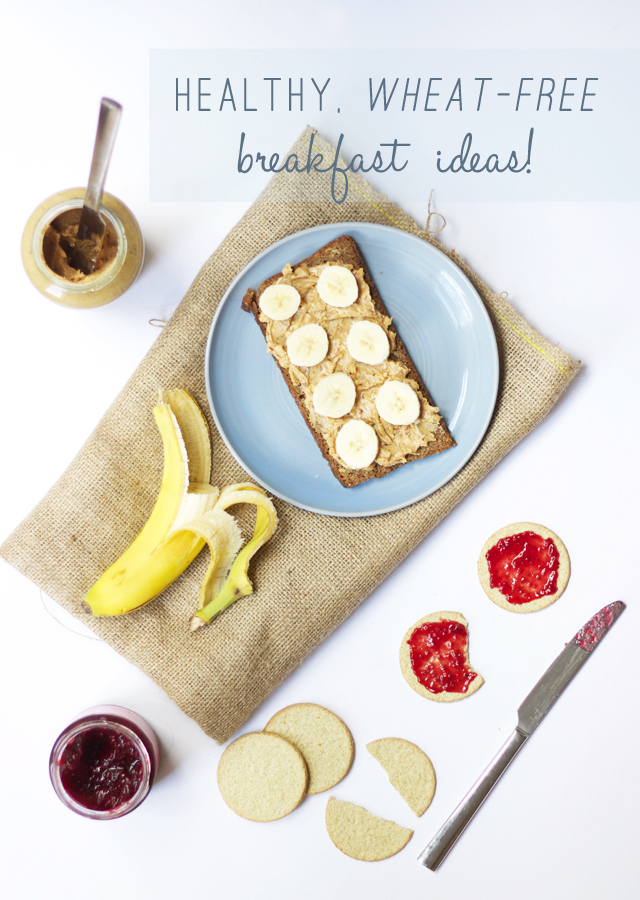 I wake up most mornings with a craving for something sweet. Occasionally (*very* occasionally) I’m happy to go savoury- with a little scrambled egg, or some avocado toast- but generally, I wake up hankering after the sweet stuff. Jam. Fruit (stone fruits in summer, apples and spiced berries in winter, bananas all year round). Anything-drizzled-with-syrup. Things-dipped-in-Nutella. You name it- if it’s got a high sugar content, I’ll be craving it at 7.30am. Which isn’t always the best thing, because you know, eating really sugary foods first thing in the morning inevitably leads to a big old burst of energy up front, a crash-and-burn a couple of hours later, and then next thing you know you wind up staring at the last few remaining crumbs of your lunch come half past 11.

Recently I’ve been trying to pay more attention to the energy that our food provides us with, since I like to do a fair bit of exercise and have been trying to strike the right balance between fuel in, and energy out. And since in the past year or so I’ve also been cutting back drastically on the amount of wheat I consume (you can read a little more about that here, if you fancy), instead of the usual jam-and-toast that I once used to reach for in the mornings, I now try to choose more wholesome and energy-sustaining options. I’ve found that avoiding eating wheat in the mornings and opting for slower release foods instead stops me from having a big sugar crash around 11am, because the complex carbs are there ready to provide a slow-burning energy once the quick boost from the sugar has worn off. It’s pretty rare now that I get hungry before midday after eating breakfast sometime around 8am, and both Jason and I have been feeling all the better for trying to eat a diet that provides sustained levels of energy.

These breakfast ideas are just that- ideas! I can’t call them recipes (since they’re far too simple), instead they’re just a little snapshot of what I’ve been enjoying eating each morning, of late. Even better if that breakfast can be eaten sitting outside in the sunshine, whilst drinking an iced latte and reading that’s morning’s newspaper. Haha. Just kidding. I mean scrolling through Twitter, obviously… 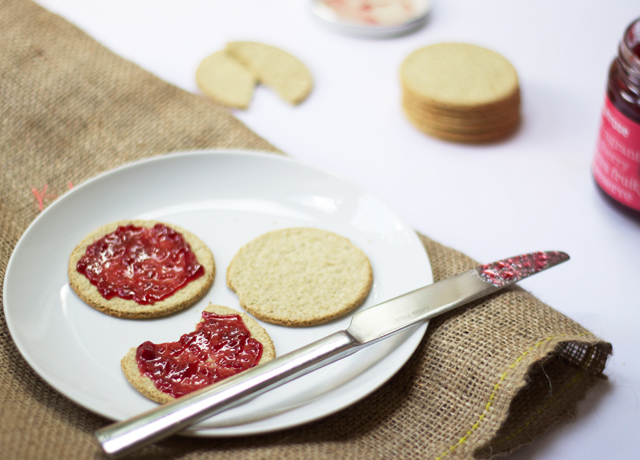 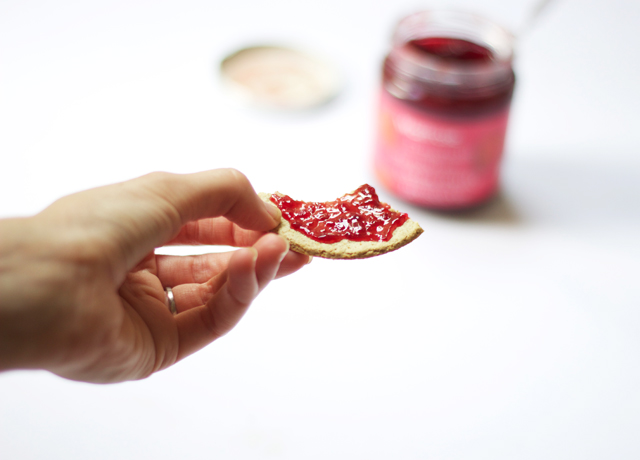 These are what I’ve been reaching for when I need a super quick breakfast, or something I can take on the go. Just jam-up a little stack of oatcakes (I love the Nairn’s fine milled oatcakes especially) and umm…that’s it! They’d also be lovely with nut butters instead of (or as well as!) jam, but I love the contrast between the sweet fruitiness of the jam and the biscuity savouriness of the oatcakes. Yum. Since this breakfast is kind of a light one, I usually have it with a piece or two of fruit as well. In fact, this is *exactly* what I had for breakfast on Saturday morning! 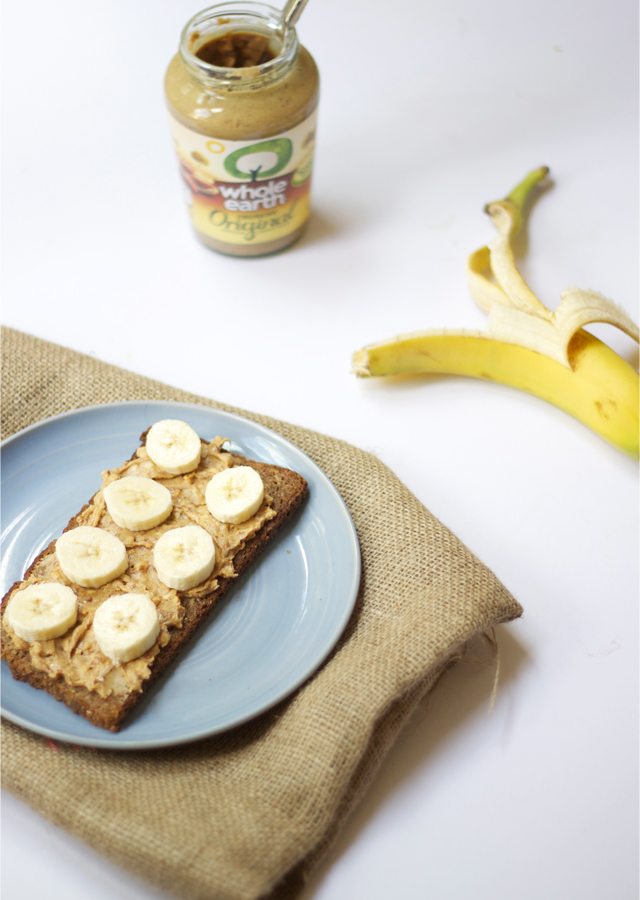 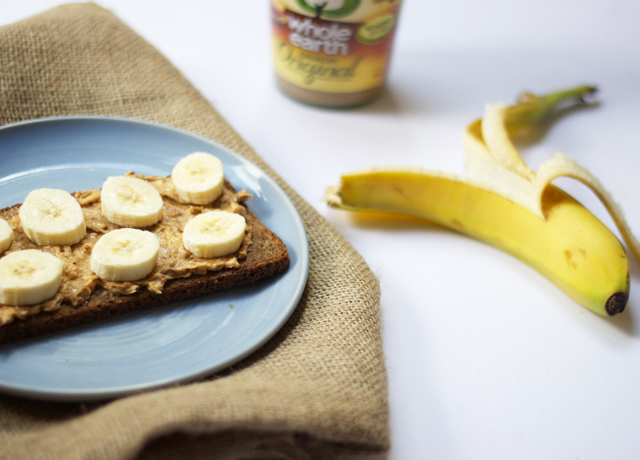 This is a current favourite of mine, especially on days when Teddy and I are going on an especially long morning walk or if I’m heading up into London for a whole day of meetings/appointments/gallivanting. It’s *so* filling, but not in that horrible heavy-stomach way. The bread is completely wheat-free and keeps me feeling full of energy for hours, and the banana provides the sweetness I’m always after in a breakfast. I’ve also recently been making up a slice of it in the mornings, cutting it up so that each little square has its own banana slice, and grabbing a square every time I’ve felt peckish throughout the day. It’s perfect for days when your body’s asking for a constant stream of fuel rather than just having three larger meals. Oh and also, I find that I sometimes am put off buying healthy/organic/’alternative diet’ foods because they can be so expensive, but this bread is a fairly modest £1.35 (Schneider Brot organic rye and sunflower seed bread) for an 8 slice, 500g loaf. It also only has 5 ingredients, and one of those is water, so it’s pretty good stuff! (Also insanely delicious eaten with jam and peanut butter!) 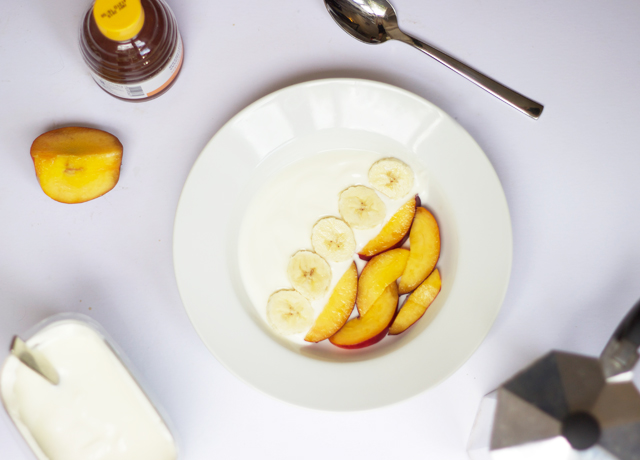 Ahhh, yoghurt. We burn through yoghurt in this house like it’s going out of fashion. Still probably the thing I reach for more often at breakfast time, I always add as much lovely fresh fruit as we’ve got in the house and almost always a handful of oats/granola/chopped nuts too. Jason and I differ on the best way to sweeten natural yoghurt (I like a little drizzle of honey or little dollop of jam, or just go au naturel if I’m eating it with sweet ripe fruit) whereas Jase prefers his with granulated sugar. It’s honestly one of the few things we don’t see eye to eye on! ;) Favourite toppings include rhubarb compote (recipe here, if you’d like one!), chopped pineapple or mango, the scooped out innards of a passionfruit, berries, and in winter, raisins + chopped nuts + a scattering of cinnamon.

These aren’t the fancied of ideas (no wilting of greens, no multi-layered ‘breakfast parfaits’, or 10 ingredient smoothies) but they’re what I actually really in real life eat for breakfast. And I like talking about breakfast, so that’s that! Shall we have a sharing of breakfast ideas in the comments? What do you like to eat for breakfast, in the summertime? :)

19 Comments
Posted in BREAKFAST, FROM MY HOME TO YOURS
Read from the beginning >