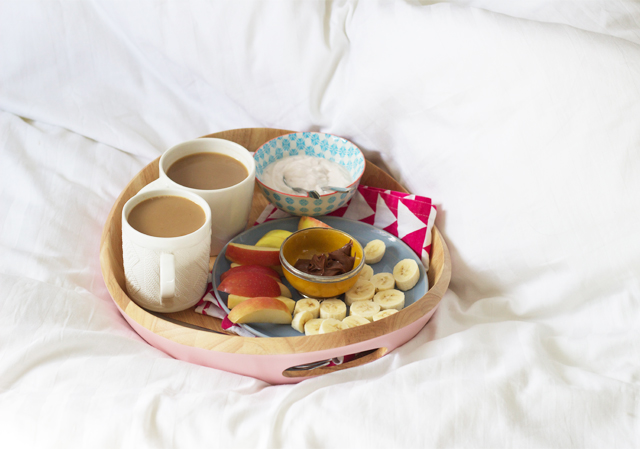 This weekend was wall-to-wall amazing. The sunshine! Brunch! Blossom! Ducks on the pond! Endless coffee, and Netflix-marathoning, and spending time with family! I don’t think it could’ve been more perfect if it tried.

Let me break it down :: I woke up early both days, which I’m learning for me is the key to a great weekend. Jason and I differ wildly on this, and I don’t know about you, but I kind of feel like I’ve wasted the day if I lounge around in bed till midday and don’t get showered or dressed until the early afternoon. We started the weekend with breakfast in bed (on that little pink tea tray I’m so obsessed with) with the curtains and windows open to let in as much sunlight as possible. You know, it still feels such a novelty to actually *want* to spend time in our bedroom. The old combination of pink carpet, pale pink walls and a floral wallpaper border (picture that!) was so hideous that we basically spent as little time in there as possible. We’re still kind of giddy to have a bedroom that feels serene and beautiful, and that we can enjoy spending time in.  We talked over our week, and ate yoghurt and fresh fruit with a little Nutella for dipping. Jason and I have been working hard recently to share our stresses and worries with one another, because we both have a tendency to clam up about the big stuff and then find ourselves venting our stress and frustration by being irritable with one another. Even though I’ve always considered us to be pretty good at talking and sharing with each other, communicating so openly is making the hugest difference to our relationship.

Jason tends to take care of Teddy on Saturdays- they go on a little morning walk before Teddy’s training class in the afternoon- so I spent most of the day tidying up the house (which felt SO GOOD I can’t even tell you!) doing a work out (which also felt amazing, though I’m still aching) and then popped to the garden centre in the afternoon with my Mum. I needed to buying a new notepad and Teddy some rawhide treats, but came away with some a bunch of pink ranunculus and a bluebell scented candle instead. Such is the overwhelming power of pretty candle displays and cut flower departments, I guess. 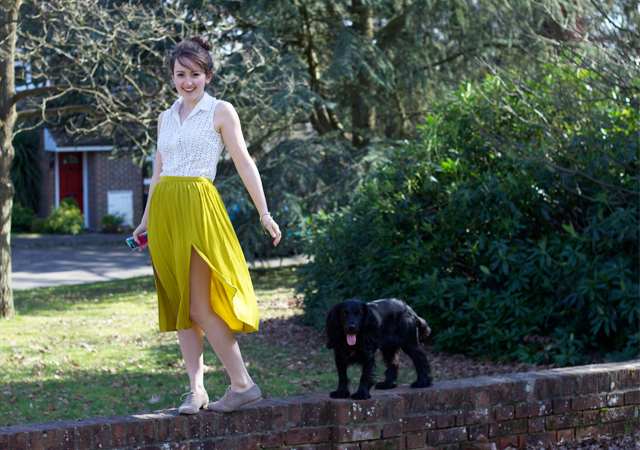 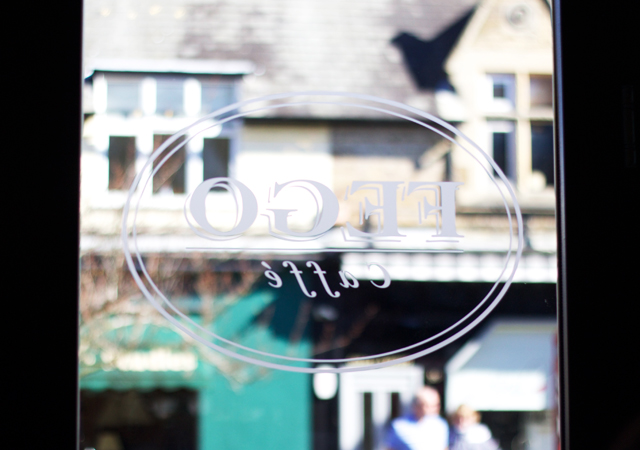 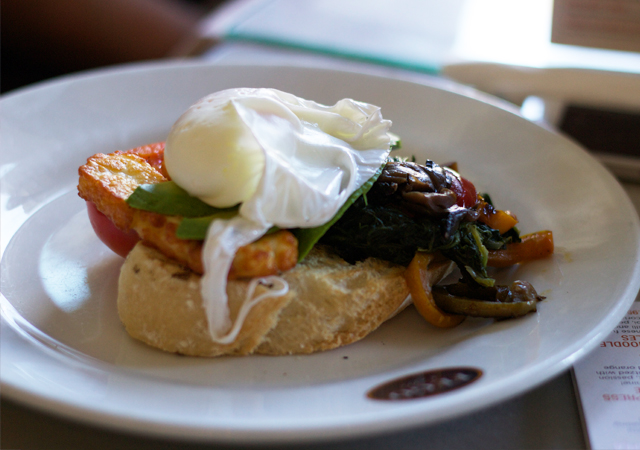 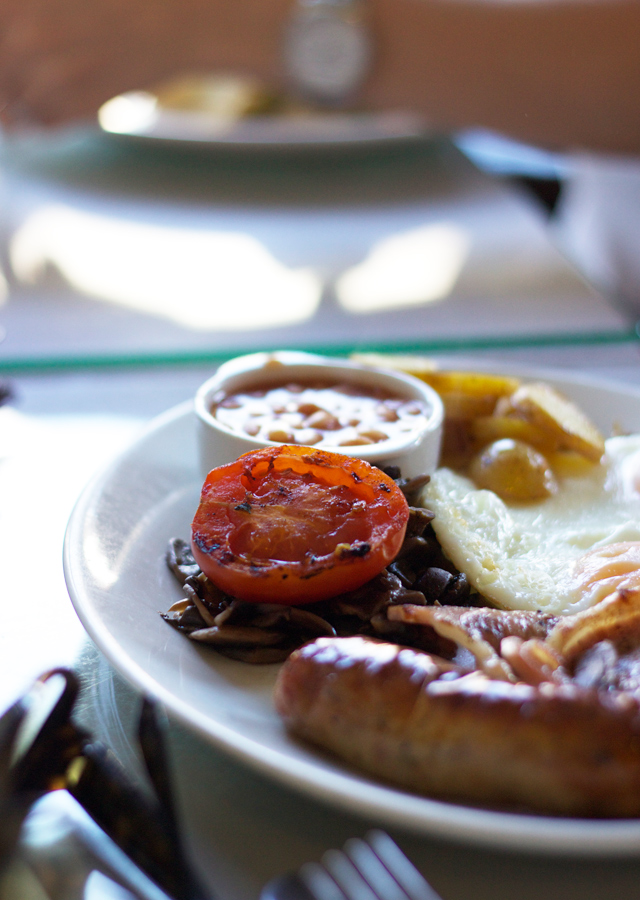 Sunday marked the two year anniversary of my Grandma’s passing, so we met up with my Mum, sister and cousins to eat brunch together and to celebrate her life. And it really did feel like a celebration, which is strange because in those early days, just after we watched yet another member of our family fade away, it felt as though there’d never be anything to celebrate again. Grief is a strange thing. It sits, pooled, at the bottom of my lungs, heavy and constant and still, only rising up like a wave and spilling forth in the rare moments when my mind is quiet and unoccupied by the present. It felt like drowning right at the beginning. The grief bubbled high in my throat- a physical squeeze around my windpipe that constricted my ability to breathe and speak and eat, and made all the words that came out of my mouth either a whisper or a shout. It recedes though. Slowly, steadily, reluctantly even.

My family, like all families, have lost. We’ve lost fathers, and uncles, and mothers, and grandfathers. And yet even after all that we are able to unite, years on, and laugh and celebrate and remember without feeling broken by the amount of empty chairs at our table. Family astounds me. The human spirit astounds me.

It was a really, really good weekend. I hope you had a beautiful one, too. <3 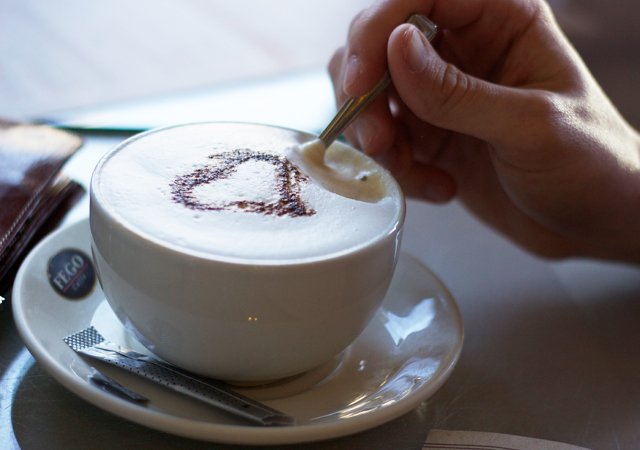 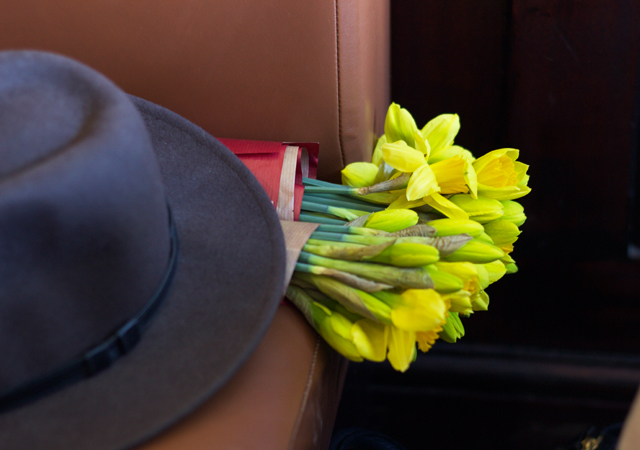 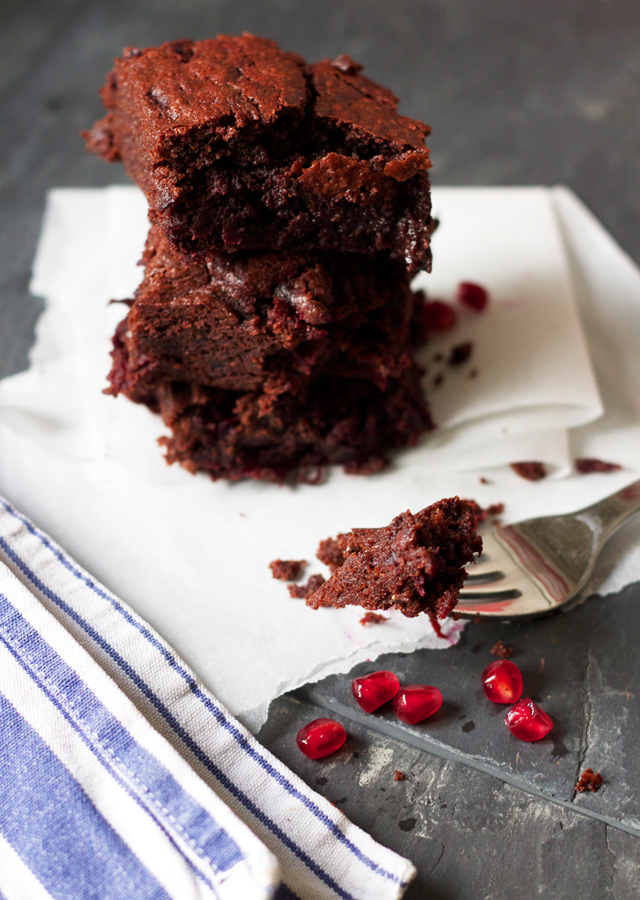 Happy Monday, everyone! Didn’t this weekend fly? Last night I was laying in bed thinking ‘it can’t be nearly next week already. It can’t be!’. But it is! And we’re starting this week off in the very best way. With chocolate. Remember how I told you I was struggling to decide whether to cook the beetroots I’d bought for this month’s ‘Eating Seasonally’ recipes in a sweet or a savoury dish? Well, I opted for sweet. I couldn’t help myself! I did really try and talk myself round to roasting them slowly with a dark balsamic glaze…but then I found a recipe for beetroot brownies when searching for dinner inspiration in Hugh Fearnley Whittingstall’s ‘River Cottage Everyday’, and the rest is history. I have a couple of beets left in the fridge though which *are* destined to be roasted. I promise.

These brownies tick all the boxes we require a brownie to tick. They’re rich, and dense, and intensely flavoured. I’ll be honest with you though, when I tried a piece just after they’d finished cooking and cooling, I wasn’t sure I liked them. They tasted good, but the beetroot (both its taste and texture) was a little too prominent for my liking. Like a fine wine though (and good cheese, which I way prefer to good wine) they’ve just kept getting better with age. I mean, it’s not like they’re horrible on day one or anything. You know, they’re made of chocolate mixed with fat and sugar, so what’s not to like? But after 24 hours in an airtight tin, they’re a whole different level of amazing. The beetroot kind of melts away, leaving behind the most amazing fudgy moistness and a depth of flavour I’ve never managed to achieve with any other brownie recipe. The first day Jason ate one his (predictable) response was ‘you’ve totally ruined good chocolate by adding vegetables to it, B’, but he’s since been devouring at least one or two per day without complaint! And this, from the man who is so staunchly anti chocolate and fruit/veg being mixed together he won’t even eat the strawberry creams from a box of Quality Street, is praise indeed! 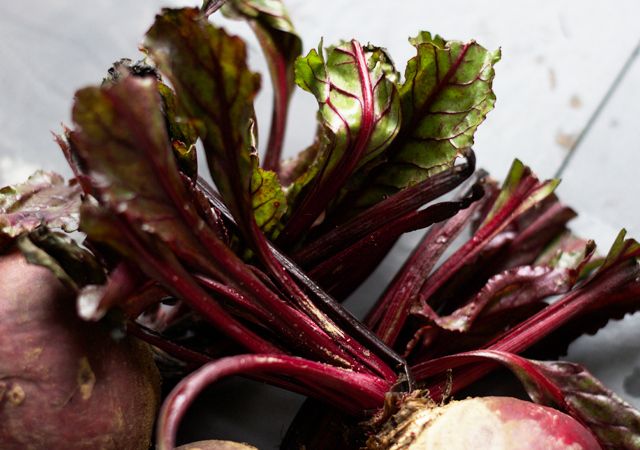 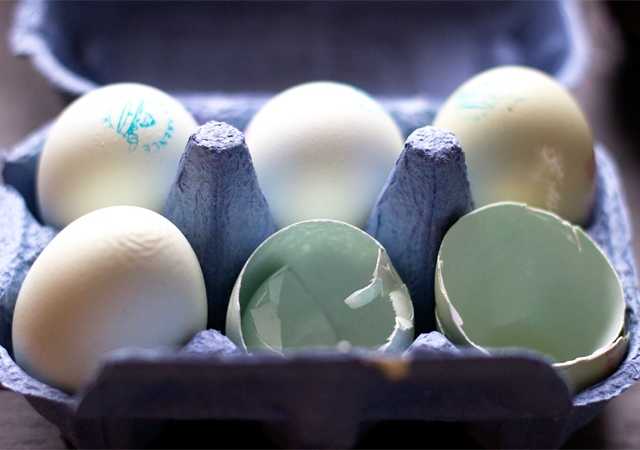 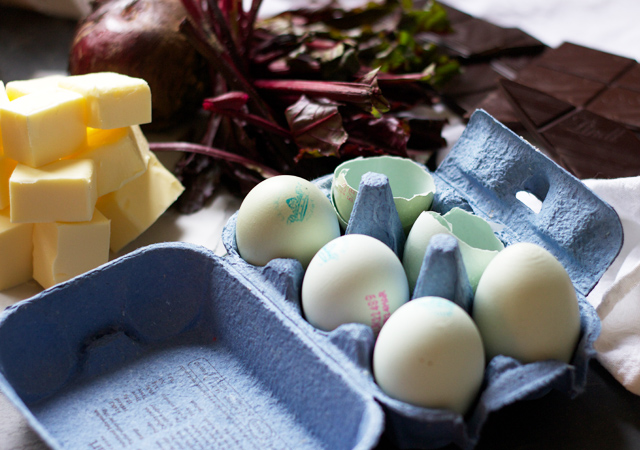 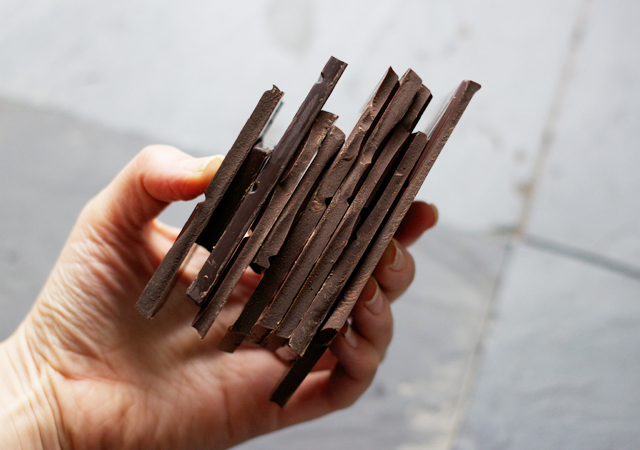 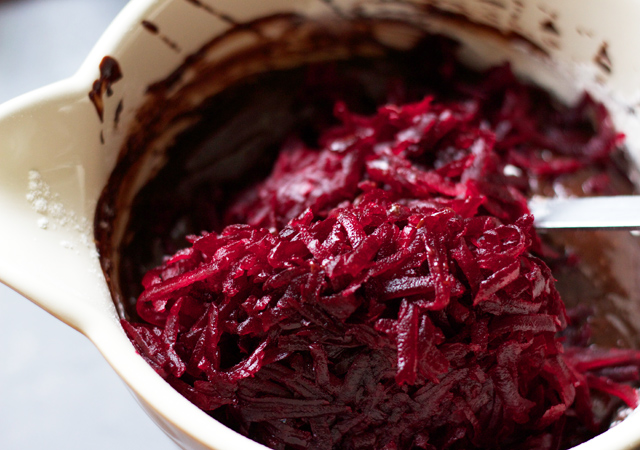 - Heat the oven to 180 degrees celsius, and grease & line a square baking tin with parchment paper.

- Place two large beetroots in a pan of water, and boil rapidly until tender. (I stupidly forgot to time how long it took for mine to cook, but am certain it was at least 25 minutes. Just poke them with a knife at regular intervals, until the beets are as tender as a boiled new potato) When cooked, drain, and set aside to cool. When cool enough to handle, just slip off the skins and grate using the small-hole side of a box grater. (n.b. I used the larger side of a box grater for this batch- the side you’d use to grate cheese- and found the strands of beetroot to be a little too chunky)

- Set a heatproof bowl over a pan of simmering water, and place into it the butter (roughly chopped for easy melting) and chocolate (broken up into smallish pieces). Melt them gently, stirring a little to combine.

- Whisk the eggs and sugar together in a separate (quite large) bowl, then stir in the melted butter and chocolate mixture. Sift in the flour, fold carefully into the batter (along with the pinch of salt) and then fold in the grated beetroot. Stop mixing the very moment the flour and beetroot have been combined into the batter. Better to have the odd streak of flour, then tough, overworked brownies!

- Pour into the prepared baking tray, and bake for 30-40 minutes. Check after half an hour by poking a strand of spaghetti (always on-hand, and you can just throw it away afterwards!) into the centre. It should come out with some crumbs stuck to it, but not coated in liquid batter.

- Allow to cool for 10 minutes or so, then turn out onto a wire rack. Cut into slices when completely cooled. If you can, make them a day before serving so the flavour can intensify overnight. 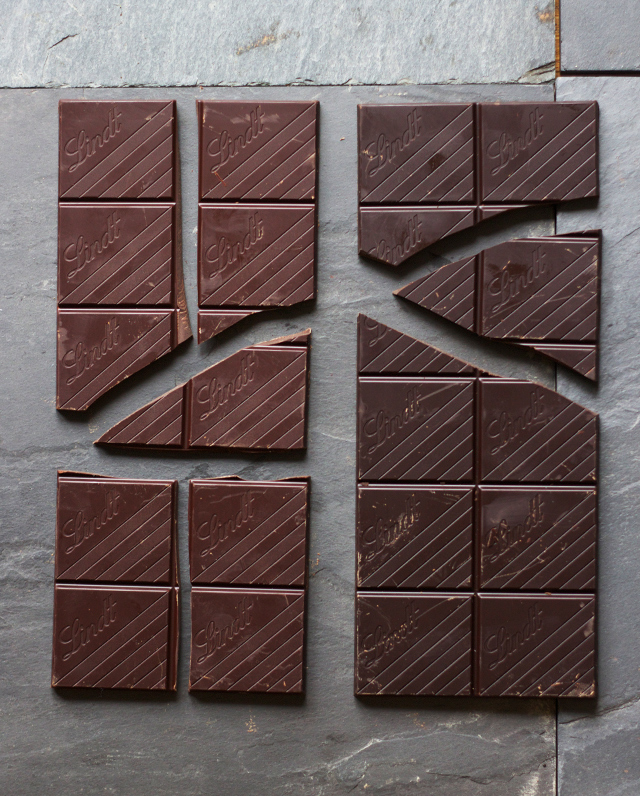 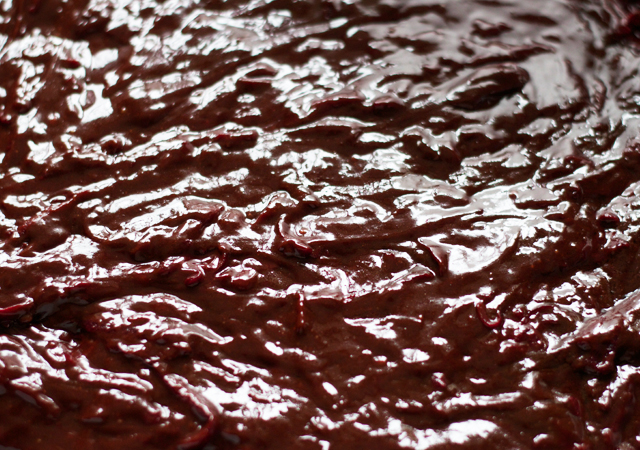 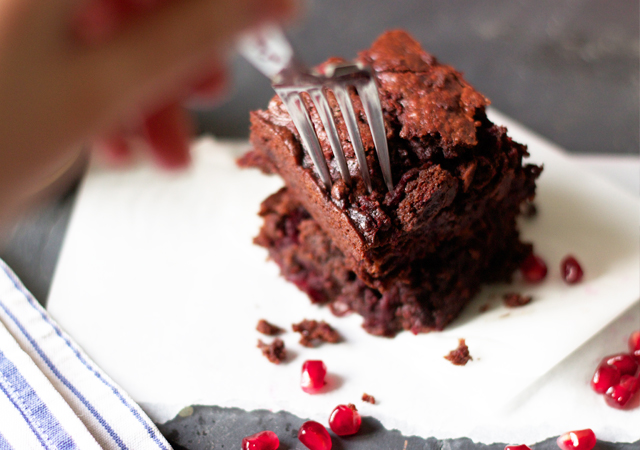 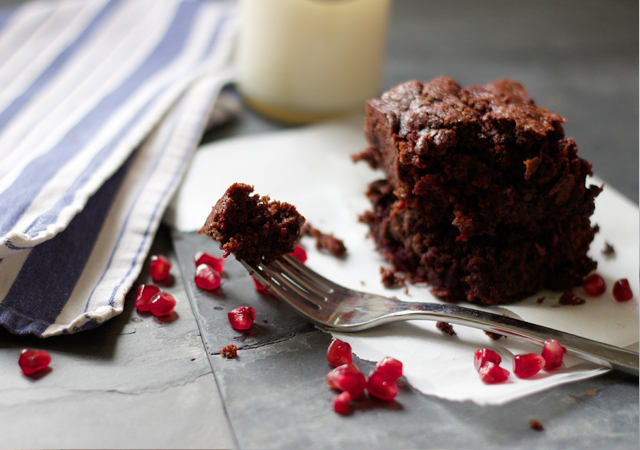 14 Comments
Posted in CHOCOLATE., EATING SEASONALLY, FROM MY HOME TO YOURS 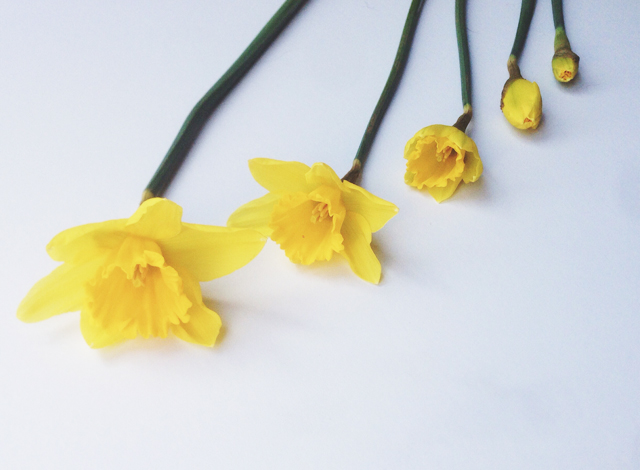 All I’ve wanted to do this week is lay around in the sunshine, and take photos of daffodils. Seriously. That’s it. It’s not been the most productive week, if I’m honest. And Jason’s felt the same way! Maybe there’s been something in the air? (Tell me you’ve felt the same way? Feel free to lie if you like, to make me feel better?;) This weekend we’re planning on taking things slow- maybe head out for a spot of shopping, and definitely go out for brunch on Sunday with family. We’ll also be doing a little life-laundry too (bathroom-cleaning, bed linen-changing, general tidying) and are keeping our fingers crossed that Teddy sleeps in late enough Saturday morning to allow us a long, leisurely lie-in. Happy Friday, friends! Here’s what’s made me most happy this week…

1. Blossom, everywhere! Hasn’t this been the most beautiful week so far this year?

2. Doing a short, super simple Pilates routine in the middle of the woods the other day. It felt so amazing to take a moment to breathe deep and stretch tall.

3. Meeting the two little shihtzu-poodle cross puppies that live a few doors down from us. They’re the absolute cutest, and love a cuddle. Which was good news, since I’m never not in the mood for a puppy-cuddle!

5. Homemade burrito bowls! They rock! Absolutely our new favourite dinner to cook (and eat) of late. (Though I way overdid the spicing of the chicken for Wednesday’s burrito bowl. It made my ears hurt, it was so hot.)

6. The feeling of warm sun on my face, whilst out letting Teddy stretch his legs by the pond on Wednesday afternoon. I could have stood there for hours, feeling it warm on my cheeks.

7. Having Jason home with me all day Thursday. He took an impromptu day out of the office, and though I still had to work, it was such a treat to have him here…even if he did steal all the bandwidth watching Netflix for hours on end ;)

8. CHALKS! I spent most of yesterday morning playing with chalks and slate tiles, whilst styling some food shots. Pretty much the most fun I’ve had in a good long while! (Remember doing patio chalk as a kid? The best!)

9. The sight of a beautiful candle waiting to be burnt. I’ve got a Neom Moroccan Blush Rose candle sitting on my bedside table that I’m saving for when our bedroom decor is all finished, and even unburnt it scents our room so beautifully.

Three (food-themed) posts I enjoyed reading this week :: Ella’s recipe for coconut porridge (which looks to die for!) || Kathryn’s gluten free brown butter honey cakes || & the entirety of Two Red Bowls, which was a new find for me this week and I just cannot get enough.

p.s. To keep up with Cider with Rosie over the weekends, follow along on Instagram! Find me at ‘ciderwithrosieblog’! Happy happy weekend!