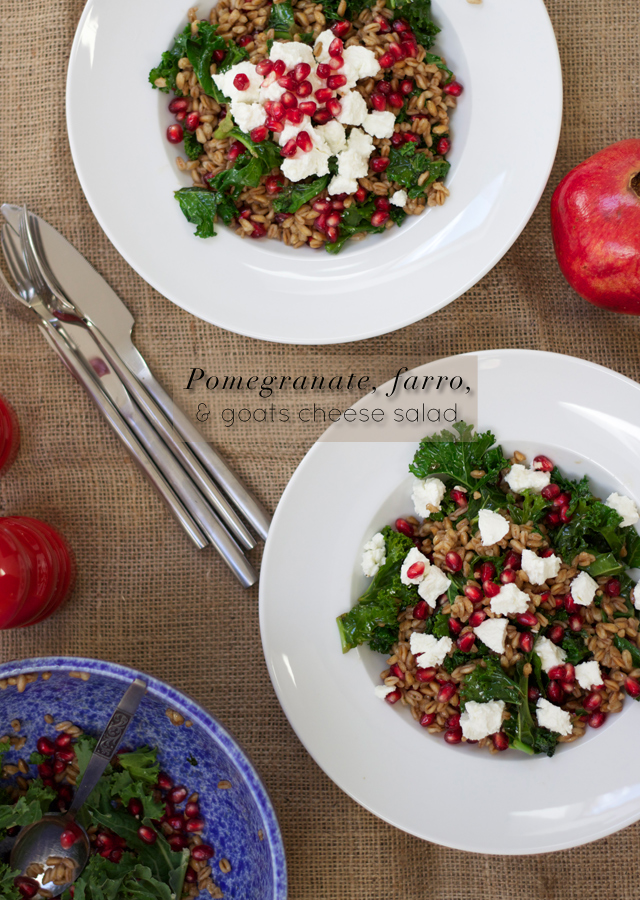 This salad is a multiple box-ticker. Kale and pomegranates are both at their best in January, and both ingredients are also antioxidant-rich superfoods. There are pomegranate seeds not only in the salad itself, but also incorporated into the vinaigrette in the form of pomegranate molasses. It’s wheat-free, meat-free, and can easily be made vegan by omitting the goats cheese. It tastes wintery and hearty and wholesome, but also light and refreshing all at once. And since it keeps beautifully in the fridge, it would be a lovely one to make up at the weekend, and pack up ready for midweek lunches.

Farro can be a bit fiddly to track down (my local Waitrose always has it in stock, but as far as I can see neither Sainsbury’s or Tesco currently stock it) so feel free to replace it with more traditionally English pearl barley if can’t get hold of farro. It is worth hunting down if you fancy it though, since I’ve made this salad with both grains and really do think the more toothsome texture of farro works best here. 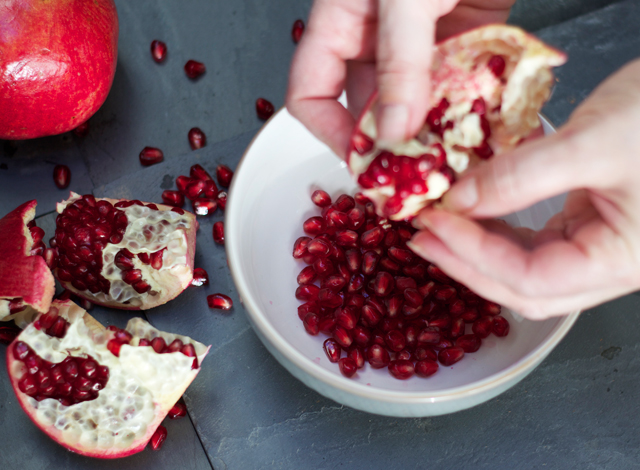 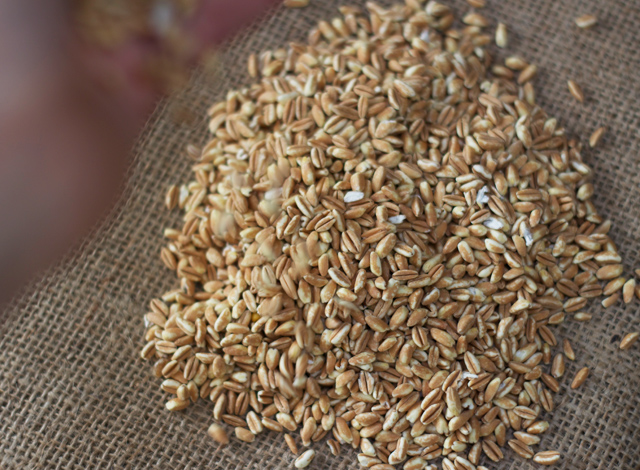 I made this batch up on Saturday to eat for lunch at my Mum’s, whilst Jason and the woof went out walking. Jason doesn’t like the vast majority of the ingredients in the salad (Pomegranates! Kale! Fruit paired with cheese!- I know. What’s up with the man?!) and so I decided to take it somewhere it would be fully appreciated. And thanks, lovely Mum, for playing hand model for me! You’re the best. And also thanks for helping me clear up after I’d finished cooking and shooting. Post blog-recipe-shoot clear up is my least favourite activity in the world, and I did make an exorbitant amount of mess with this one. 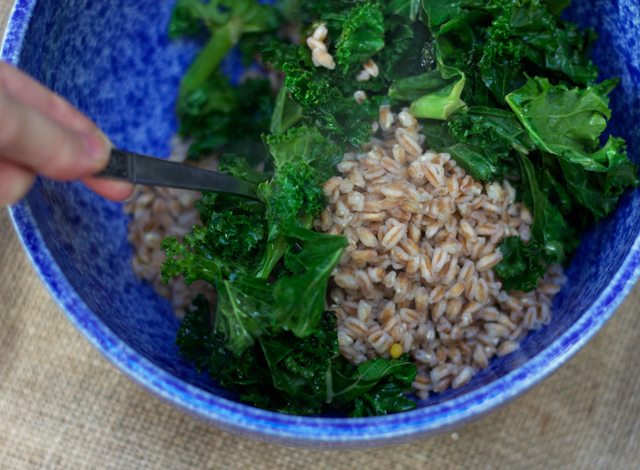 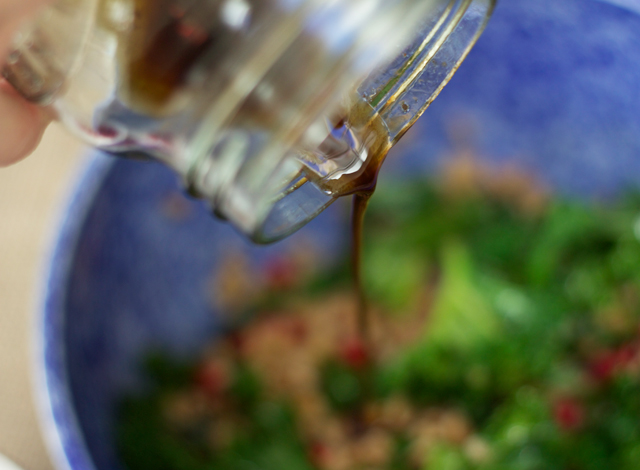 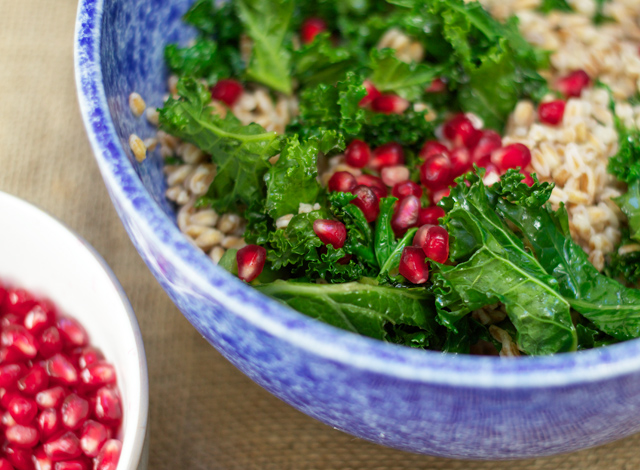 - Firstly! How to ‘butcher’ a pomegranate! Take the pomegranate, and carefully cut the top and bottom off it. The idea is to cut through as few seeds as possible, so try to only take off about half a centimetre or so at each end. Then, with your knife, make shallow cuts from top to bottom in the skin of the pomegranate, along the six or so gentle ridges that run down its body. Then, with your hands, gently split the pomegranate in two, and then split each half in two again. The seeds can now be popped from the segments easy as anything! Some people like to use the ‘bash with a wooden spoon’ method here, but I prefer to just separate the seeds away from the skins manually. (Please note! Pomegranate juice stains like you wouldn’t believe. Even the slate tiles used in these photographs have been stained, as will chopping boards, worktops, and fabrics be if the juice is left to linger on them. Watch out! Be vigilant! Stay safe! ;)

- Cook the farro according to packet instructions (place in a pan of cold water, bring to the boil, and simmer for 10 minutes), and meanwhile, let’s wilt kale! Drizzle a little olive oil into a large frying pan or high-sided saucepan, and add in a lightly crushed, whole and skin-on garlic clove. Heat the oil gently for a moment or two to release the garlic flavour, then add in three large handfuls of raw kale. Toss for a few minutes in the oil and garlic until slightly softened, season with flaky sea salt, and then set aside.

- In a bowl/jug/jam jar, put the olive oil, balsamic vinegar, pomegranate molasses, and a pinch of salt and pepper. Whisk together until amalgamated, and then taste. I like my vinaigrette to be pretty tart, but you may like to add a little more oil, or maybe even a little squidge of honey to balance out the acidity. The pomegranate molasses adds a lovely tangy note, but if you have trouble finding it (again, as far as I know it’s a pretty new product, and is only available in Waitrose) you could happily substitute it for a teaspoon of Dijon mustard.

- Drain the farro once it’s cooked (about 10 minutes), and add it to a big serving bowl along with the cooked kale (don’t forget to fish out the garlic clove!). Add in about two thirds of the pomegranate seeds, then mix to combine. Pour over about half the vinaigrette, taste, and then add the remaining dressing and adjust seasoning as per your preference.

- Serve with a little mound of crumbled goats cheese piled on top, and more pomegranate seeds scattered over. Enjoy! 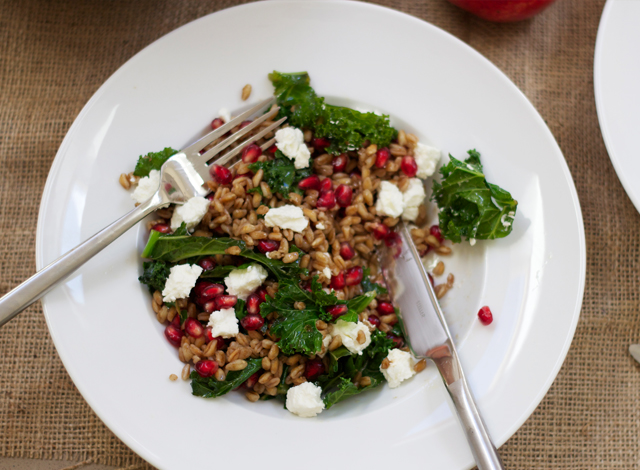 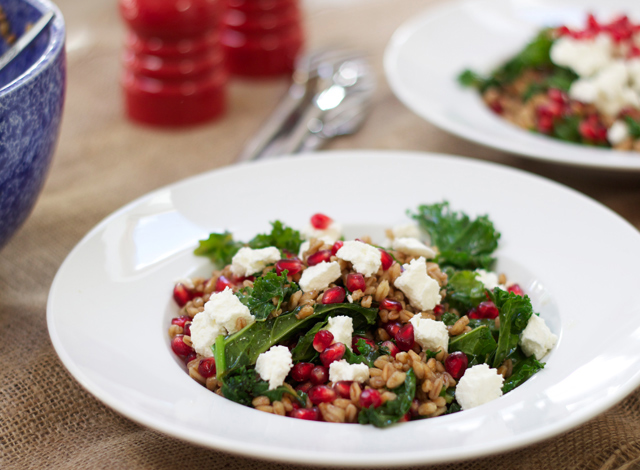 20 Comments
Posted in EATING SEASONALLY, FROM MY HOME TO YOURS, RECIPE
Read from the beginning >