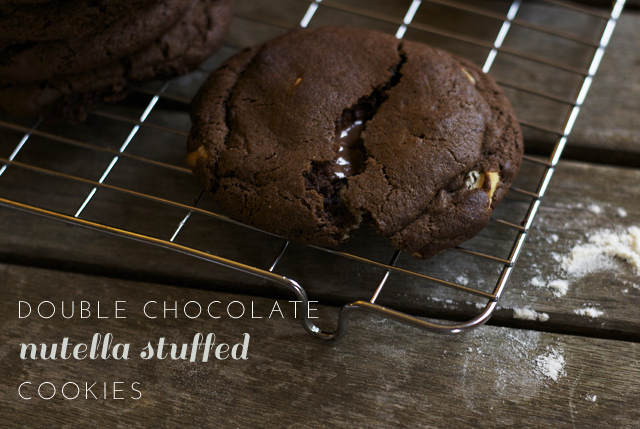 Hello. Here’s a recipe for cookies that don’t require a pre-bake chilling.

Because no one, in the entire history of chocolate, has ever thought ‘Do you know what? I think I fancy eating some chocolate chip cookies in about eight hours time.’ No. No-one’s ever thought that. Ever.

Cookies are for instant gratification, in my opinion. They need to be whip-upable in less than an hour to provide a quick fix for chocolate cravings, and be made up of store cupboard ingredients. Same goes for brownies. If a recipe requires eight pound’s worth of finest 80% chocolate, there’s a less than 1% chance I’ll be making it.

I went through a phase of making these on a once-monthly basis, and scoffing them until I felt a little queasy. This time I’ve been sticking to the whole ‘half of the portion I once would’ve served myself’ thing, and it’s been worked out just peachy. Because half of *all the cookies* is still quite a lot of cookies, you know? 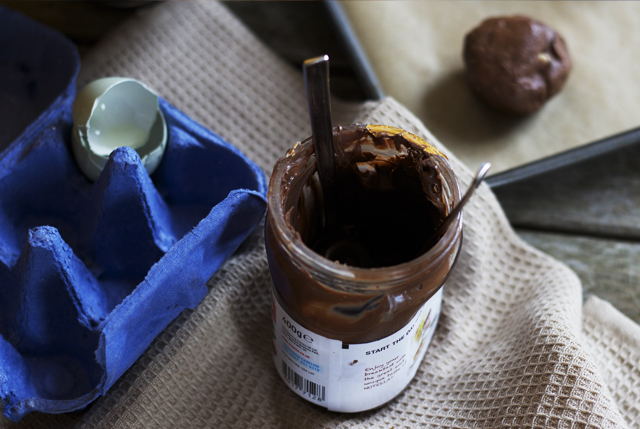 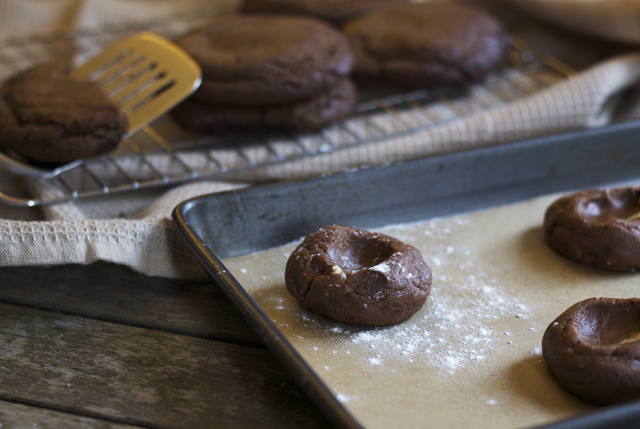 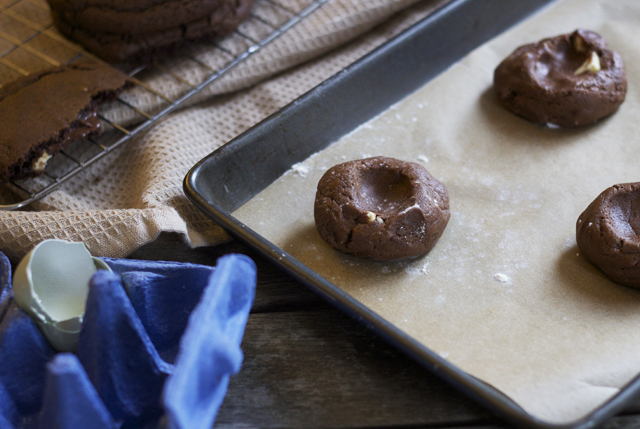 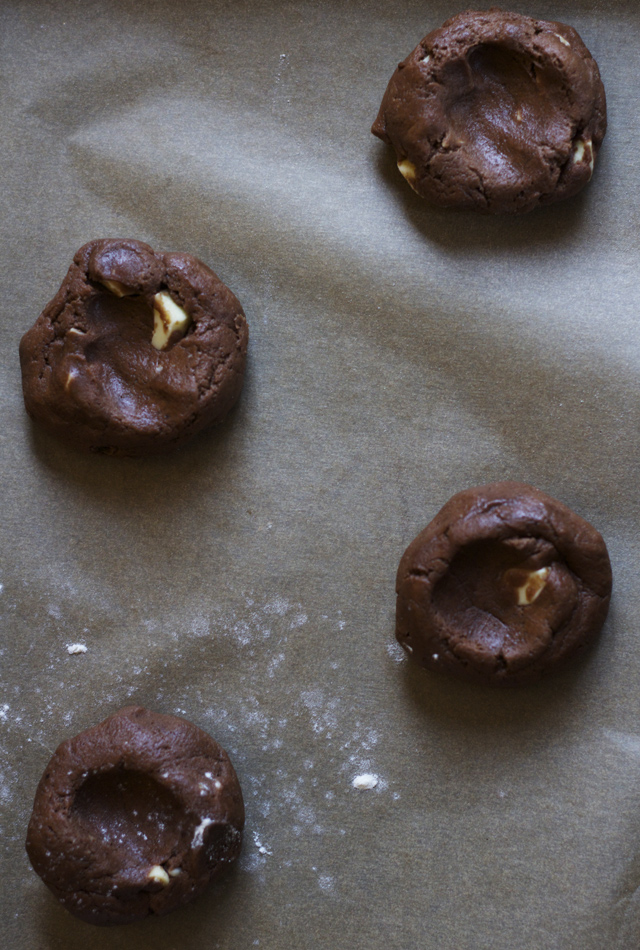 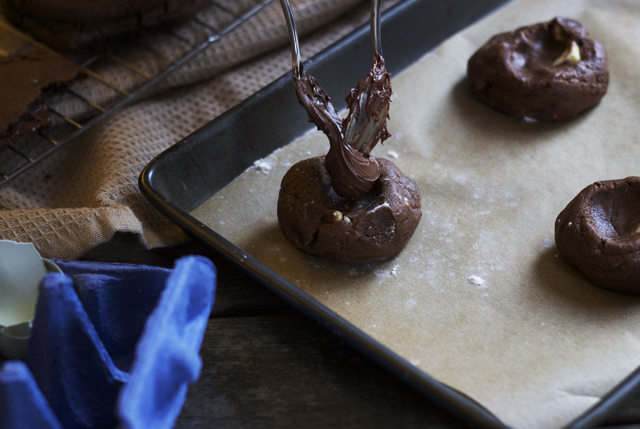 2. Put the butter and sugar together in a large bowl, and beat until fluffy and well combined. Add in the eggs one at a time, making sure you scrape the mixture trying to make a bid for freedom up the sides of the bowl. Pour in the vanilla extract, and mix.

3. Measure out the flour, cocoa powder, salt and bicarb into a separate bowl and add in to the butter mixture in two batches, beating to combine between each addition. Once a smooth dough has been formed, stir in the chopped chocolate by hand.

4. Line two baking trays with baking paper, and place four golf ball sized amounts of dough on each tray. Gently press your thumb into the centre of each ball of dough, to form an indentation.

5. Spoon about a teaspoon of nutella into the centre of each cookie, then flatten out pieces of dough about half the size of the cookie bases and squidge them over the nutella-stuffed bottom halves of the cookies like little hats.

6. Bake for 10 minutes, until the edges just begin to feel cooked. Leave to cool for a few minutes on the baking trays after removing from the oven, and then transfer to a wire rack to cool completely.

7. Best eaten on the day of baking, whilst the edges are crisp and the centres are a little warm. Store in an airtight container once cool. 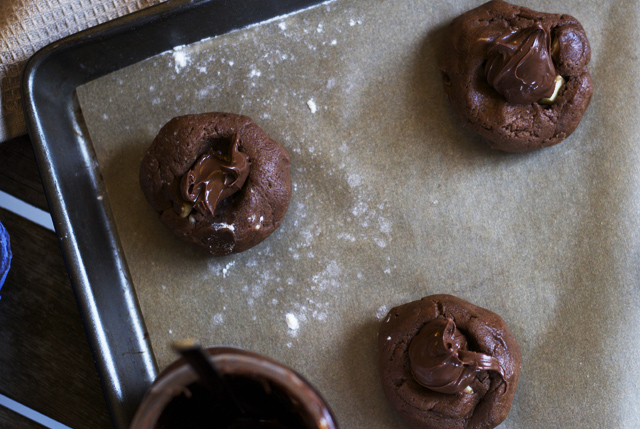 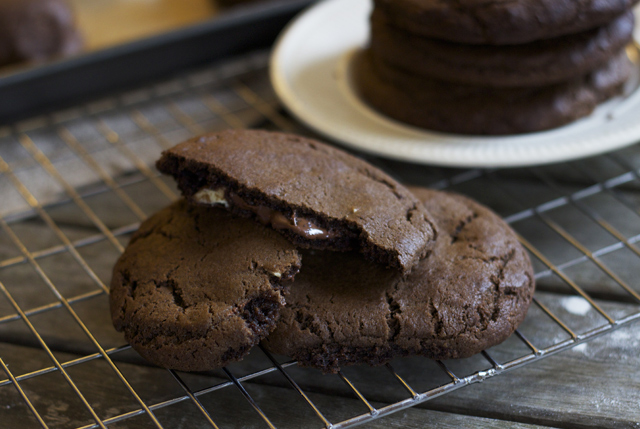 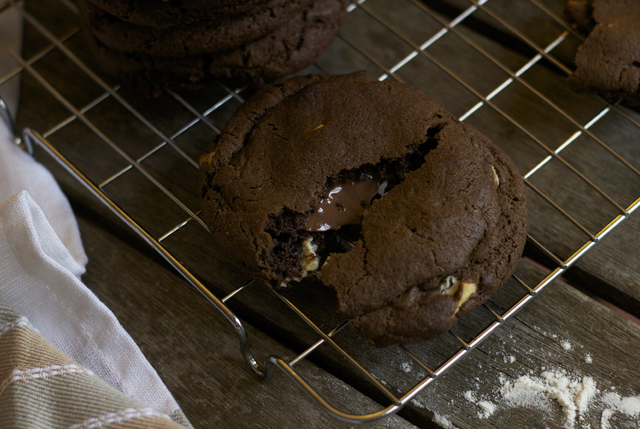 p.s. Any uncooked dough can be stored in the fridge for a day or so, until you’re ready for another chocolate fix. Winner!

26 Comments
Posted in BAKING, CHOCOLATE., COOKIES, FROM MY HOME TO YOURS
Read from the beginning >