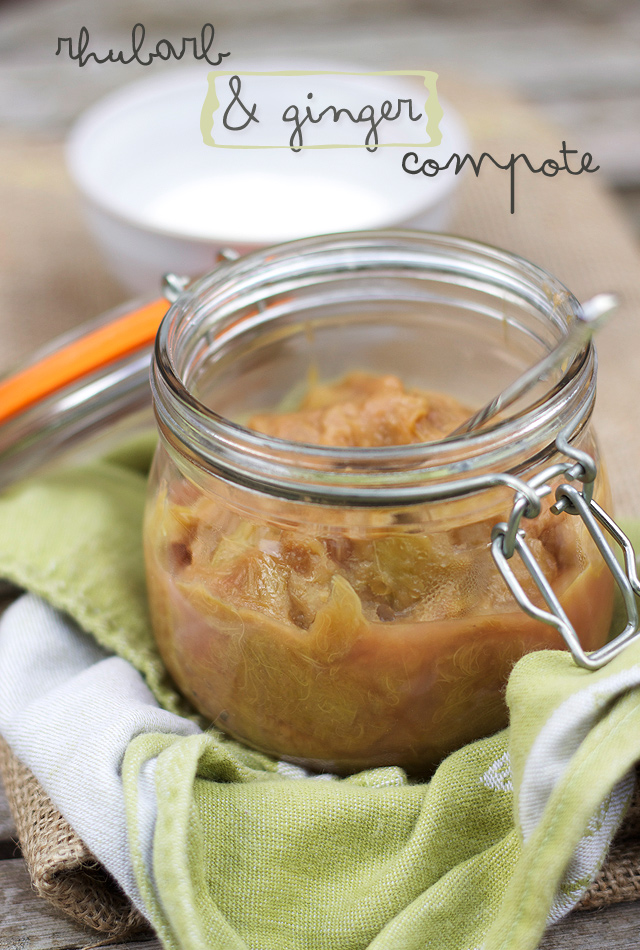 This compote has finally, after twenty two (and a half) years of solid dislike, made me enjoy eating porridge. This is good news! It means I can finally fulfil my lifelong ambition of being someone who wakes up on a frosty winter morning, puts on slippers and a fluffy dressing gown, and then potters downstairs in the half-light to make a reviving bowl of porridge and cup of tea. Idealistic? Youbetcha. 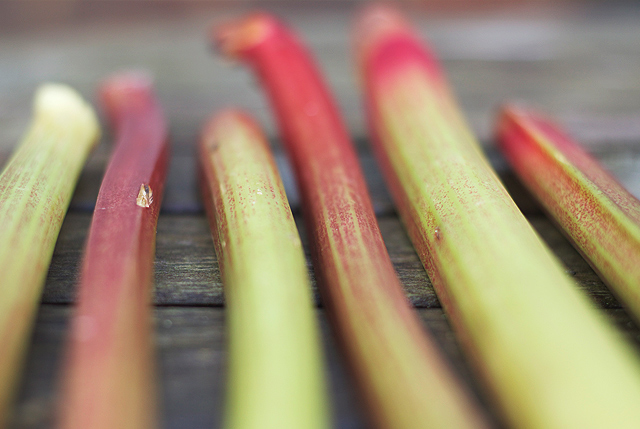 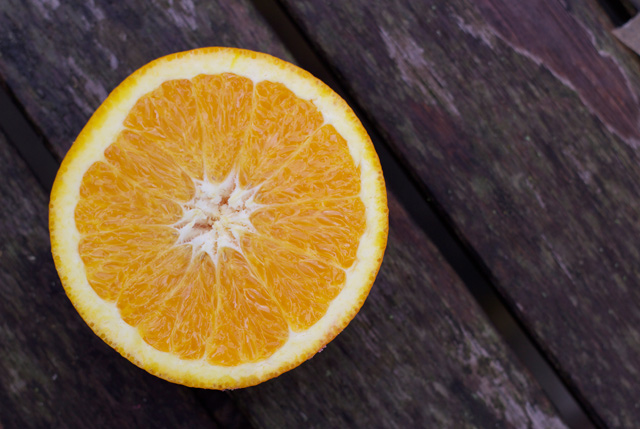 I’ve spiced up this compote with a dash of ground ginger. Ginger’s one of the few ingredients that I believe tastes better in its dried form than when fresh. The smell of it takes me back to baking with my Grandma in the tiny kitchen of my first home, cooking up ginger biscuits laced with so much golden syrup that they’d always spread enormously in the oven, and end up as wafer-thin gingery puddles. Those biscuits were always tricky to cook. There was about a thirty second window of time in which they would be crisp at the edges and deliciously chewy inside, but cook them a second too long and they’d be hard enough to break your teeth. I *think* I’ve got the recipe in the recipe book I inherited from her. If I can find it, they’ll be on this week’s cooking agenda for sure. 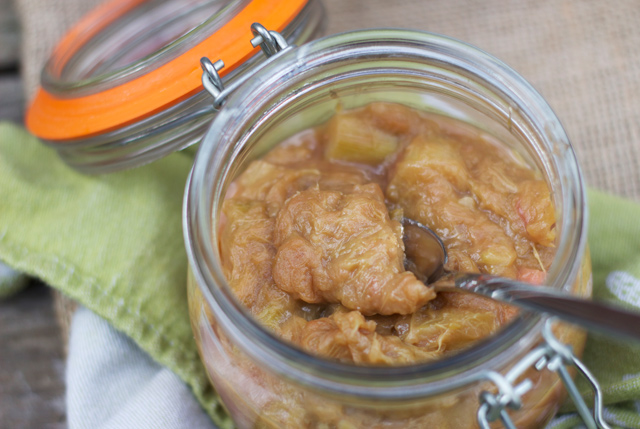 But this post isn’t biscuits, it’s about compote! Delicious, spicy, orangey rhubarb compote. Here’s how to make it, if you’d like to buy into the porridge dream when the weather turns cool, too. Right now it’s just wonderful served with natural yoghurt and a handful of dried nuts and fruit.

1. Put the butter, sugar, and half the orange juice into a large saucepan, and set over a low heat. When the butter and sugar have melted, add in the chopped rhubarb.

2. Sprinkle the ground ginger over the rhubarb in the pan. I used half a teaspoon, which gave a very mild but still noticeable (and wonderful!) back-of-the-throat warmth to the compote. If you’d prefer less gingery gingeryness, just use a quarter of a teaspoonful :)

3. Stir to combine the rhubarb and ginger with the other ingredients, then turn the heat up a little and cook gently until the rhubarb has softened. Stir frequently, and use a wooden spoon to help the rhubarb break down as it cooks.

5. Allow the compote to cool in the pan if you’re going to use it immediately, if not, whilst it’s still piping pour into sterilised jars and seal. I’m not sure of its ‘canned’ shelf-life, but intend to preserve some soon so will keep you updated.

6. Since the compote thickens as it cools, you might like to add in the rest of the orange juice from earlier in the recipe at this point to help it come back to a pouring consistency. Store refrigerated, and add to breakfasts (yogurt, porridge, granola), ice-cream, or even serve alongside a sharp cheddar. Yum.

p.s. I know butter isn’t a strictly necessary ingredient, but I like the smoothness it gives to the taste of the compote. It’s totally leave-outable, if you’d prefer. 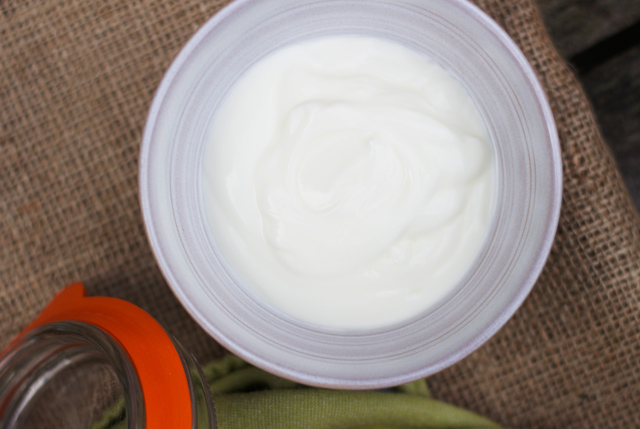 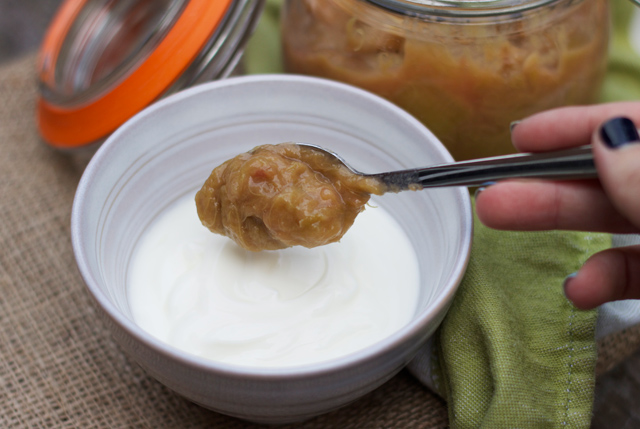 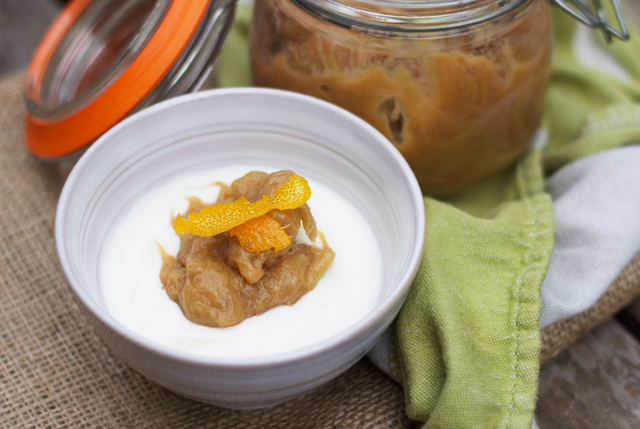 13 Comments
Posted in AUTUMN, FOOD, FROM MY HOME TO YOURS, RECIPE
Read from the beginning >