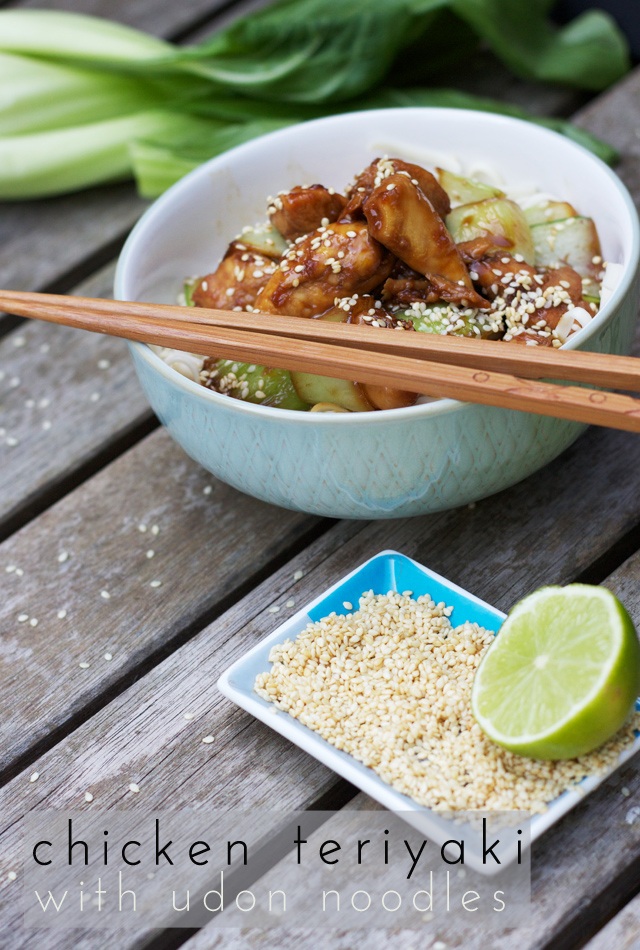 About a month or so ago, I went through a phase of being completely and utterly obsessed with Wagamamas Amai Udon noodles. I could quite happily have eaten those noodles three times a day with a little pot of kimchi as a snack in between, seven days a week. But since Wagamamas isn’t the cheapest and I’ve been wanting to learn to cook Asian food for a while now, I decided to have a go at making an udon noodle dish myself.

This dish, teriyaki chicken with pak choi, sesame, and udon noodles, has pretty much become my new favourite thing to eat. It does that magic thing of tasting better after it’s been sat around for a while, so can be whipped up in advance and reheated in a pan with an extra splash of soy sauce and sesame oil when it’s needed. Which is great if you need to do what I did, which was make it at about 3pm, take it all outside, make it up on the garden table where the light was best, tinker with it endlessly whilst taking photos, then dump it rather unappealingly in a bowl a few hours later for your partner to eat for dinner. Thank goodness it really did taste so great having been reheated, or my poor Jason’s grumblings about ‘manky blog leftovers’ would’ve been *way* louder ;) (p.s. the ** star thing? My new font doesn’t do italics, sob sob, so the stars will have to do for emphasis instead. Don’t talk to me about it, I’m not quite done mourning my beloved italics.) 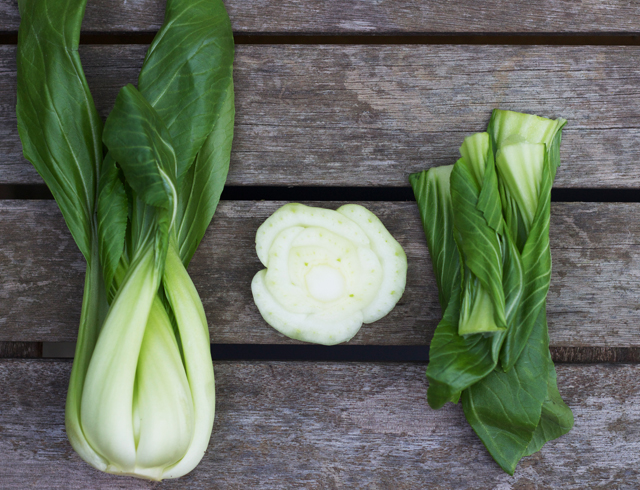 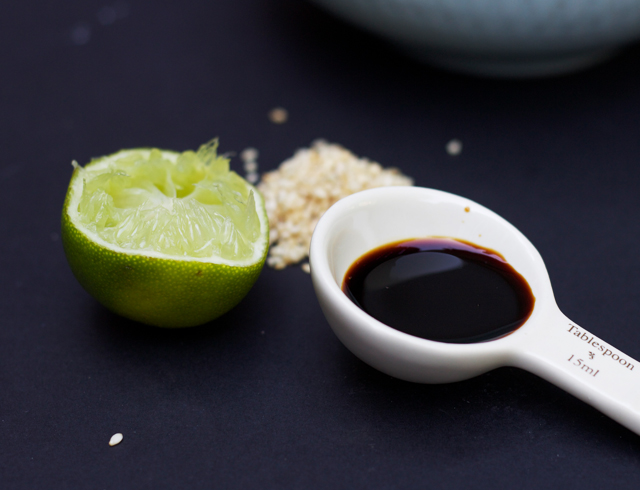 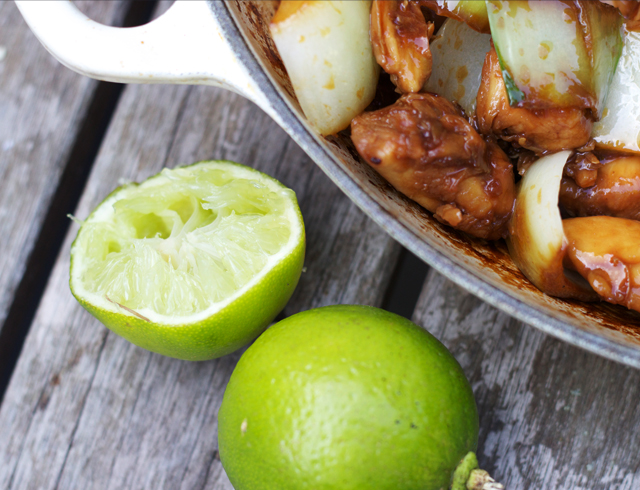 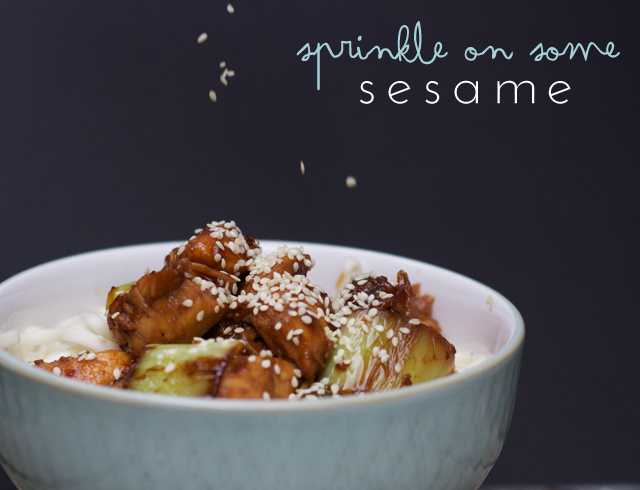 This recipe’s adapted from one of Nigella’s. When I grow up, I’d like to be Nigella Lawson, please. But really though, wouldn’t we all? I love how completely, unashamedly flamboyant she is, and that her recipes are absolutely failsafe. I did tinker with this one though, just a little. I’ve done away with 30ml sake (I’m certain noone but Nigella actually has things like sake in their kitchen anyway) and added in a squeeze of lime and a big bunch of pak choi instead (or is it bok choi?). I think it’s delicious.

1. Mix the lime juice, mirin, soy sauce, brown sugar, grated ginger, and sesame oil in a large dish. Cut up the chicken into bitesize pieces, and add to the dish to marinate. Leave for at least 15 minutes, but the longer the better.

2. Heat up some more sesame oil in a shallow casserole dish (or any pan with a lid) and, using a slotted spoon, take all the chicken out of its marinade and add it to the casserole dish. Cook the chicken gently until opaque on the outside.

3. Pour the marinade over the chicken, allow to bubble, then reduce the heat so it’s at a gentle simmer and cover with the lid. Allow it to cook, with the lid on, for five minutes, or until the chicken is cooked through.

4. Take out the chicken using a slotted spoon and transfer to a foil covered dish to keep warm. Turn the heat right up in the pan and let the sauce bubble away until it becomes dark and syrupy, then add to the chicken.

5. Chop up the pak choi (discarding leaves and root) into roughly one inch chunks. Add to the pan, and cook for a couple of minutes (with a splash of oil, if needed) until tender.

6. Whilst the pak choi is cooking, add the udon noodles to a pan of boiling water. Cook as per packet instructions (usually about 3 minutes or so) and drain.

7. Add the cooked noodles, chicken, and sauce to the pan with the pak choi, and stir until all the noodles are well coated in sauce.

8. Serve immediately with a sprinkle of toasted sesame seeds on top, or leave in the pan to be reheated later on. 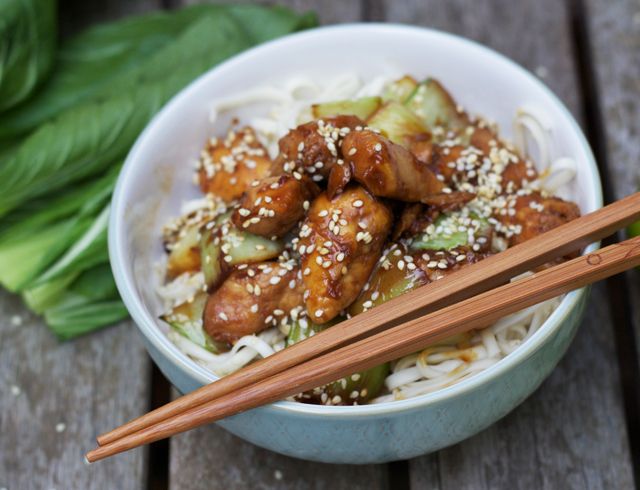 P.s. The chicken in this dish could easily (and deliciously!) be replaced with prawns, salmon, or even tofu!

P.p.s. Don’t forget to make the most of the ‘RELAUNCH15′ promo code currently available, allowing you to take 15% off any advertising slot purchased! They’re being snapped quickly, so click here or on the Sponsor tab up top to go and claim yours! :)

21 Comments
Posted in FOOD, FROM MY HOME TO YOURS, RECIPE, Uncategorized
Read from the beginning >